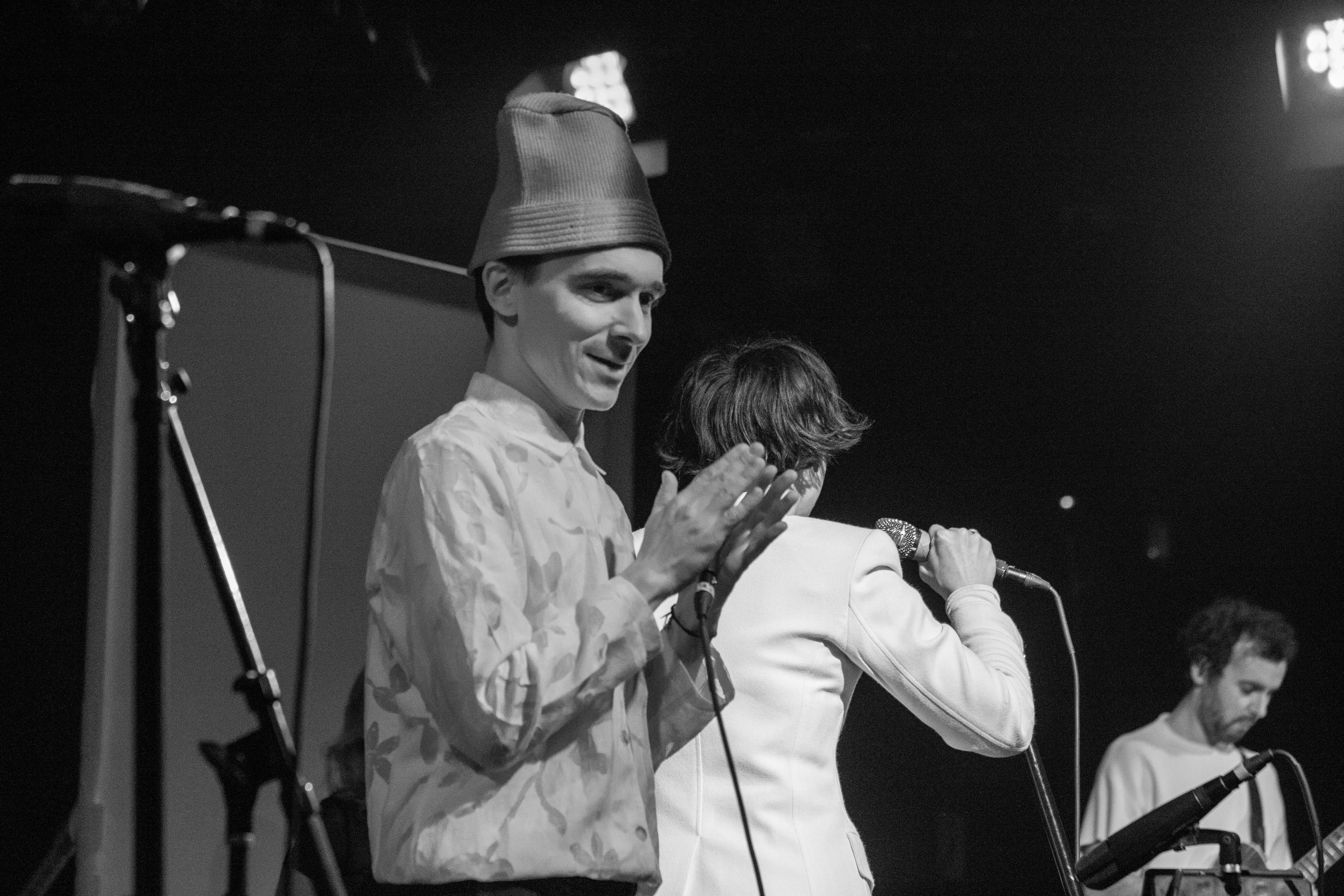 Just before Rubblebucket's Friday night performance at Paradise Rock Club, 88.9's Regan Harvey met up with founding member Alex Toth in the green room. The two talked about the band's latest album Sun Machine, food, and what the band has in store for the future.

REGAN : Hi! I heard you just got food, what did you get?

ALEX: Hi! Yeah, I went to Life Alive. It's my new favorite restaurant in the world. I got some sort of broccoli soup thing but the broccoli was sort of turned into a cream through, you know, whatever process would allow you to cremate a vegetable and turn it into a broth- they did that, and they did that with ginger, turmeric and jalapeños and it was mind blowing.I also got some sort of miso ramen thing that just… I almost cried when I ate it. It was so moving.

ALEX: Yeah, and then I got a green date smoothie earlier, just lovely. I wish this restaurant was around the corner from me.

REGAN: Cool! Alright, so your new album is called Sun Machine. I was wondering what the phrase means to you guys?

ALEX: Well the sun is a thing in the sky in the center of the solar system and it creates a lot of heat and a machine is something a human being makes and it is any number of things. So a sun machine would be some sort of cosmic organic hybrid of this celestial body and a person-made element.

REGAN: [Laughing.] I like that. So your live shows are really fun, vibrant and energetic. I was wondering if you could add any element to them, without any boundaries, what would you do at your live shows?

ALEX: Woah. The first thing I thought of right off the top of my head was some sort of way to make us floating but without cords. So that would require magic, but ideally there would be magic available and we could float around.

REGAN: Oh yeah, that's a great answer! Were there any tracks that didn't make it on to Sun Machine?

ALEX: Yeah, there were a lot of track, cause we had probably like, all the demoing is blending together but for Survival Sounds in 2013 we had like fifty songs and demos. That was only eleven-ish songs and a couple B sides. This time around it was like thirty-five demos and we narrowed it down to fifteen or sixteen in the studio. Yeah, there were a lot.

REGAN: Do you think you'll use those in the future?

ALEX: Maybe! Songs have interesting ways of coming back. We were gonna try to get the Aquaman soundtrack. Our publisher reached out asking us to submit for this theme song mermaid singing moment. I'm not saying that right, some sort of aquatic person heroine figure, they were looking for music for this climactic scene. A song that didn't make Sun Machine we tried to turn it into an Aquaman song and failed.

REGAN: Oh no, I'm sorry! Is it true you guys lived in Boston at one point?

ALEX: It is true, I was thinking about that today. It's so trippy. Because I lived here for three formative years,. Rubblebucket was started in Boston. We've been coming back over the years but now it's been, I don't know, at least nine years since we left Boston.

REGAN: And now you're doing a sold out show at Paradise!

ALEX: Yeah! We've done that a few times here, it is really awesome. I was just thinking how trippy it is that a place you used to call home can, there's nostalgia but it just doesn't feel like home and what time does. It's crazy, I can't put it into words unfortunately.

REGAN: No problem. We love the song "Fruity" at WERS and we were wondering what is your favorite fruit?

ALEX: My favorite fruit… I guess it's blueberries.

REGAN: Blueberries? That's a good one.

ALEX: Do you know what tigernuts are?

REGAN: No, is that a fruit?

ALEX: There's a tigernut milk I was thinking about getting over at Life Alive after this. I don't know what it is exactly, I'm guessing it's not a fruit, but I've been having recently some nut allergies I'm not sure what they are. So I've never heard of tigernut before but I'm really tempted to get this milk.

REGAN: Yeah, you should try it out. Tomorrow is your last show before a month hiatus, what are your plans during that time?

ALEX: I was thinking about doing some sort of food cleanse thingy and I was thinking about a meditation retreat. I have a lot of ambitions in this time. I wanted to redo my living room/studio space where I write music and record music and really upgrade it. A friend came over, another former Bostonite. His name's Vishal, he plays with Empress Of sometimes and he has a studio in Brooklyn called Black Lodge Recording. He came over and he told me how to make the acoustics good in the room, to acoustically treat it. So I don't know, it seems like a big project but I wanna do that and then make another record.

I have a new project called Tōth and I'm announcing that record in February. I've already released a couple singles online which y'all can check out at WERS. I wanna keep working on that music. Kalbells is also doing a tour of the entire country in that "time off." [Kalmia Traver] is going on tour with her band and Chrome Sparks all around the country.

REGAN: In one month?

ALEX: Yeah, one month. I'm also going on tour with Tōth for two weeks, opening for And The Kids who are from Western Mass. So I'm going to play solo shows - trumpet, guitar, and singing. So we're doing actually a lot of touring during our quote unquote time off.

REGAN: Oh wow, that's great! Thank you so much for talking with me. Have a great show tonight.

ALEX: Thanks for the interview!

Interview: Boston’s Brandie Blaze says, “This is my hometown, and I want to put on for my city”