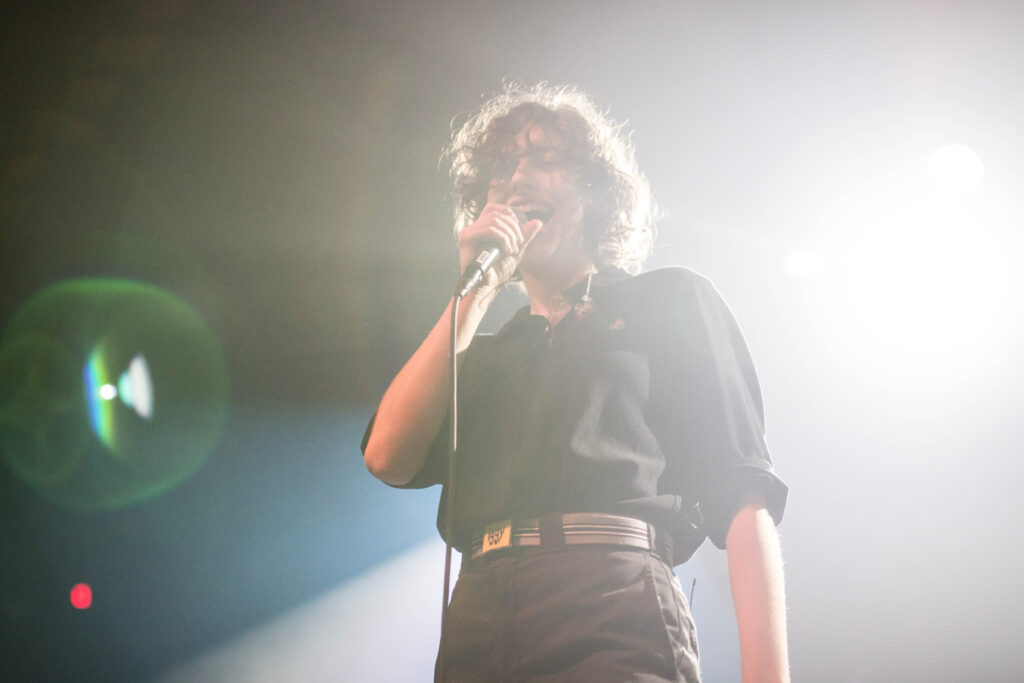 Singer/songwriter, producer, and multi-instrumentalist King Princess performed at Royale on Friday, January 25th. Before her show, WERS' Lily sat down with her for an exclusive interview to talk about her newest single with Fiona Apple, her upcoming album, and her current tour.

Lily: You released a new single with Fiona Apple today covering one of her older songs. What was it like working with her?

King Princess: She's a full icon. She's fully been such a supporter and such a great friend and collaborator. I feel so honored to have done that song because, first of all, singing a song sung by Fiona Apple is kind of an honor. It's about her ability level. I just believe in her as an artist, and obviously, the world does too. That's why she's so important to our music history. I also think that, on a personal level, her lyrics are so poetic and she's one of the most loving people I've ever met. I'm so thrilled. The song is beautiful and it makes me think "ugh, how'd you know? How'd you write a song that's so perfect?"

You've been working on a new album. Would you say that it's totally different from the vibe that you have going on right now, or is it something similar, yet different all the same? What's going on in terms of that?

KP: I mean, there are similarities because I produce everything. Production wise and as far as lyricism and themes I would say it's similar because it's the same people [working on the album]. In some ways, I think people will find parts of the new music that remind them of other songs, and I love that. It's like, of course, you should be able to have a personal relationship with this material. I should be able to look back when I'm older at my catalog and hear the evolution of me as a producer. I'm learning a lot. I feel really excited to share. It's also just so emotional.

Speaking of how you produce everything, you also do all the music, the lyrics, and the signing. You also do the mixing of your stuff. Why and how do you even get all of that done? [laughs]

KP: I mean, I do have help-that's how [laughs]. Mike Malchicoff, who's my engineer and co-producer, has been there since day one. He's just a homie. He does a lot of the technical stuff. He knows so much more. I'm just a little laptop producer. But I'm also really into analog equipment and I want the music to have soul to it. But I need him to help me get there. You really just have to learn how to produce. Learn the programs. Go buy yourself the program if you have the money to afford it, and learn. I'm calling out to the queer community to learn how to produce [laughs].

That's incredible! You're also on a sold-out tour right now. How has the tour been so far for you?

KP: Cathartic, and healing. It's really cool to work with a team of people who travel on a bus together. I've never taken a tour bus before. It's super weird, and I love it. I love it way better than the other tours, with the energy of the show and the energy of all of these kids. It's not just the EP anymore, there's the Fiona [song] and there are a few little other things. It's all prefacing my record. And I love these people at my shows. They're just vibing out to the music and just chilling, listening to my new record. They're being really gracious about it. To go up and play new material is so jarring.

For sure. I mean, you have no idea what the reaction is going to be.

KP: Yeah, you could totally feel like, "aw shit, I went to this show and didn't know a word, and my date was there and I was so embarrassed" [laughs].

Has the fan reaction been more than you could have ever expected on this tour?

KP: Yeah! Every time I encounter fan interaction, I'm always just like "you actually love me?" I'm also so scared [laughs]. It's a mixture that I'm so proud to have accomplished this, and also, I have this community of kids and of people who I don't know, but who are always down to talk about their queerness to me. They feel comfortable, and that's just really cool. To the people who are just there to listen to some good music, I'm like "what's up?"

Besides the tour, you've got Coachella, you're coming back for Boston Calling, and there's the Governor's Ball. All this stuff is going on this year. How excited are you for everything that's coming down the pike for you?

KP: So excited, but also so scared.

Have you ever done a big circuit like this before?

KP: Bitch, no! I've been in this for nine months now, and I'm freaking the hell out right now. That's the thing, though. You have to find a regimen for yourself. I'm going to be doing my first record cycle. Just learning about what that entails, and just learning my part in it and making sure that, on my end, the creative stuff is exactly how I want it. It's amazing to have a heavy hand in it, but it's also really stressful and emotional. I think it's cool I get to attach myself to art like this, but for anyone who does it, you know it's hard. It's hard to finish something with a team of people. Everyone's agreeing and finally, it's like, "guys, we're ready." That's super hard. It's me and my music, but it's also for the people that I work with. They're running this.

Absolutely true. Well, I think that's it for me! Thank you so much, and have fun at the show tonight!