May 23rd at the House of Blues was a special show for Passion Pit.

The brain behind the act, Michael Angelakos, is an alumni of Emerson, making this show even more special. Nearing the end of the 10 year anniversary tour for the project's breakthrough album Manners, Angelakos told the grateful audience, "I've always said touring isn't for me. But this tour happened and I've never been happier in my life."

Ten years on, it has never been clearer how strongly Manners resonated with people of all ages. Everyone in the crowd, young and old, seemed to remember all the lyrics and sang along with Angelakos as best they could-though few could match his super-high pitched delivery.

Angelakos' stage presence makes him seem like a normal guy who just happens to have a totally unusual voice.

He was dressed like he rushed on stage after just getting off a shift at the office, but he sang with a voice that's so high that it's hard to believe it's actually his. The sugary synths and guitar lines-which hit even harder live-perfectly complimented his whimsical singing. The band stayed in the background, giving Angelakos the full spotlight, but their performance was essential to the energy of the show.

In another special moment, Angelakos reminisced about the first time he played one of his biggest hits, "Sleepyhead."

"I don't remember where I first played this song," Angelakos said. "I think it was at the Great Scott." He said he remembered writing the song in Cambridge while he was studying at Emerson. He couldn't have imagined at the time how many people would love the song for years to come.

After playing Manners in full, Passion Pit played some of their later hits, most of which were highlights from 2012's Gossamer. Though it's hard to match the nostalgia of playing a 10-year-old album, the second half of the show came close. Songs like "I'll Be Alright," "Carried Away," and of course "Take a Walk" are so openly earnest that it's not to get sentimental while listening to them being performed live.

Passion Pit lived up to their name with a genuinely heartfelt and passionate performance.

Considering Angelakos' very open struggle with mental health issues in recent years, it was heartwarming and hopeful to see him clearly express so much joy on stage. At the end of the show he expressed his gratitude to the his band and his fans-who were just as grateful to him as he was to them. 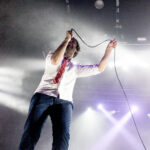 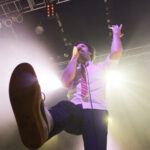 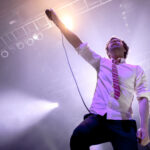 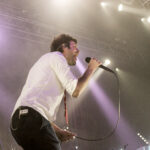