Ten Albums that Came out Ten Years Ago 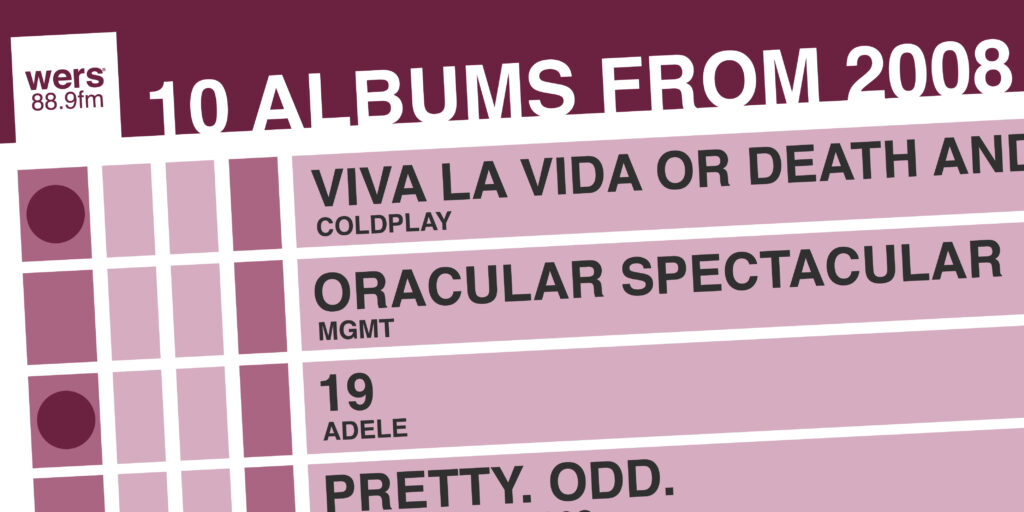 With the end of 2018 on the horizon, you music lovers out there are probably already looking to see what the new year will bring to the industry. What new artists will release an album? Who will you go see on tour? Will one of your favorite bands finally get back together after years and years of a supposed "hiatus" which you know really just means they're all spending time in the Bahamas while you're in your bedroom grossly sobbing over their last album?

I'm not naming any names. I just feel like this has happened to me too many times for me to not be bitter about it. Anyways…

While it's always exciting to scope out what's going on in music's near future, I thought it would be fun to turn back time and reminisce about ten albums that came out ten years ago in 2018. So, hop in your time machine and take a trip down memory lane with me as we bring to mind some classic albums that changed music forever.

Perhaps one of the best-selling debut albums of all time, Vampire Weekend's self-titled work was an instant success with the young adults of the mid-2000s. Coming straight outta Columbia University, lead singer Ezra Koenig and the rest of the band wrote about everything from their confusion towards the Oxford Comma to their excitement for Blake getting a new face. It's no wonder that Vampire Weekend became a viral sensation during a time when music was becoming increasingly genre-bending. Their airy, ska/pop/rock infusion was the perfect storm that put them on the map for music lovers craving something totally different.

To be fair, this album was actually released in 2007, but didn't come out in hard-copy until 2008-so I'm adding it to this list because, in my mind, this one just makes the cut. Believe it or not, Oracular Spectacular was not a national best-seller in any statistical sense of the term. However, their song "Kids" did earn MGMT a nomination for Best Pop Performance by a Duo or Group at the 52nd Grammy Awards. It seems like this album has yet to leave the consciousness of true music lovers around the world; there's hardly a time when I walk into some indie store or hipster hangout and don't hear "Electric Feel" playing softly in the background. There's something about the psychedelic rock vibe of this album that makes it such an easy listen-it's like a tranquilizer dart for the soul.

Ugh, #tbt to when Adele was trying to decide if she should give up or just keep chasing pavements. I think we're all glad that Adele kept on her grind and gave us 19, the album that launched her into the limelight. Adele's soulful tone and vintage vibes, which are incredibly reminiscent of Amy Winehouse, were just what the overly pop-saturated year of 2008 needed. Among a league of Katy Perry's and Miley Cyrus's, Adele's soul/R&B infused pop brought popularity to a sub-genre on the rise in the industry. It's hard to believe that ten years ago, Adele was just releasing her first album. Now, she's selling out arenas among the best of them. Girl power at its finest.

2008 was just around the time that the pop-punk genre was making its big transformation to "alternative rock." Simple Plan was one of the few bands to take that first step towards a sound that was more reminiscent of the good old rock n'roll, while still retaining the pop-punk vibes that made them popular in the first place. Listening to this album brings me right back to Warped Tour in the dead of summer, ripped black jeans, and unnecessary fingerless gloves. This album marked another transitional point for Simple Plan, as their lyrics went from teenage angst and rebellion to more adult themes like love, loss, and misery loving company. Simple Plan demonstrated not only the band's ability to adapt to the changing times but also their ability to grow along with their audience.

Aka the time when emo music went folk-rock. Arguably Panic!'s least popular album ever, Pretty. Odd. is one crazy, psychedelic, folk-rock ride that shook Panic!'s fanbase to the core. In my opinion, it was a risky move for a sophomore album from a band just making a name for itself, but it was a risk that ultimately paid off for Panic!. The fans who love this album became the basis for Panic!'s hardcore following that would stay with them for years to come. Additionally, the album's unique blend of genres made Panic! hard to ignore-it was, well, odd, but ingenious all in the same breath. Plus, this album gave us "Nine in the Afternoon," a song that makes me want to break out my old keyboard and start maniacally banging my head on the keys. Emo kids forever!

At this point in the list, it's clear that the psychedelic genre was getting a lot of love in the mid-to-early 2000s. This album is no exception. M83's notorious, near lyrically-bereft style was one of the first of its kind and blazed a trail for other artists to start experimenting more with sound and less with lyrics. In fact, I would argue that this album helped to introduce the genre of EDM to the States. Saturdays=Youth isn't strictly a work of EDM, but the focus on psychedelic beats and progressive rhythmic layering helped get the U.S. music scene used to the idea of EDM as the genre being more than something only for the clubs.

If you were alive and aware during 2008, you probably saw that Apple commercial of Coldplay singing "Viva la Vida" with unnecessary clouds of smoke exploding all over the place. This album skyrocketed Coldplay into the public eye. There was not a middle school talent show that you could go to that didn't have a group of eighth-grade girls in handmade t-shirts dancing to a song from this album. This album won Best Rock Album at the Grammys in 2009 and earned Coldplay a number one spot on the charts in both the U.K. and the U.S. This album also includes the song "Lovers in Japan," which I personally think is one of Coldplay's most underrated songs out there.

You couldn't listen to any radio station in 2008 without hearing Kings of Leon. Flip to one station and "Use Somebody" would be blasting through the speakers-when you got tired of that song, you'd change the station and immediately run into "Sex on Fire." Unlike their new alternative rock peers, Kings of Leon blended a more southern take on rock and roll to bring forth Only by the Night, an album that gave the band its first number one spot on the Billboard charts. You can best believe I used to air guitar to this album while playing it on my old portable radio while my grandparents yelled at me to turn it down.

Another emo record to go down in history. Similar to Pretty. Odd., Folie a Deux was certainly not Fall Out Boy's most popular record. However, among Fall Out Boy's more hardcore fans, Folie has become something of a relic-it was their last album before their famed four-year hiatus in 2009. While Folie still stayed true to Fall Out Boy's pop-punk roots lyric-wise, the music itself blended punk with classical string instruments and several piano solos. There were also several collaborations with artists like Elvis Costello, Brendon Urie, and Travie McCoy. Probably my favorite Fall Out Boy album of all time, Folie a Deux bookended Fall Out Boy's pop-punk era and helped to usher in a new wave of emo culture that has lasted to this day.

Known for its singles "Spaceman" and "Human," Day and Age is The Killers' most experimental album of their early days. A cross between dance-rock and (once again) psychedelic music, this album is probably one of the lesser known works by The Killers, and yet still has a major cult following among fans and lovers of the genre alike. Though the critics gave this album so-so reviews, I personally think it's a feat in and of itself for a band to experiment in this way, and still come out with a strong fan-base on the other side. In a time like the 2000s when music was going through a genre evolution, The Killers managed to take advantage of the changing atmosphere of the music industry and make an album that was experimental, but that still adhered to the classic Killer dance-rock.

Our Favorite Local Albums of 2021 So Far

Our Favorite Local Albums of 2021