Live Music Week wouldn’t be what it is without live music! Join us on-air as we debut some brand new live sessions and dig up some of our favorite archived sets, some as far back as 2009. Read on for our list of can’t-miss songs and to find out when you can tune in to hear them.

Shortly before Spoon put out their latest (and tenth!) album Lucifer On the Sofa, Britt Daniels sat down for an interview with WERS and the band put on a live session for us. Rather than just airing it, we opted for a fun-filled all-day celebration called “Spoon Day Tuesday.” If you missed Spoon Day, you’re in luck! We’re re-airing the live session Monday at noon to kick off Live Music Week strong. Listen for the biting lead single to Lucifer On the Sofa titled “The Hardest Cut,” among other killer tracks!

Ever wanted to dive deeper into the discography of Deep Sea Diver? Monday evening is your chance! The Seattle, Washington-based trio showcases the perfect sampling of their music in the archived live session we’ll be airing, originally recorded in 2017. Don’t miss their performance of “See These Eyes,” especially — the vocal fluctuation from Jessica Dobson on the 2016 track is nothing short of beautiful!

THE REGRETTES - TUESDAY AT 12PM

The Regrettes wowed us with their in-studio performance, recorded just last week. Join us to hear this never-before-heard live set. Their track “Monday.” the lead single to the recently released album Further Joy, marked the Regrettes’ first new material since 2019. Showcasing a high-energy pop sound, it saw the band make an impressive return. You can hear “Monday” and more exciting samplings from the Regrettes live session on Tuesday starting at noon.

We’re digging deep into our live mix archives to re-debut this incredible 2009 performance from Russian-American singer-songwriter Regina Spektor. It may be over a decade old, but the timeless sound and the transferable messages in Spektor’s lyrics will surely speak to listeners today. Make sure you don’t miss it by tuning in on Tuesday at 6 p.m.

Ripe’s recent live session is extra special to us, as it was the first one we were able to record at the WERS studio since pre-pandemic. It had been 785 days since another band had been with us in-person, and Ripe made us remember what’s so special about it. The Boston-based group of seven brought so much passion to their performance that we can’t wait to debut it! Make sure you join us Wednesday night to hear their latest single “Settling.” The accents of trumpet and the catchy guitar riff in the song bring a fun, energetic summery-feel.

Just this past February, Grammy award-winning folk artist Aoife O’Donovan put on a chilling hometown performance at the Sinclair. And just before doing so, she sat down for an interview with WERS and delivered this all-acoustic set of tracks from her new album Age of Apathy. Be sure to catch her effortlessly airy vocals and talented strumming on the emotional track “Phoenix,” airing during her live set Wednesday evening.

Alt-J have carved out their own space in the indie-alternative world. They can deliver something more serious with a sad, ethereal-tinge like “Lovely Day.” And they can also deliver something more playful, like one of their latest singles, the impossibly catchy “Hard Drive Gold.” This recently recorded live set for WERS is representative of this range. Make sure you tune in to hear it Thursday at noon!

This performance from Lo Moon was recorded as a part of Live Music Week of Fall 2017, so it’s only fitting to bring it back this Live Music Week, a little over five years later! The first track they perform, “Thorns,” is a beautiful introduction to Lo Moon for anyone unfamiliar with the band. Beginning with just the keyboard, the track’s soundscape builds into something gentle, yet lush with Matt Lowell’s vocals guiding the way. Catch “Thorns” and others Thursday starting at 6 p.m.

The War On Drugs had just put out their fifth studio album I Don’t Live Here Anymore when they gave us this live mix in late 2021. Frontman Adam Granducciel had also recently sat down for an interview with WERS. The incredible performance shows the way the band has only further matured into their sound. The new album’s title track “I Don’t Live Here Anymore” is one to look out for. While indie-pop group Lucius wasn’t able to join on backing vocals like they did for the version packaged in the album, it shines nonetheless!

Pulled from our archive, this performance from Adia Victoria is the perfect way to close out our week of live sets. Victoria came into the studio alongside a pianist in 2019 to record the mix, the same year she released her sophomore album Silences. Adia Victoria’s self-described “gothic-blues” style is incredibly distinctive and powerful. One of several gems from the live mix, “Different Kind of Love” is particularly emotionally-stirring. It will not only linger in your ears, but also your heart long after you’ve heard it. 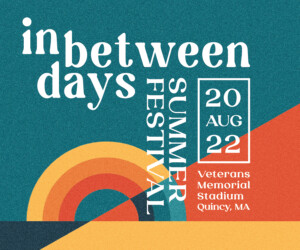