Leisure comes back to Emerson for Wicked Local Wednesday 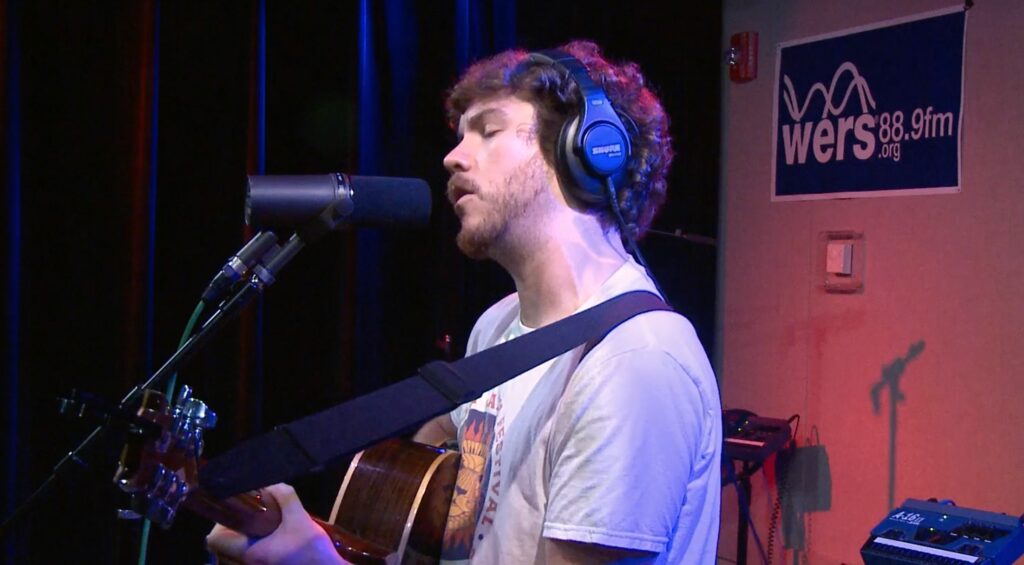 Leisure, an Emerson alum and a singer-songwriter, stopped by for WERS's "Wicked Local Wednesday" special to perform some of his music. Among other things, he talked about how being a student at Emerson shaped his music and how he becomes inspired to write songs.

How did you get started performing?

Leisure: I was just a kid who was really into AC/DC and Led Zeppelin. I had some friends who played and I started out playing bass. My friend's band needed a guitarist so I started playing the guitar. Pretty much from a young age, I had an interest in rock, from there the interest just grew. It was about having fun. It wasn't until the songs started to have meaning that it actually became a part of me instead of just a hobby.

You said you started out in a band and then became a solo artist, how has that affected your music?

Leisure: A lot. My band in high school just stuck to grunge and classic rock covers. But then I did have the band where I got the Leisure name and I was sort of the orchestrator behind that, it was just my friends pulled together. When you have a band, you're not in control. Everyone has a say. That can be good and bad because you might have a really great idea but no one will be with you on it, or vice versa. When you're solo you can do whatever you want, but there's no one there to tell you "actually that sucks." If I have a band, it changes my writing style because I'm thinking about writing more parts. But when I'm writing a song solo, I have to think how can I make this the best I possibly can by myself. They're both great, and terrible, at different times.

How do you find the inspiration to write your songs?

Leisure: Life. I know it sounds like a cop-out of an answer. I have a few songs where I maybe tell like a story or two, but it's mostly just based on people I know or used to know and experiences from growing up until now. Life happens and then if you want to turn it into a song, I hope to try to make the best song I can out of it.

What do you love the most about performing live?

Leisure: The thrill of being on the stage and being able to move around and belt like that. I have a high voice as [WERS listeners] just heard. It always happens so quick. It's like how people get a rush doing sports or something like that. My rush is [performing], especially if people are attentive, that's even better. Sometimes you play to an empty room, sometimes you play to a noisy room. But when you get those shows where people are actually listening to you, that is really a big thrill. It's like "Oh, I enjoy this, maybe they're also enjoying it!" and we're all in this together.

You're an Emerson alum. How has Emerson College and the greater Boston area influenced your music?

Leisure: I was always writing when I was in college. Emerson was the first place I really got to play out as a solo artist. I played at the Cabaret, the Multi-Purpose Room, the other room in the Little Building whose name I forget. I think I played solo twice before I got to Emerson. I jumped onto any show I could and it actually really did help me with my performance. All I had to do was sign up and do two or three songs. Sometimes if people liked you they would bring you back to their own shows. Being here then was great because I really got to blossom. Being back now to get into the scene as a solo artist, it's nice to get involved with other musicians and open mics and see what's available for me. It's been good for two different phases of my life.

What is your goal with your music?

Leisure: Ideally I feel like anyone who makes music would like to go on tour and sell albums and do it for a living. If I could make it a living, that would be amazing, but honestly when I write my songs I'm pretty much just doing it for my own sake. I'm writing them for me, I know that sounds selfish, but then I bring them out and if people like them- that's great. Really it's like a thing I do for me, but if I could make a living off of it, of course I'd like to make a living off of it.