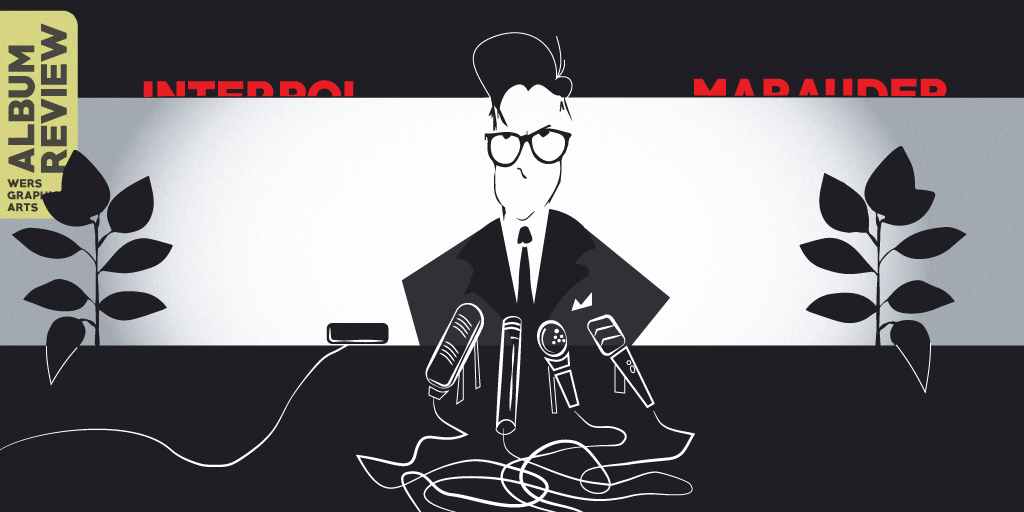 Marauder is an excellent sixth installment to Interpol's already impressive and impactful discography.

Recorded over a period of two years, Marauder is a testament to post-punk revivalism and making indie rock theatrical again. According to Interpol themselves, Marauder is a concept album. Lead vocalist Paul Banks has stated that the "marauder" is a character that symbolizes "the portion of your personality that isn't really concerned with accountability and just kind of does." As a result, when speaking of the opening track, Banks stated that the song, "really speaks to the idea and character of the 'Marauder'"- who he then went on to describe as vulnerable and lonely.

The lyrical content of Marauder matches up with this character description. Each song sounds like it's being sung from the jaded perspective of an outsider. The music is dramatic, with searing electric guitars accompanying Banks' beautiful melodies. Marauder is Interpol's best work in years, and fans are sure to rejoice at what could be the return of some of indie's greatest musicians.

One of the most remarkable moments on Marauder is the lead single, "The Rover".

It makes sense why this song is Marauder's lead single. Opening with an infectious guitar hook and pulsing drumbeat, Banks invites listeners to open themselves up to enlightenment. Moreover, when speaking of the song to Genius, Banks describes being inspired by Americana and the desert. Also, there is something remotely cult-ish about the song's lyrical content. The figure that Banks sings of preaches to listeners a doomsday-esque message, asking people to listen to his teachings. The track is eerie yet inviting-and it definitely sets the tone for the rest of the record.

The appropriately-titled tenth track on Marauder, "Number 10" is definitely one of the highlights of the album.

Lyrically, the song describes a workplace romance between a woman named Ella and her unidentified supervisor-who also serves as the narrator of the song. However, when Banks speaks of the track in a video posted to Twitter, he has a clear vision of what he is singing about. He describes Ella as, "a mature woman, perhaps older than the narrator who's maybe new to the company and he works in a cubicle. I see her as a Latin lady, maybe mid-forties [...] and he's very frustrated by the oppressive nature he feels."

The song opens up with a lush guitar riff that echoes and creates a soundscape of sorts. On this track, Banks sings with severity and longing, wailing to Ella out of confusion. In the most delightful way, the song sounds like it's by an English garage band in the sixties. The intensity of Banks' vocals on this track is unparalleled by any other song on Marauder.

The emotional pinnacle of Marauder actually serves as its final track, "It Probably Matters."

Thus, the title alone sounds like a sentiment from a worn-down individual. While most of the songs on Marauder tend to have interpretive and vague lyrics, "It Probably Matters" is a notable change in this trend. The message is straightforward and direct, and Banks is at his most vulnerable in this song. At one point he inquires, "Why did you ever hesitate to be mine?" In an interview, Banks stated, "It's like an impressionist film about a defunct relationship-the remorse, guilt, and shame that can nag us through the haze of afterthought." Banks sings of being on the beach side with his friends, wanting to see his love dive into the water. It is a simple wish, yet he never seems to get it fulfilled.

Across the course of this song, he asks for answers and reflects on a failed relationship. The song has elements of shoegaze music, with reverb-filled guitar hooks cushioning Banks' sorrows. It is a beautiful and bold way to close out Marauder, and it's likely to leave listeners with their jaws dropped.

Interpol's Marauder is their best work in years.

Moreover, Dave Friedmann's production on the album encapsulates the driven, invincible quality that makes Interpol's music so addictive. There are numerous stellar qualities about Marauder. First, the lyrics are vague without being posh. Second, each song follows a trajectory of its own, inviting listeners to embark on an adventure. Third, throughout the entire album, there is an undeniable sense of longing coming from Banks' vocals. What he is yearning for remains indistinct, though listeners get clued in during "It Probably Matters." Marauder is something of a comeback album for Interpol, and longtime fans are sure to enjoy this fine addition to their legacy of guitar-driven indie mastery.

The Return of Lorde