In Studio with Adam Ezra 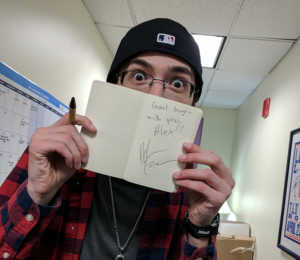 88.9’s own Alex had the chance to talk with local breakout artist Adam Ezra on Tuesday afternoon. They talked about inspiration, incentive packages, and Ezra’s new record, “Hurricane Wind.” To watch Adam perform 100 Year Storm, Let Your Hair Down, and Steal Your Daughter, visit our in studio page.

ALEX: Were you ever, at any point, putting all that creative control – the album title, the album artwork, the songs on the record – ever nervous about how it would turn out?

ADAM: Oh yeah, totally! And I would say that it was, the vision was for it to be a team effort, for it not to be about the fans making all the decisions, but for us – me and my band and the awesome team that I have around me, the Adam Ezra Group as well as our fan community to kind of all be figuring it out together.

The thing I love the most about it is – and you know, I never knew any of this before I was a musician – there’s just so much that goes into making an album. We started with these really rough demos, just me playing a guitar, and then we took the fans into the studio with us virtually and showed them how we arrange songs together as a band in the rehearsal space, and then how we lay down what’s called a “scratch track” where I just do a pass of guitar and vocals to a metronome and then the rest of the band builds the arrangement around that. And then I come in and I’ll record the final guitar and the vocals on top of that. So, the whole process, which I think is fascinating, was something I was excited to share with the fans.

ALEX: Absolutely, so you would say this one’s very different than your previous work because of that?

ADAM: You know, every album, we’ve always come out with has always been a significant change from the album before. I think that that’s the thing that inspires me about music and about art, it’s that it evolves as I evolve as an artist, as we evolve as a band, as our community evolves around us, so there’s never been a release like this before with our band and there will never be another one like it again. I can’t wait for the next time I get to go into the studio again after this one – it was so much fun and I hope that we can continue to bring our community along with us as we do it.

ALEX: Absolutely. So what was the greatest lesson that this whole journey gave you and the band?

ADAM: That’s a really good question. I think, I’ve always known this in theory but this process really solidified this lesson for me, which is to trust in the people who love our music. And that’s a hard thing for an artist to do, to have to have faith in the folks that are coming out to see the shows, people that you don’t know!

But there is something universal that connects us all, I believe, and that’s what our music tries to speak to, and the people that are feeling that, they had really good opinions on this, so that was a good lesson reinforced for sure.

ALEX: And it came out a-okay, I think.

ADAM: Thanks, man, I’m so glad that you guys like it and I’m so honored that WERS is spinning some of these tracks. I think you guys are just the coolest station, always supporting grassroots, independent music, which, to me, is the best music out there. And the way you guys do what I love and the fact that my music can be a part of what you’re doing is just, it’s a thrill for me.

ALEX: We appreciate that very much! There was one other question I had off the top of my mind, and that was, looking at your crowdfunding page, there’s a lot of really fun and interesting prizes…

ALEX: … a day in the mountains with you, homemade cookies from the violin player…

ADAM: That’s right! We had a lot of fun with that stuff.

ALEX: How did you guys come up with some of those?

ADAM: You know, we wanted to, we were trying to think about all the different ways we wanted our fan-funding project to be different. And one of the things that I love about us as a band is part of our mission: we try not to take ourselves too seriously. And so we wanted to create some kind of fun and really stupid incentives for fans. Like, there was one where if they pledged a certain amount of money they could get a signed empty whiskey bottle.

ALEX: And you promised that the handwriting might be a little sloppy on those signatures!

ADAM: [Laughs] You actually read all of them!

ADAM: I love it, man! Yeah, we had a lot of fun, I mean, coming up with the ideas was total fun. The cool thing about this, the thing I love about us as a band, the goal was not to raise X number of dollars. The goal was to get as many people as we could involved. So the goal with our pledge incentives was to make people laugh as they were reading them, and so we got some good feedback on that.

ALEX: You definitely achieved that. That’s why you took down the fan-production bit from instead of $250 all the way down to $10…

ADAM: That’s right, when we were thinking about this project, and this idea of having fans produce the album with us kind of evolved over as we were putting this thing together. When we were first putting these incentive packages together, one of them was, “produce this album with us, decide on the demos.”

We would just write down these ideas and we would give them to our management company, and they would put down prices, and so I was looking at that one and it was like $250 and I was like, “Well, you know, I think that’s a pretty cool thing to offer fans, but you know, I want everybody to be able to do that, that’s really fun, you know?”