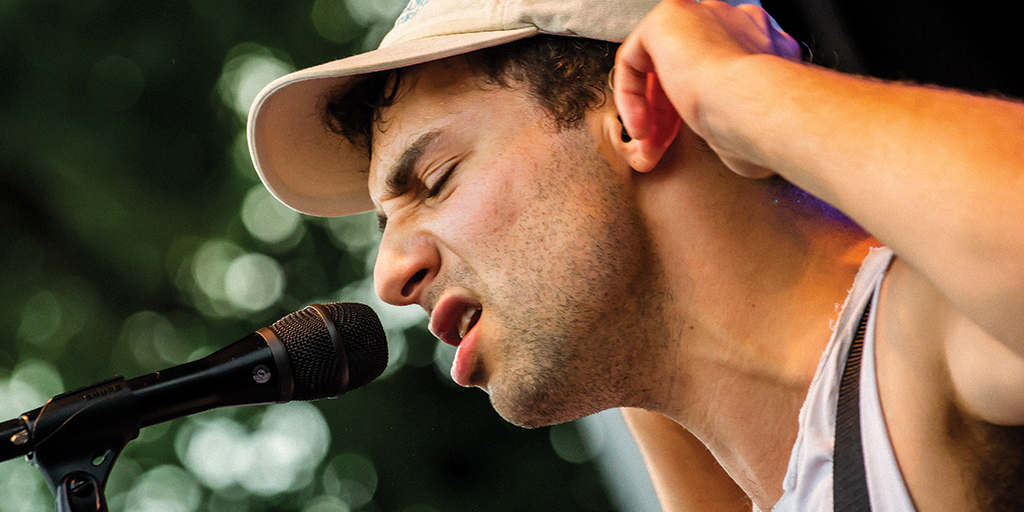 Saturday marked the inaugural run of the Wicked Good Festival on the Boston Common, hosted by us, WERS 88.9FM and Emerson College. The festival celebrated the spirit of public radio by hosting a free concert open to all ages. Along with our partners and vendors, the eclectic range of musicians attracted a variety of attendees, young and old, human and canine. Friends set up blankets and picnics, families tossed frisbees, and everyone enjoyed the unexpectedly warm weather.

JahRiffe & Jah-N-I Movement kicked off the afternoon with some reggae tracks.

The endearingly cheerful lead singer JahRiffe invited the crowd to "enjoy the vibes and share this energy." The band's style is a roots influenced reggae with subtle elements of electronic and rap. As described by Jariffe, the unique sound stood for freedom of the mind, body, and soul. The musician introduced his band as members of the movement and told the crowd that they had become part of the movement by enjoying their music together. JahRiffe concluded the set with the sentiment, "Rasta can't fade." 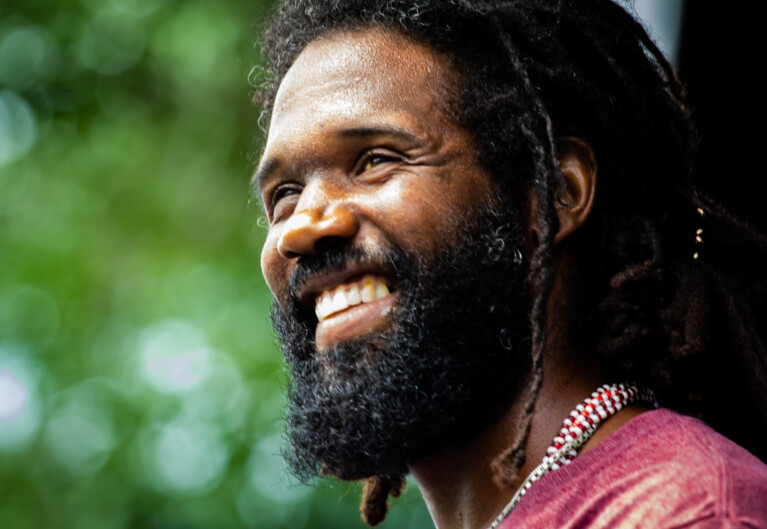 Next on the stage was Anjimile.

Despite a bleak weather forecast, the sun shone as the self-proclaimed queer song-maker began their set with a solo vocal piece. Two singers in summery yellow floor length dresses then joined them. One played a handheld synthesizer. The three musicians had undeniable chemistry together. The trio's ambient harmonies mesmerized the audience. Anjimile got on the lineup by winning WBUR's "Wicked Good Boston Favorite" competition earlier this summer with a performance of their song, "1978." They delighted the crowd with a soulful cover of Justin Timberlake's "Cry Me a River" before finishing on the folky track, "To Meet You There." The cheering from the crowd that followed was remarkable for a second act at a festival and well-deserved. 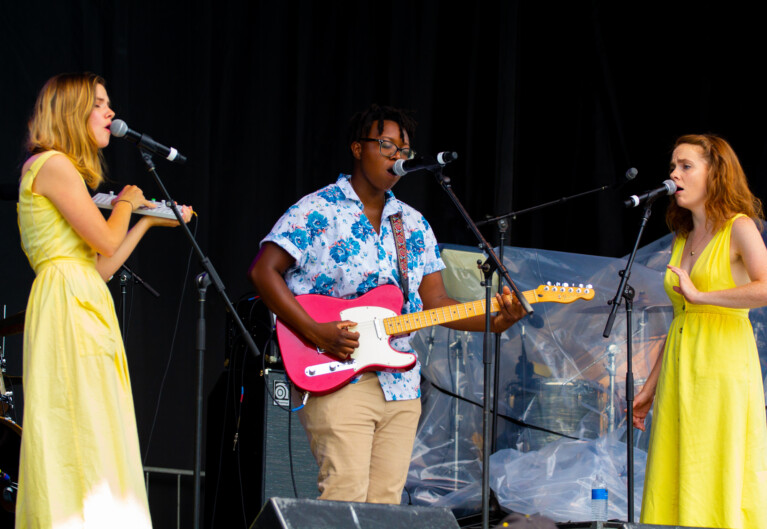 Next up were some good friends of WERS, Air Traffic Controller.

The five-piece band pumped up the crowd with a call and response for their hit song, "Hurry Hurry." The song's dark lyrics and upbeat sound were a perfect contrast, much like the weather that couldn't decide between stormy and sunny. Local musicians MB Padfield and Julie Rhodes joined the band in turn for a few songs. Then, all seven joined together for a performance of the lyrically uplifting track, "Live In."

The crowd grew larger still, drawn to the foot stomping sound of indie folk pop. Staying in the festival's theme, lead singer Dave Munro introduced "Bad Axe, MI;" which is about the Boston music scene. He said this is the last song of the set. However, at the songs end, the crowd continued to chant back the chorus of the track, "one more song, one more song!" The band conceded to the audience's request and ended on the aptly named track "Get It Over With." Thus, Air Traffic Controller became the only band at the festival to play an encore. 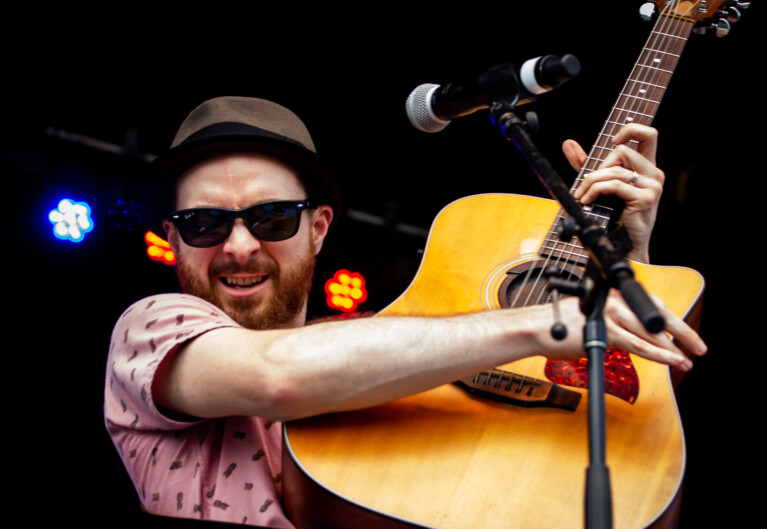 After Air Traffic Controller left the stage, The Party Band surprised the crowd with more music.

Hailing from Lowell, The Party Band is a twenty-something unit brass band. The group is known for sporting wild purple outfits, screaming, and bringing the "booty shaking music." A cluster of hula hoopers performed tricks behind the band as they played near the stage. The group then made their way through the crowd and up on the Boston Common hill - keeping energy high between sets. 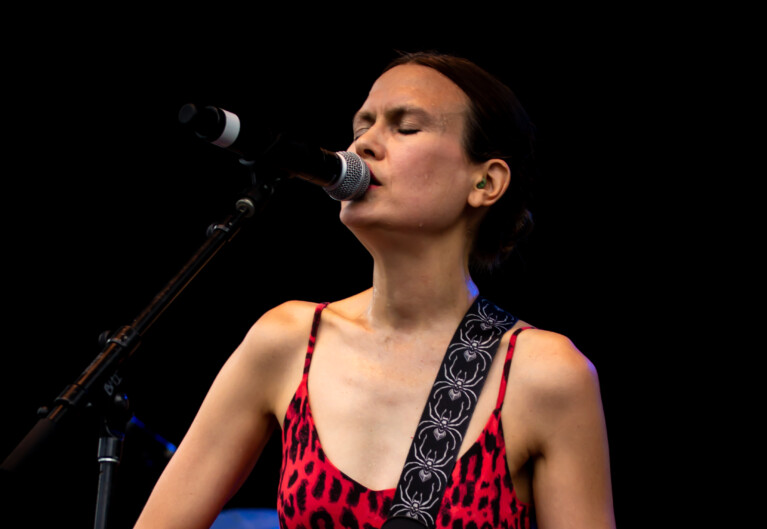 Juliana Hatfield took the stage just as the weather started to take a turn for the worse.

Despite that, the seasoned rock artist didn't let foreboding clouds scare her off. She wryly told the audience to "thank the weather gods" for holding off the rain. Active since the early 90s, the prolific musician played music both from her solo career and from her former bands, Some Girls and Minor Alps. As a well loved early alternative rock star, Hatfield drew many older attendees and families. Hatfield's intense gaze was matched only by her fire truck red cheetah print tank top. It was apparent her tough look wasn't just for show. Her guitarist informed the audience that she had been in the emergency room just the night before and was performing with a broken toe.

Finishing up her set, Hatfield performed a three song set from her Olivia Newton-John tribute album including a rocking rendition of the iconic track "Let's Get Physical." Hatfield said she felt incredibly inspired by the bold, provocative musician in her youth. 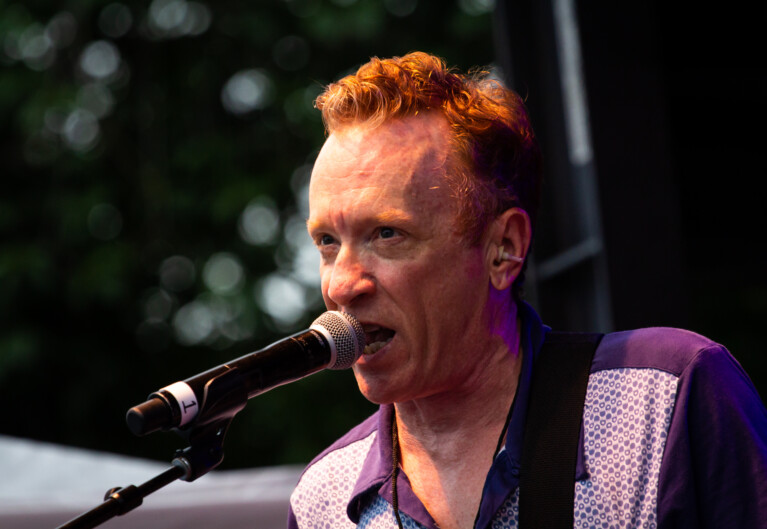 Buffalo Tom was up next, beginning their set with a question that might strike a chord in many Boston students:

"How long does one have to live in Boston to be a Bostonian?"

After their musings the band kicked off their set with "Summer," reminding the crowd of the season despite the cold. The trio has the charm of a dad band, but with a career that actually took off. In fact, Tom Maginnis, the drummer after whom the band was named, has a daughter currently attending Emerson. A few songs into the set a cord came out of lead singer Bill Janovitz's beat up electric guitar. Janovitz continued the song masterfully despite the malfunction and the crowd was even more amped after a stagehand plugged it back in. Bassist Chris Colbourn joked that there were no soundchecks at Woodstock either.

Buffalo Tom brought back 90s rock with windmill guitar strums and gritty vocals. The lightning flashing through the sky added to the image as well, though that was an unexpected addition to the show. Along with classic hits, the band played songs from their March 2018 release, including the Boston inspired track, "Roman Cars." The band took it back to the 90s for their final song, the angst-ridden track, "Fortune Teller."

As if by fate, the rain stopped and the clouds parted just as Bleachers began their set.

Despite the weather, a large crowd remained at the stage along with a sizable group sitting on the Soldiers and Sailors Monument hill. Bleachers began their set with contagious energy. Lead singer Jack Antonoff called for the event staff to "release Evan" from a white tent previously set up for the rain. The band pumped up the crowd, with Jack already on the floor, as stagehands (including WERS' Live Mix coordinator, Jim) freed their bandmate from his protective shelter. Antonoff then addressed the audience with, "this is one of those shows that's better because of the rain." He was right. With the uncertain weather, no one knew how the evening would go which made everyone more thankful to be there and, as Antonoff said, a night they would remember forever.

The charismatic Antonoff had a story for every song.

He informed the crowd that the track "I Miss Those Days" is better live because they can play it more authentically to the original recording before their label made changes. Antonoff also explained that the deep synth note at the beginning of "Rollercoaster" was the "dark and hopeful" sound that inspired him to form Bleachers in the first place. The band played a mellow cover of "Carry On" by Jack's former group, fun. This showcased the bands' differing styles. Antonoff then shared another cover "Just Can't Get Enough," by one of his own favorite bands, Depeche Mode. The band ended the night on the lovelorn dance track, "Don't Take The Money." Attendees sat on each other's shoulders reaching towards a clear, vibrant sky as the sun set on WERS' first festival, with Antonoff on the speakers reaching out to the crowd.