For an organization dedicated to dismantling structural racism through arts, culture, community organizing, and research, King Boston’s 2022 Embrace Ideas Festival delivered what they stand for.

When referring to monuments and the arts, Jeffries went on, “they are symbols that amplify the environment.”

Dr. April Khadijah Inniss, King Boston’s director of community-engaged research, presented the vision for a community well-being dashboard which is Black, Indigenous, and People of Color-centric. According to their website, it helps “frame, articulate, and advocate for policies that promote joy and well-being in Boston,” particularly for People of Color.

For the duration of the festival, King Boston organized social time from 4 p.m. to 6 p.m., during which artists performed each day except Friday.

The quartet has two albums, the second of which will be released soon. Both albums are part of the Negro Spiritual Songbook, which is, “a collection of original compositions that are inspired by the negro spirit,” according to Groover Jr.

“The whole idea was to replicate his movement in the ring,” said Groover Jr.

During “Rumble Young Man Rumble,” the ambiance was filled with a jab-like rhythm made by the sounds of the saxophone, the drums, the bass, and the piano. That afternoon, the quartet recreated how Ali navigated the boxing ring and navigated life the way Groover Jr. intended his musical piece to do.

“Anything I can do as a musician to shed light on their legacy,” said Groover Jr., when referring to MLK and Coretta Scott King as to why he participated in the Embrace Ideas Festival. 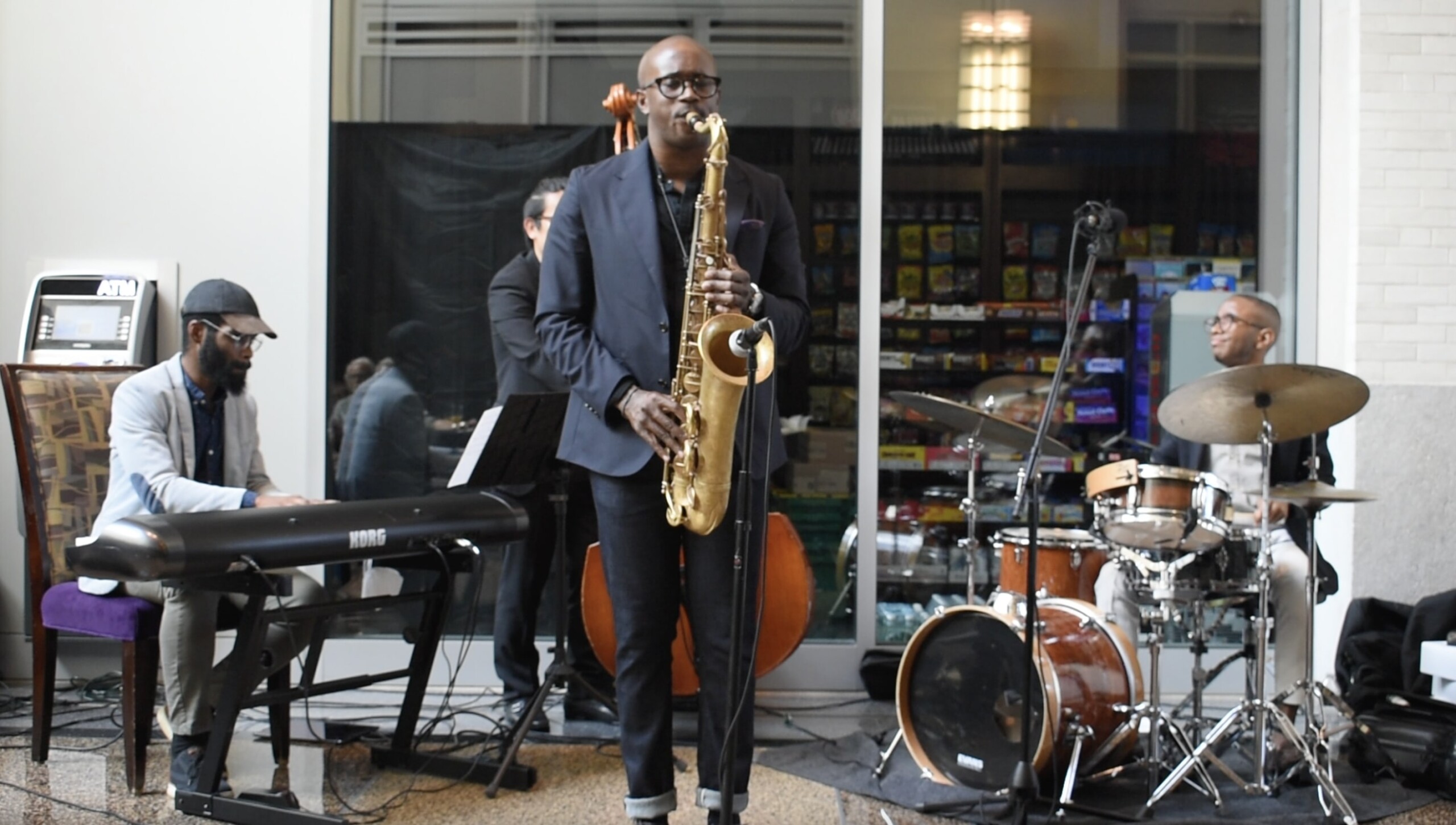 The Gregory Groover Jr. Jazz Quartet perform at day one of the Embrace Ideas Festival. Photo by Mina Rose Morales

The second day of the festival took place at the Harvard Medical School’s Joseph B. Martin Conference Center. There was a healer’s panel comprised of four Black women doctors— Dr. Thea James, from Boston Medical Center; Dr. Myechia Minter-Jordan, from Carequest; and Dr. Joan Reede, from Harvard Medical School. They discussed the topic of healing from racialized trauma.

“At this moment, at this particular time, I want to heal the healers,” said Vedrine before she began singing.

She sang the first verse of “Precious Lord Take My Hand” in Creole to honor her family’s Haitian heritage. She sang the next verse in English and then personalized the performance the way she does with many of the songs she shares at events. Vedrine added “help me lord” and invited the crowd to repeat after her. They did. 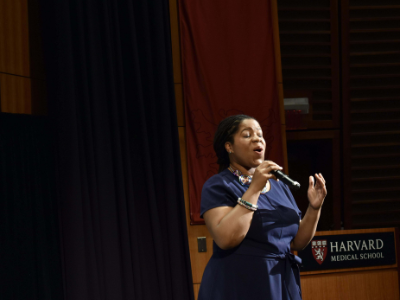 During social time, the singer Kaovanny, who is also one of King Boston’s artists-in residence, performed with the band Roots Alley Collective, a band dedicated to the cultural preservation of West Indian heritage. The two took the grounds on the Harvard Medical School Courtyard, playing several covers. 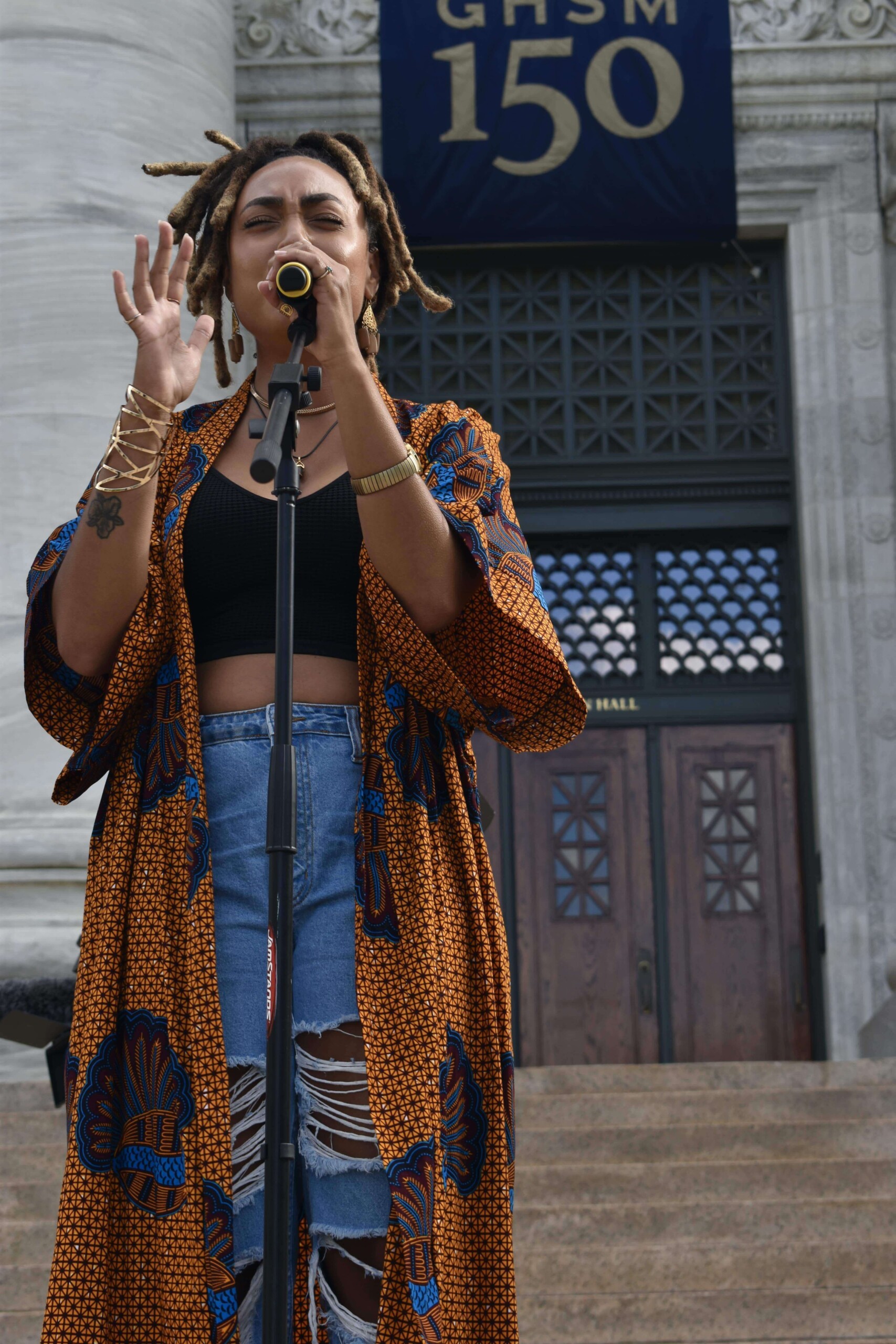 DAY 3: CULTURE CAN SAVE A CITY

On the third day, Gregory Ball, the director of digital strategy and production at King Boston, led a panel discussion with a few of Boston’s culture creators about the role culture plays in defining a city. The panelists included Andrés Holder, from Boston Children’s Chorus; Rob Gibbs, from Pro Blak; Michael Bobbitt, from Mass Cultural Council; and Sheena Collier, from Boston While Black.

As each panelist walked onto the stage, music was played, mainly hip pop, and each speaker danced to the rhythm of the music, except Ball who said he was too old. The first panelist, Holder, set the mood when he dance-walked to “I Can” by Nas.

“All problems in the world can be solved through arts and culture,” said Michael Bobbitt of Mass Cultural Council.

At Klaviyo, The Chocolate Factory band played. The band consists of RJ Walters on the keyboard, Christian Napoleon on the drums, Antonio Loomis and Miguel Diaz on the electric guitar, and Christoff Jamal Glaude on the bass. Tim Hall, the group’s saxophonist, couldn’t make the event.

The band played cover songs including “Human Nature” and “Rock with You” by Michael Jackson, “After the Rain” by Little Dragon and “People Make the World Go Round” by Stylistics. The band has original songs but did not play any.

“Though it is not our job as Black people to fight racism, we still take it on inadvertently by existing,” said Oompa, the group’s founder and manager.

She added, Black musicians continuing to demand for fair treatment at venues and sharing their stories in their songs are examples of how music helps fight racism. 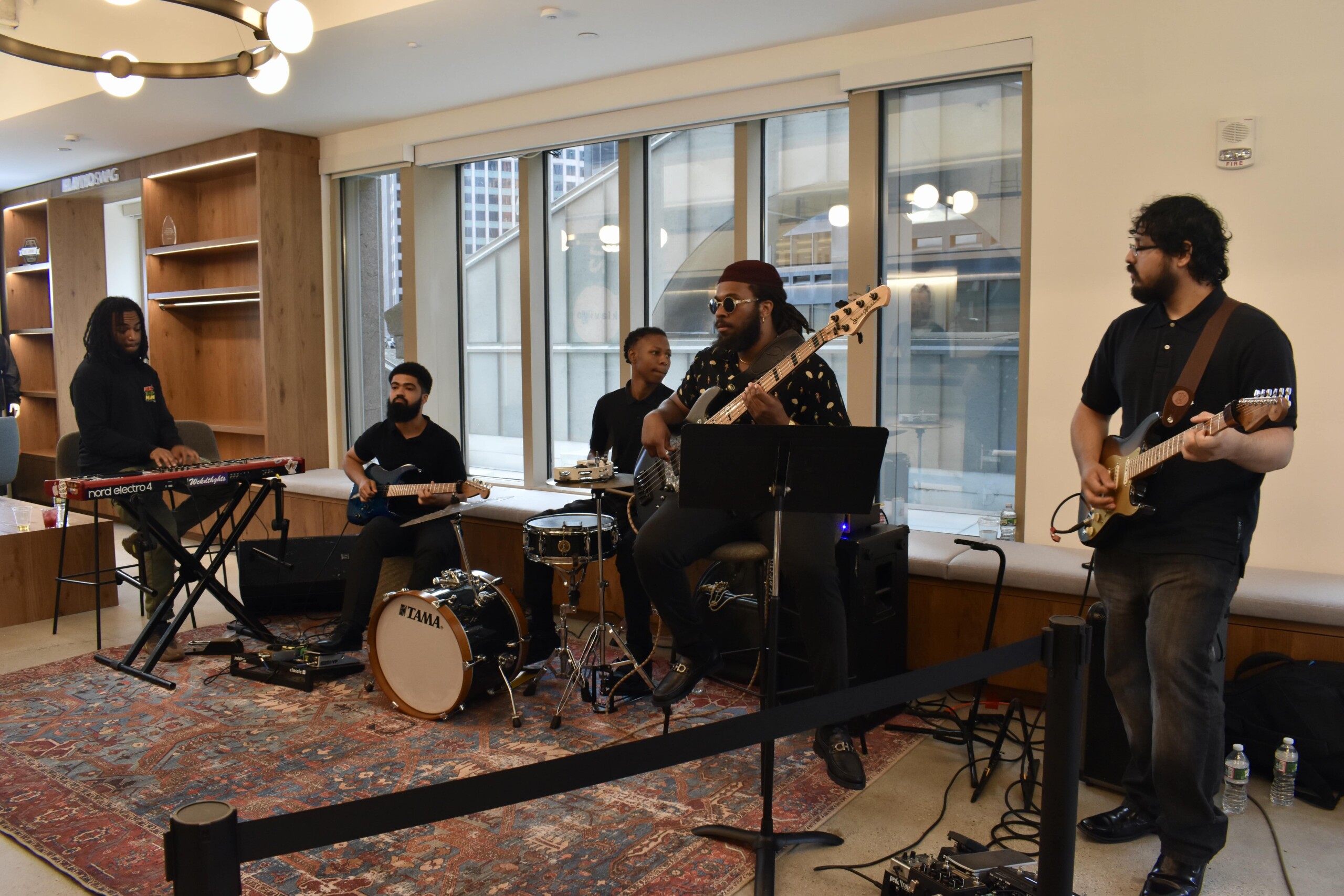 On Thursday, King Boston planned a day to discuss reparations in the Black community. There was a discussion about reparations across the country but particularly in Boston. For the panel discussion on readiness for city level reparations, the conversation was led by Dr. Jemadari Kamara, from the University of Massachusetts Boston; Sheryl Evans Davis, from the San Francisco Human Rights Commission; and Robin Rue Simmons, from First Repair.

Dr. Jemadari Kamara spoke about how countries in the Caribbean are using the arts to foster and raise consciousness about reparations. 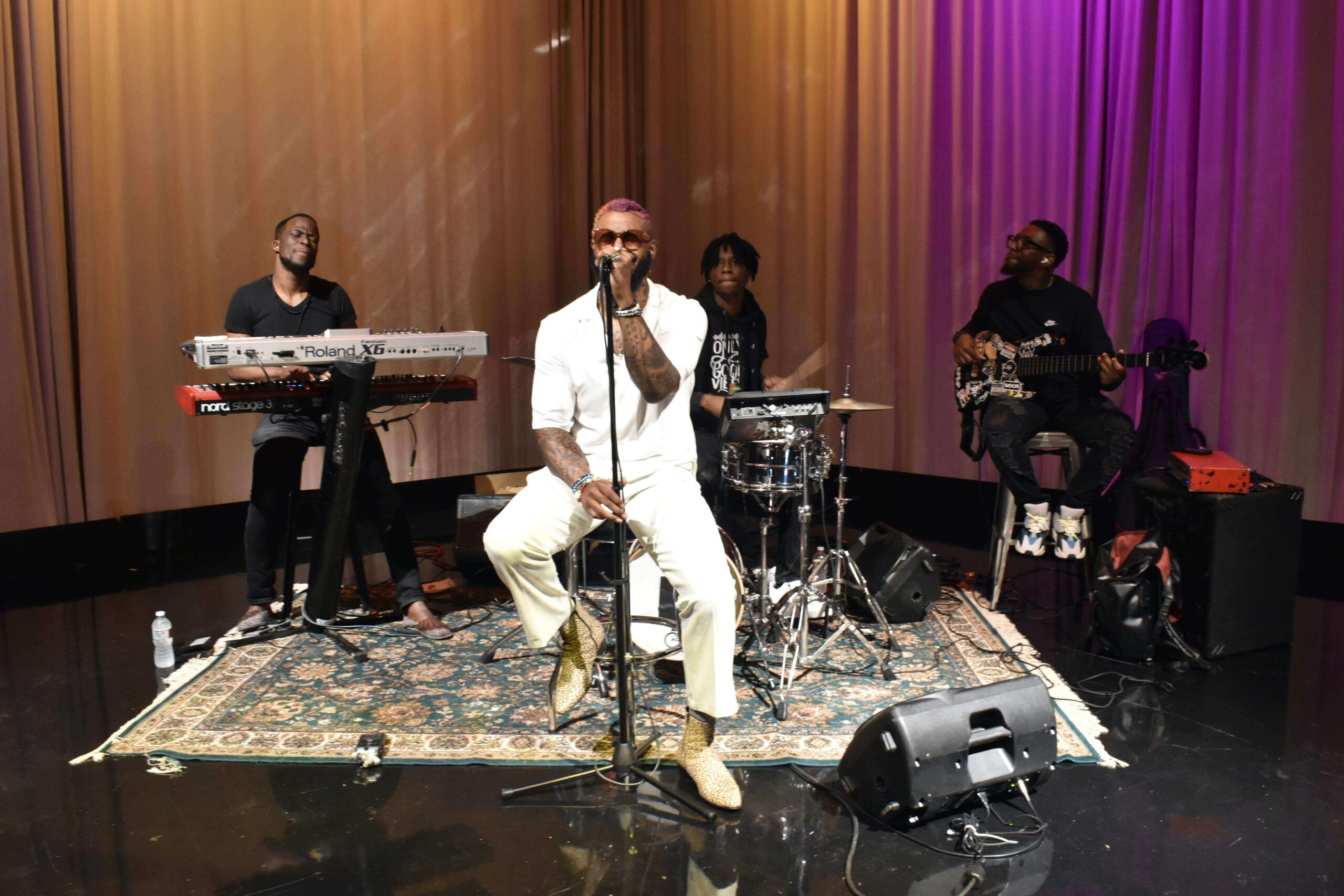 Real P was the DJ that night, bringing different artist to the stage such as Miranda Rae, an R&B artist who recently made the Boston Calling lineup; Notebook P, also an R&B artist; and ToriTori, an R&B-hip pop artist and vocal looper.

Real P stressed the importance of supporting Roxbury artists, which is why he brought local artists to the celebration.

As each song played, people danced passionately, most singing along to each song in celebration of the day. 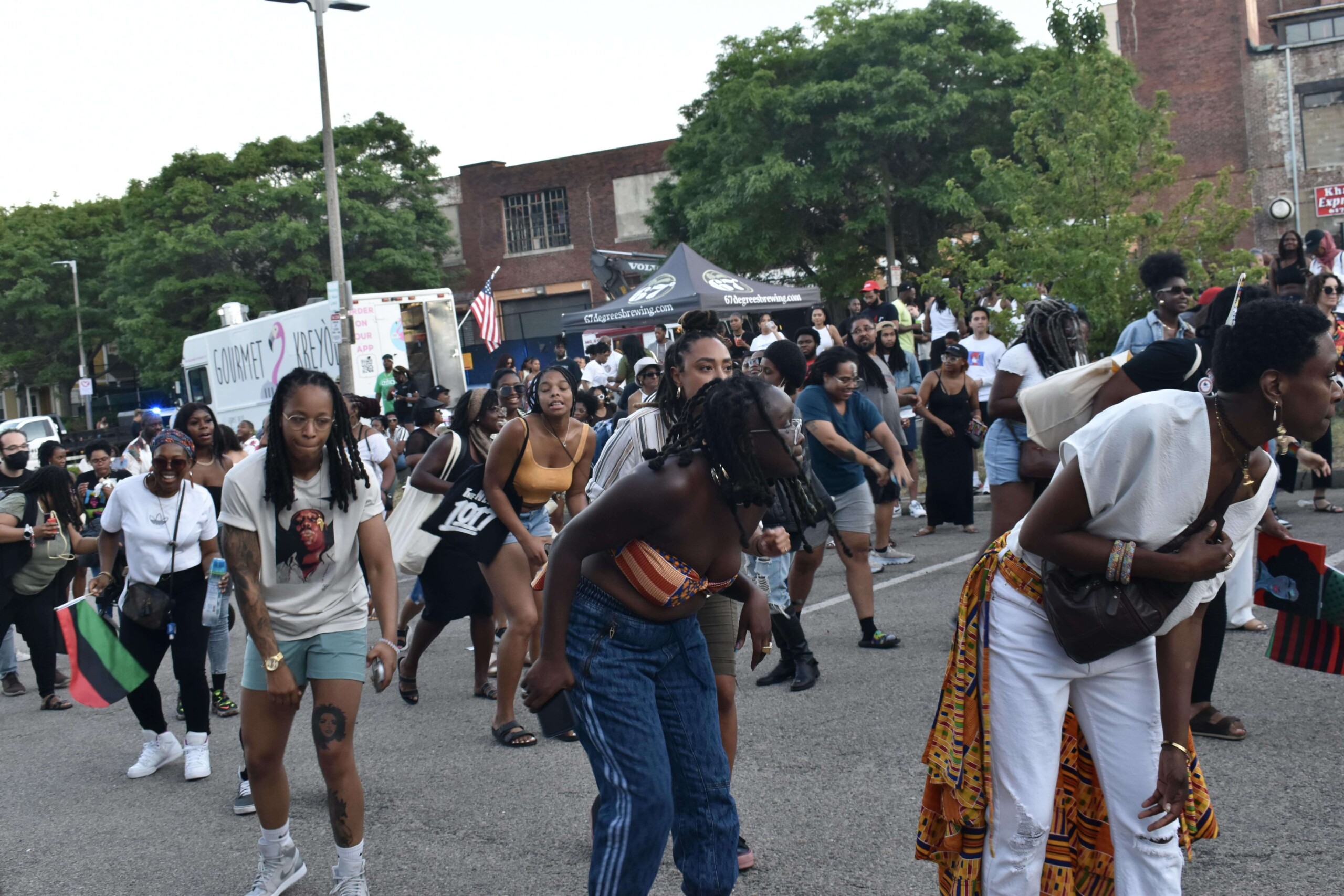 “It’s important because we get to celebrate ourselves as African-Americans,” said ToriTori when referring to the significance of Juneteenth.