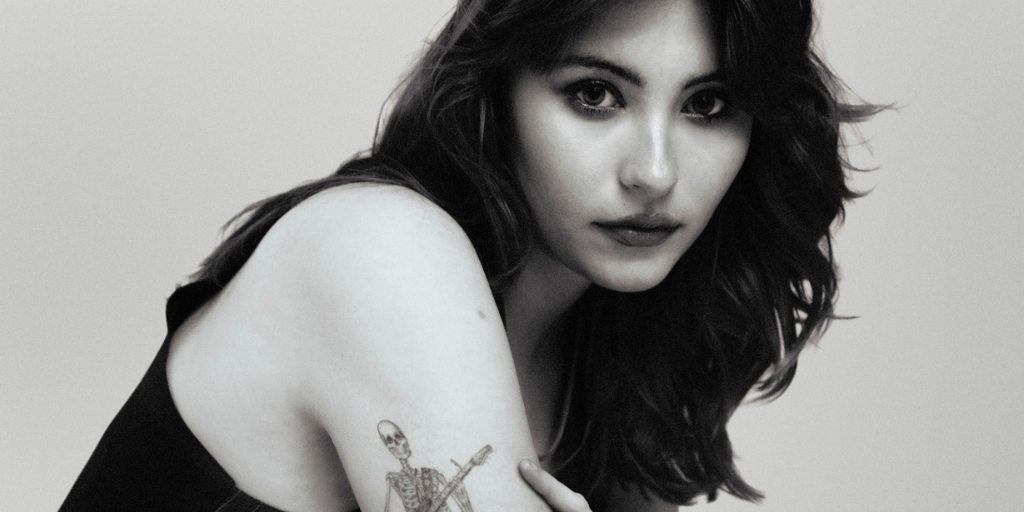 Allison Ponthier is forging her own space in the country music world. In 2017, Ponthier made a move to Brooklyn, New York after calling Texas her home for the first 20 years of her life. It was there that she had an artistic and personal breakthrough. The singer-songwriter released her debut EP in August 2021 and then a follow-up EP, Shaking Hands With Elvis, this summer.

Sitting down with staff writer Breanna Nesbeth, Ponthier reflects openly on these changes, the lessons that have come with them, and how media like West Side Story and Midsommar find their way into her creative vision.

HI ALLISON, THANK YOU SO MUCH FOR SPEAKING WITH ME. YOU JUST SHARED YOUR LATEST EP, SHAKING HANDS WITH ELVIS, WITH THE WORLD A FEW MONTHS AGO. HOW’VE YOU BEEN SINCE ITS RELEASE?

Allison Ponthier: I’ve been great! I think that releasing a body of work is always really overwhelming because you put [in] so much love and effort. But for me, releasing a project is incredible because I feel like people can understand me better every time I put a new one out.

YEAH, TOTALLY! DO YOU SORT OF BECOME ‘HANDS-OFF’ SEEING THAT “OKAY, NOW IT’S DONE, IT’S OUT,” OR ARE THINGS JUST RAMPING UP EVEN MORE NOW?

AP: Well, I think I think that part of the reason why I love this job so much is because there's always something to do at all times. Like if I'm not recording, I'm on tour. If I put something out, [I’m] immediately writing again.

But yeah, I mean, the project to me… I always wanted — whether it's an EP or an album or a music video — I always want everything to feel like it's being wrapped up with a bow and it's a complete project. But also, whenever I make a song, usually like a year later or a few months later, the meaning changes or becomes significant for me again in a different way.

THAT'S AWESOME TO HEAR! SPEAKING OF COMPLETING PROJECTS, WHEN IT COMES TO LIKE THE BRILLIANCE OF YOUR VISUAL EXPLORATION— WHETHER IN TERMS OF YOUR MUSIC VIDEOS OR YOUR MAKEUP— [IT SEEMS LIKE] A VITAL PART OF YOUR ARTISTRY IDENTITY. WHAT’S YOUR PROCESS FOR CURATING THESE LOOKS, THESE VISUALS?

So to me that was always musicals. [I] loved TV musicals like West Side Story or Little Shop of Horrors. And then that turned into a love of campy movies like Barbarella or Flash Gordon.

I am just crazy-– and so I compiled a huge list and a slideshow of all of the things I love from those movies. And [I] organized them together and found a through line. That's kind of like the guideline that all of my visuals run through.

AP: Oh, my favorite movie right now? I mean, I really love Midsommer. I keep coming back, so probably that.

IT'S SUCH A BEAUTIFUL MOVIE, OH MY GOSH! LIKE THE VISUALS OF THAT MOVIE DO SUCH A GREAT JOB OF TAKING AWAY FROM WHAT CRAZY THINGS ARE HAPPENING IN THE NARRATIVE.

AP: I'm crazy about it! I’ve watched it so many times. I've watched the extended edition and I've been ripped open like multiple times.

OKAY! BACK TO YOU— WHEN YOU LOOK BACK AT YOUR TRANSFORMATIVE MOVE FROM TEXAS TO NEW YORK CITY TODAY, IS THERE ANYTHING YOU WOULD’VE DONE DIFFERENTLY?

But everything takes time. Moving to New York was synonymous with my coming out story. And that, you can't rush. You have to take your time. So definitely.

DO YOU THINK YOU'VE ADJUSTED TO THE CITY OR IS EVERYDAY LIKE YOU'RE LEARNING SOMETHING NEW ABOUT CITY-LIVING?

AP: I love the city! What I love about it is I love being a stranger among a crowd. I love walking. I go on many hour-long walks every day. I just like being around other people and it's always changing. I love the energy of New York.

THAT’S GREAT TO HEAR! I WANT TO ASK, HOW MUCH HAVE YOU SEEN THE COUNTRY MUSIC SCENE TRANSFORM AND ADAPT TO CHANGING TIMES, ESPECIALLY REGARDING ACCEPTING QUEER ARTISTS IN THE COMMUNITY?

AP: It's so tangible how the queer community has adopted country music. Country music wasn't always as [it was when] we were surrounded by it in the early 2000s.

Some people, they think that country music is only for a certain group of people, or for a certain mindset. But now, I'm so glad to see that it's opened up.

One of my favorite songwriters and country artist of all time is Brandi Carlile, and I think she's a really amazing example of someone who honors the tradition of country music, but also at the same time, she's very outspoken about queer rights and and social justice issues in general. So I'm a giant fan of hers.

THAT’S GREAT! YOU HAVE A LIVELY ONLINE PRESENCE— YOU DO A GREAT JOB SHOWCASING YOUR ART ACROSS MANY DIFFERENT PLATFORMS. BUT, DOES IT EVER BECOME A BIT MUCH TO KEEP UP WITH WHAT EVERYONE IS SAYING ABOUT YOU ONLINE? I KNOW YOUR SONG, “HARSHEST CRITIC,” IS VERY INSIGHTFUL ON THIS SORT OF TOPIC.

AP: Yeah! I mean, I think that anyone who's online has, like, a complicated relationship with being online. And for me, I always wanted to keep that relationship healthy. So I never post stuff to just post.

I started being online as a teenager in Texas, wanting to find community and wanting to make things and share them with other people, when I was too scared to share them with the people around me. So I personally have had a very long relationship with social media.

And yeah, I mean, I'd never want to make it anything other than enjoying posting stuff. The minute it stops being fun is when I hope I can like step back and reconsider and learn how to make it fun again.

THAT'S AWESOME. YOU’VE BEEN VERY OPEN ABOUT YOUR MENTAL HEALTH AND DEALING WITH ANXIETY, AND NERVES— AND AS AN ARTIST, SO MANY TIMES YOU [ARE] PUT IN VERY NERVE-WRACKING SITUATIONS, LIKE PERFORMING. HOW DO YOU NAVIGATE THE TWO?

AP: I very much identify with being an anxious person. It's something that has plagued me my whole life and stopped me from doing a lot of things that other people were doing. Even like normal tasks. I’m not shy about it. I talk about my intense phobia of driving.

It's kind of like working out when people are like “If you work out one day, you're not going to be jacked right after. You work out for a year, you'll be surprised at how much change it is.” That's exactly how anxiety is. You have to scare yourself a teeny tiny bit every day, and then in a year you'll realize that you've overcome so many anxieties.

Like me, with touring. I've played for like, I don't know, 100 people max. And that was terrifying. And when I went on tour with Lord Huron, I told myself “Alright, I just got to get through tonight,” and we played for like 5,000 people a night. So that was really a great feeling, to prove myself wrong.

DO YOU EVER RECOGNIZE THAT IN THE MOMENT, AS YOU TACKLE YOUR ANXIETY, OR DOES IT TAKE TIME? [LIKE] YOU LOOK BACK AND YOU'RE LIKE, “WOW, I CAN'T BELIEVE I DID THAT!”

AP: So the first show I did, my first big show I did, was in Philly with Lord Huron, and I was like, ‘Look, it's 30 minutes. I can get through 30 minutes.’ I was so terrified.

And halfway through doing the show, I realized that I was going to be okay. It was like a moment in the show where I was like, ‘I will survive this and maybe even do alright, maybe even come out the other side proud of myself.’ And I remember that vividly. And I'll never forget it for the rest of my life. Because after the show, I was so happy and I was so excited that I proved myself wrong. There's no other way to say it other than I proved myself wrong. And I'm so happy that I did.

THAT'S AWESOME. DO YOU HAVE ANY IDEA WHEN YOU ARE HITTING THE ROAD NEXT AND DO YOU FEEL PREPARED TO?

AP: I don't have anything officially on the books, but I am wanting to go out again in the Fall. That being said, now that I have experienced touring… I was the person that was most scared of touring. I thought I was like keeping a giant secret from everyone I worked with by being hurt by it. And now I can't wait to go out again.

OKAY! AND SO THE LAST QUESTION I HAVE FOR YOU IS: IS THERE ANYTHING YOU'RE CREATING OUTSIDE OF MUSIC, LIKE JUST CRAFTING ANYTHING FOR PERSONAL FULFILLMENT OR [AS SOMETHING] YOU WANT TO SHARE WITH THE WORLD?

AP: Sure! So I make sculptures. I make little sculptures of little monsters. It’s so cool!

WOW! IS THAT SOMETHING YOU RECENTLY STARTED?

AP: ​​Well, I'm traveling right now, so I don't have them with me. But I found a little model car, like the ones they have at gas stations. I took one home and I sculpted a bunch of alien tentacles coming out of the car. I love anything sci-fi. So most of my sculptures are like aliens and spaceships. So that's probably my biggest hobby outside of music right now.