Kristian Matsson may as well have actually been the tallest man on Earth; his presence took up so much of the room that audience couldn't take their eyes off of him for his entire solo performance.

As soon as Matsson bounced onstage - and he did physically bounce onstage - his audience was engrossed in his every movement. He commanded every portion of the theatrical stage within seconds of prancing on. Every movement he made felt carefree and honest, full of energy, almost rhythmic, but not at all planned out. He danced and sang as if no one was watching - this made it all the more captivating to experience first hand.

The best part? He did all of this without a voice.

A stagehand placed a mug onstage before the show even started. This was an immediate red flag; as a performer, if you're drinking anything from a mug onstage, it generally means that the audience should be prepared for a half-hearted, pitchy performance. Ironically, this was not nearly the case with Matsson. Although not on his A-game vocally - as you could hear from the strained high notes and occasional profanities he would giggle under his breath after them - he had enough charisma and stage presence to fill an arena.

"I knew tonight would be fun when I woke up this morning and couldn't talk," he joked at the beginning of the show, adding that he'd buy anyone a drink who didn't think his performance was any good.

"Let me know if you're not enjoying this and I'll buy you a drink afterwards,"

It didn't seem like a formal concert as much as a performance in front of a group of friends.

As a one-man act, it takes a lot of talent to command an audience the way Matsson was able to. He stopped to address the audience in what seemed to be a conversation between friends after the performance of his first two songs, . This casualness also followed into his performance of songs: five seconds into his third song I Won't Be Found, he stopped, restarting with a quick "wait, hang on," and a change of key. Doing this in any usual instance may be seen as unprofessional, but the audience just laughed and cheered with him.

"I forgot Boston is very polite," he commented at one point, referencing the loud applause after a less-than-perfect performance of Forever Is A Very Long Time.

Overall, Matsson's charisma and charm came through throughout the entire show, leaving the audience at his mercy.

Matsson made a point to continue jokes and laughs throughout the show. He engages with every member of the audience in a way I've never seen in a concert setting before. Being a one-man act demands that kind of charismatic personality, and Matsson completely nailed it. The Tallest Man on Earth certainly knew how to entertain; voiceless or not, his performance was intoxicating to watch, listen to, and enjoy. 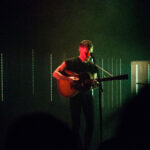 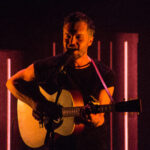 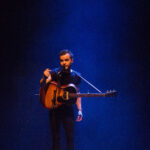 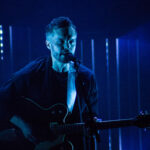 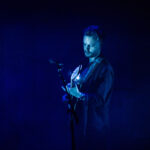 Who to Watch: Man Man