As you walked into Oberon on January 25th, the energy that radiated in the room was hard to ignore. Right from the start, guests were immersed into an interesting and unique experience as interactive dancers started communicating with them. Audience members mingled around and watched the robotic masked performers walk around and immerse them into the "iTMRW" experience. "iTMRW" is Arc Iris' newest innovation, combining a theatrical performance with live music from their newest album.

As the lights fell, performers Jocie Adams, Zach Tenorio-Miller, and Ray Belli snuck out to the stage.

The audience's gaze fell on a screen above the stage, where a man with blue hair introduced himself in a video experience. This man, known as Lucian Greg (played by Noah Harley), is the face of the immersive universe "iTMRW." The crowd is taken from the year 2020 all the way to 2080, a futuristic world where the creation of humans is the norm.

This queued Arc Iris into their first song as the lights came on and the crowd was hit with Adams' beautiful voice.

Dancers explored the crowd, making their way to the stage by following the rhythm that Belli was making on the drums. It was established early on that Arc Iris wasn't just putting on a concert, but a whole show. They used their music to tell a story-a love story, to be specific-about a boy (Robert) who falls in love with an android girl (Jenny). As the story advanced, the production got bigger and better.

"If you can dream it, you can do it," said Lucian Greg as the show pushed forward and the audience was introduced to the two main characters.

With a story comes a message.

To me, Arc Iris had something important to say with this performance. They could have just performed their songs like any other band, but they chose to give their audience a wake-up call. The story depicts a distant future where cities float on islands of trash, females can be bought and forgotten, aristocrats live in despair, and one mega-corporation rules the world. However, despite such a dark backdrop, the show still depicted a wonderful view of the beauty of love within life.

The most interesting part of the concert for me was that Arc Iris was able to accomplish such a clear thesis with their music and their performance. I never knew what was coming next, as I was surprised at the beginning of every song. Yet, I had no trouble following the story and was completely immersed the whole time. One of my favorite aspects of the show was the inclusion of Lucian Greg, as he guided the story in such an eerie way. I also really enjoyed the production. The colors were so attractive to the eye, and the costumes the dancers wore were great. Their looks mannerisms really took me to the future.

Overall, Arc Iris gave their audience a wonderful piece of art in the form of a fantastic show. With an underlying meaning and an entertaining subject, Arc Iris was able to accomplish not only an entertaining show, but one that has meaning. 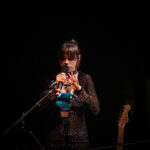 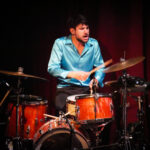 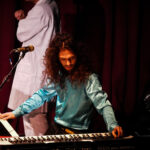 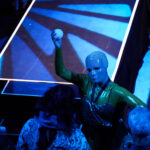 Interview: A Look Into the Universe of Arc Iris with Jocie Adams