Stepping into Great Scott is like a grown-up version of stepping into your friend's Allston basement show. Brick walls and checkerboard floors frame a modest stage. It's cozy and intimate- the kind of place where you run into the main act in the bathroom before the show. On Friday night, the low-key venue was a perfect haven from the thunderstorms.

Eclectic local duo Mattie and Debbie opened as the bar crowd filtered over to the stage.

After the band came to the end of their set they hyped the night's headliner, Oh Pep!

After a brief intermission, the Australian indie pop group took the stage. The band opened with "Asking For," a hopeful love song with swelling instrumentals.

The four-piece group is fronted by founding members Olivia Hally and Pepita Emmerichs. The pair met in secondary school and their long-standing rapport is apparent. The two bantered with each other about their severe lack of sleep. Hally remarked, "I just drank a can of coke which is a big deal for me." The audience laughed along with them, obviously enamored with the charming musicians.

The self-purported theme of the night was "emotion and turmoil."

This sentiment was half true. While the band was lighthearted and funny, the music was deeply personal. The lyrics are complex and honest. Emmerichs swapped seamlessly between fiddle and mandolin, the instruments' bittersweet melodies vital to the sound of Oh Pep! While lead singer Hally's vocals were gorgeously raw on their own, the duo's strongest moments were when the two harmonized. The tone of their voices was wonderfully compatible.

Despite having just released the album I Wasn't Only Thinking About You… the band already had a new, unreleased song to share with the crowd, an indignant jam called, "Enlightenment."

The band ended their set on the WERS favorite pop track, "What's The Deal With David?"

Hally and Emmerichs returned without their band for an encore. They chose the melancholy tune, "There Would Be A Riot" to end the night. As the pair finished, a voice from the crowd cried out, "Boston loves you!" The musicians laughed, stepping down into the crowd to greet their fans. 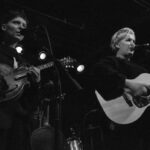 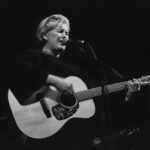 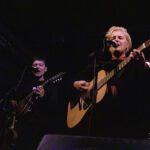 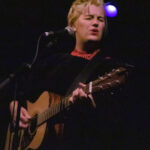 First Aid Kit Brings Soul into the Hearts at House of Blues
Weekly News: Bostonians Respond to the 2016 Presidential Election