Playing and selling out his first headline show in Boston, Nairobi folk singer, J.S. Ondara, is making his presence known within the folk music genre.

Showcasing his debut album, Tales of America, released just last month, Ondara's talent for combining storytelling and beautiful guitar chords underscores how justifiable it is that Ondara completely sold out the red room at Cafe 939 at Berklee. Though Cafe 939 is one of the more smaller music venues in Boston with its 200 people capacity, Ondara's set brought a newfound sense of intimacy that resonated with each and every crowd member in the room.

Prior to the start of his set, Ondara promised the crowd an entire live rendition of every song off his new album.

Thus naturally, he opened the show with his first song off of the album "American Dream." Instantaneously "American Dream" caused the entire crowd to be silenced and fully entranced with the track's rich elements of blues and soul. Whilst having his eyes closed the entire song, Ondara's powerful and steady vocals emitted a sense of ferocity whilst repeating the chorus "It was just an American Dream."

Ironically,"American Dream" served as only a precursor song for the amount of impressive vibrato ranges that were to come for the rest of the set.

Songs like "Good Question" and "Lebanon" were evident crowd favorites with both songs containing uplifting soft and soulful melodies that told the tale of falling in love and going the extra mile to be as present as possible in one's significant other's life. In "Good Question" Ondara's soothing vocals encapsulated the repetitive chorus of "come baby love me now/love me like you never will again" that made one feel like they had butterflies fluttering in their stomach. Whilst, in "Lebanon" one of Ondara's blues heavy tracks, the sweet chorus of  "I'll go wherever you go" caused the crowd to sway and dance to the rhythm of what felt like a comforting, acoustic, campfire song.

Ondara's set was also composed of more stripped down slow melodies such as the beautiful love song "Give Me A Moment."

Ondara's slow and velvety vocals in "give me a moment so I can give you a moment" felt like the audience was being vocally caressed. Until Ondara's vocals would ease into a potent and passionate high note seen in the last bridge of  "break my heart, go on tear it apart." The consistent usage of Ondara meshing together his soft whispery vocals in contrast to his fiery and intense high notes is what makes his octave and vibrato range so eye opening to every listener in the audience.

The crowd gave Ondara their complete undivided attention and evident enthusiasm towards every song he would deliver.

This caused Ondara to joke about how the level of intimacy between the crowd and him made him feel like he was back home at his Grandma's living room where his cousins would gather and share stories, except now his cousins were white. Ondara also referenced his childhood to the audience on how even when he barely knew how to speak English as a child he would make up his own words and sing his poems in the form of a cappella. This lead into the one a cappella track Ondara played for the night, "Turkish Bandana," showcasing Ondara's evident songwriting inspiration from Bob Dylan and how much of a role his childhood in Nairobi had into shaping him into the folk singer that he is today.

Impressively, Ondara's live show was able to bring a diversified crowd made up of children, college students, and adults to feel spiritually connected to his music.

In essence, Ondara's vocals have the effect of making one feel like either they're hearing him through a one on one bedtime story or they're listening to him in a wide spaced theater auditorium. Thus no matter the setting, Ondara's overt talent in songwriting holds the power to creep it's way in the nooks and crannies of each attendee's heart and remind one of why life is precious and beautiful. 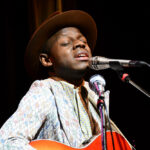 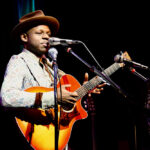 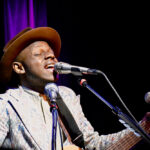 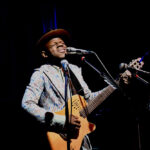 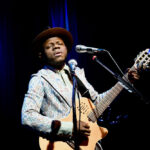 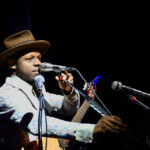