CHVRCHES’ Ends Their Tour at Orpheum by Breaking the Mic Stand

Sunday night at the Orpheum Theatre marked CHVRCHES' second night in Boston and their final show on the Love Is Dead tour.

L.A. based indie group Lo Moon began the evening with a slow ambient build before breaking into a set of synth rich melodies and unearthly vocals. Lead singer Matt Lowell warmed up the audience with some baseball banter and lamented the end of their time on the road.

A stark contrast to Lo Moon's composed introduction, intense white strobe lights indicated the arrival of CHVRCHES. The Glasgow native trio emerged from the pulsing fog to tremendous applause and jumped straight into "Get Out." The lively track is indicative of the band's May release which celebrates the glittery indie pop sounds of heartache.

Front-woman Lauren Mayberry was a five foot force, bounding across the stage in hot pink face paint and a tutu.

During instrumental breaks she would step back from the mic and spin with arms outstretched, reveling in the vitality of her music. Between songs, Mayberry addressed the crowd. She commended Boston's abundance of potent craft beers; quipping, "This is Boston, you can handle your beer, not me." She claimed they were all slightly a bit hungover from a fun night after their first show in Boston on Saturday, but it wasn't a hungover show by any means.

He sang a couple of his lead tracks, "God's Plan" and "Under the Tide." As a producer in addition to a musician in the group, Doherty was deeply in touch with the beat. Between verses, he was consumed by the instrumentals, dancing like no one was watching.

Mayberry returned for the fervent track "Science/Visions." As light panels flashed and the band threw their bodies around to the music, it felt like being in a neon fever dream. When the track came to a close, Mayberry held up a piece of metal for the crowd to see. "I broke the mic stand you guys."

The band returned for a two track encore and Mayberry concluded the night with "Never Say Die," a righteous song with a rapidly paced synth hook. The repeating lyrics were perfect for a cathartic call and response. If every night on tour was as exuberant as this show, we hope Chvrches enjoys their well deserved break from touring. 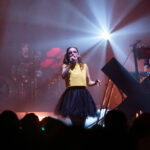 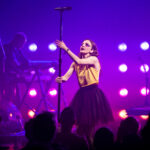 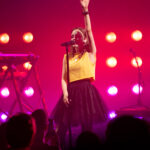 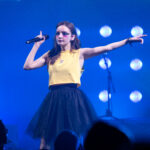 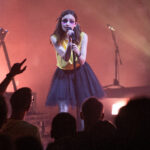 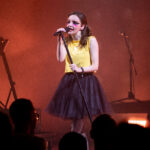 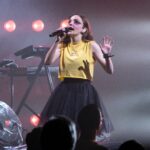 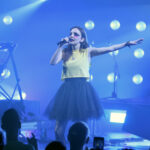 Metric at Orpheum
Weekly News: Where Do Democrats Stand After DNC