As the sun set over Boston Calling Saturday evening, thousands of fans packed in front of the Blue Stage for one of the most anticipated acts of the weekend. The 1975 returned to New England for the first time in over a year, still riding a massive wave of success off of their sophomore album, I Like it When You Sleep for You are so Beautiful Yet so Unaware of it. This was the band’s second time performing at the festival since its inception. They shared the stage with the likes of Twenty One Pilots and Lorde in the fall of 2014. 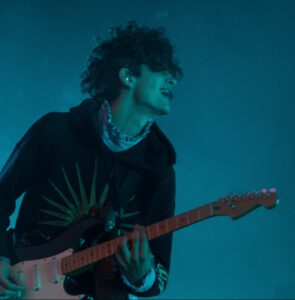 Matthew Healy of The 1975 at Boston Calling – Bethany Owens

Minutes before the performance began,

a warm hum played through the house speakers that could be felt hundreds of feet away from the stage. In an explosion of light and sound, The 1975 burst onto the stage with the song “Love Me.” The band has fully embraced a look and sound that feels straight out of the 1980s new wave movement, combining groovy bass lines and drums with disco-era guitars and synthesizers that the crowd just couldn’t help but dance to.

One of the most impressive light shows of the entire festival.

The aesthetic of their lighting alternated throughout the set to match the feeling of any given song. During tracks off their self-titled titled record, the band members were silhouetted in black and white while strobe lights lit up the crowd, reflecting the more rock influenced the sound of their older work. The stage brightened up during the band’s more recent songs, as their backdrop shined in pink and white with the more alternative and new-wave influenced music.

The 1975 played a thorough mix of favorites off both albums, but one of the most memorable moments of the entire weekend was their performance of “Facedown,” a b-side off the deluxe version of their self-titled debut. As they’ve done previously, The 1975 kept the focus on the music, and rarely broke to speak to the crowd. There was no encore for the Boston Calling crowd, but fans were treated to a phenomenal performance of the band’s most recent hit “The Sound,” that certainly left everyone begging for the set to continue. But, as great performers have said, “always leave them wanting more.”