Following a fantastic first night, day two of Boston Calling continued the exciting weekend of music with an equally impressive mix of world class artists. Despite heavy rain the night before, festival goers were eager to get back to the Harvard Athletic Complex, with some fans getting in line as early as 7 am. 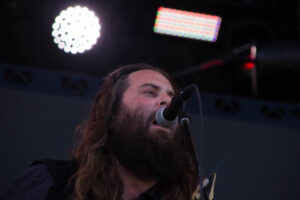 It’s no surprise that fans wanted to beat the lines. With artists like Tegan and Sara, The 1975, and Brandi Carlisle performing throughout the day, there were plenty of sets that were well worth the wait to be in the front row for. Singer and producer Timothy Showalter started off our day with his vibrant rock project Strand of Oaks. Riding a wave of success following the release of Strand of Oak’s fifth album Hard Love, the Indiana-based group’s energy picked up right where last night’s acts left off. Soaring guitar tone and heartfelt lyrics prepared the festival early birds for a day packed wall to wall with mind blowing performances.

As more fans filled the festival grounds, they made their way to Brandi Carlile’s set. The folk singer/songwriter, accompanied by her bandmates Chris and Tim Hanseroth, captivated the crowd with beautiful three-part harmonies. Carlile paid tribute to one of her greatest inspirations during her set by covering the legendary Fleetwood Mac. While her performance didn’t have the high energy light show or driving bass that other high-drawing acts did, thousands of fans found themselves peacefully lost in the uplifting twang of Carlile’s acoustic guitar. She didn’t even let the fact that her hometown Seattle Mariners were squaring off against the Boston Red Sox get in the way of connecting with the crowd, sporting a Sox cap for a song or two. 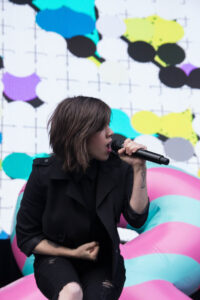 Sara of Tegan and Sara at Boston Calling – Bethany Owens

As Carlile wrapped up her set with a lengthy but awe-inspiring finish, Alberta’s Tegan and Sara took the stage. The veteran duo of identical twins proved what half a lifetime of playing music together can accomplish, getting thousands of screaming Boston Calling fans off their feet with hits like “Closer” and “Back In Your Head.” Despite the mud front caused by Friday’s rain, fans danced in the sun to the synth driven indie pop. The sisters had fun with the Boston Calling crowd, joking about how after years of not applying themselves, they finally made it to Harvard. 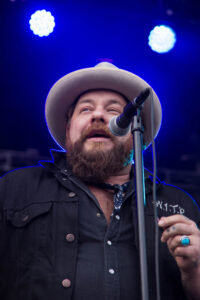 Next to take the stage was Denver’s Nathaniel Rateliff and The Night Sweats. The blues-rock band had been one of the most anticipated acts of the weekend, and they certainly lived up to expectations. Rateliff fed off the energetic crowd and delivered an impressive combination of moving gospel melodies and true southern grit. Fans danced along to hit songs like “I Need Never Get Old” and “S.O.B.” The touch of organ music backing brought the hearts of everyone in attendance from a hot football field in Boston into the echoing walls of a chorus hall.

Matthew Healy of The 1975 at Boston Calling – Bethany Owens

Fans sprinted across the festival grounds to the turf field where the the U.K.’s The 1975 set was just getting under way. The Boston Calling stage filled with fog as the sun set, and a warm hum suddenly vibrated throughout the enormous crowd of fans. The 1975 brought their unique blend of modern indie pop and 1980’s new wave-influenced rock to the mass of ecstatic festival goers. That same warm hum that started the set continued to vibrate with the grooving bass lines and entrancing synths. The four piece band played a good mix of old and new song off their debut self-titled album and 2016’s I Like It When You Sleep, For You Are So Beautiful Yet So Unaware Of It. They changed their backlights throughout the set to reflect the black/white or pink/white that defined each record respectively. A highlight of their set was a surprise performance of b-side track “Facedown.”

There was time for one more stellar act before the night ended, and London’s Mumford and Sons rose to the challenge of closing out an unparalleled day of live music. Naturally, they delivered in jaw-dropping fashion. The crowd was by far the largest we have ever seen at ay show in Boston. Fans stretched hundreds of feet back from the stage, but no matter how for away fans were, all eyes were locked on Marcus Mumford and his band’s heartfelt and passionate folk ballads. While you always expect artists to deliver on their hit songs in a live performance, Mumford and Sons brought a unique sound to their crowd favorite “Little Lion Man.” Bassist Ted Dwane picked up the double bass and brought a beautifully smooth and swaying low to the song. During the song’s bridge, the band entirely cut out, and the tens of thousands of fans in attendance joined together in the popular anthem.

Just when we thought day one was unmatchably amazing, day two brought our Boston Calling experience to a whole new level and showcased the growth that the festival has gone through in recent years. On Sunday we are looking forward to a fantastic cap to the festival, featuring the likes of Weezer, Cage The Elephant, and others.