37 years after its release, “Running Up That Hill (A Deal With God)” from Kate Bush is receiving the attention it fully deserves.

We have the popular Netflix series Stranger Things to thank for the resurgence of this song.

Nora Felder, the music supervisor of Stranger Things, was who first reached out to Bush about using “Running Up That Hill.” Bush reportedly agreed because she's a fan of the show.

After “Running Up That Hill" was featured in a critical part of the plot in the first volume of season four, people have flocked to listen to the track.

Because of Stranger Things, “Running Up That Hill” has found itself on top charts in Britain and the US with streaming numbers that would make the average person’s eyes boggle.

Bush has since commented on the attention the song has received.

She wrote, “I want to thank [the Duffer Brothers (the creators of Stranger Things)] so much for bringing the song into so many people’s lives… I have to admit I feel really moved by it all.”

As an artist who has hidden from the spotlight, this message proves just how wild the streaming phenomenon around this song is.

THE BACKSTORY OF “RUNNING UP THAT HILL” AND HOUNDS OF LOVE

After her fourth album The Dreaming didn’t perform as expected, Bush went to work on what would become 1985’s Hounds of Love. She produced the entire album by herself in her home studio using the Fairlight CMI, a new synthesizer that she managed to learn expertly.

“Running Up That Hill” is inspired by a gender-swapping. Bush imagines a man and a woman switching lives for a day and what sort of reaction and empathy that would create between them.

She first wanted to call the song “A Deal with God,” but her label persuaded her to change the title, claiming that religious countries may not play it with the original title.

WHAT’S NEXT FOR KATE BUSH?

She’s already broken quite a few records with this song. These include Bush becoming the oldest female artist to score a no. 1 hit and the longest time a song has taken to reach no. 1 on the charts. But there may be more in store if fans continue to listen.

While Bush doesn’t do much press or live performances, I think we can only expect more love for Kate Bush from the attention garnered by “Running Up That Hill.” As more and more young people discover her discography, her genius and contributions to music will be recognized even further.

Volume two of Stranger Things comes out on July 1st, so we’ll have to wait and see if the song will continue to play a role in more of the upcoming episodes.

It’s noteworthy that this particular Pick of the Week marks the first one that Music Coordinator Tatum Jenkins has written in the 78-plus weeks that she has been working at WERS. In a statement put out alongside the article, Jenkins explained the decision to break her infamous streak, writing, “It’s worth it for Ms. Kate Bush.” 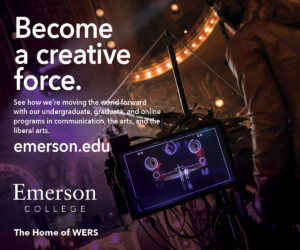