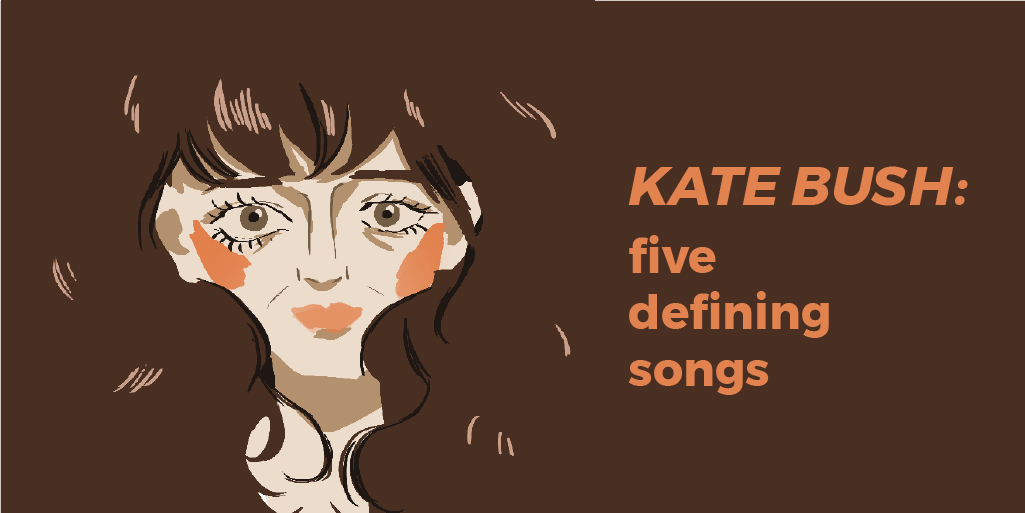 Kate Bush is perhaps one of the most prolific artists of our times. Born in 1958 in England, Bush was the member of a musical family, and taught herself piano at the age of 11. At 17, she caught the attention of record label EMI, who signed her shortly after. With a career spanning over forty years and ten albums, Bush is known for her incredible songwriting, iconic vocals, and experimental production techniques that have influenced countless artists. Here are five songs that showcase the singer at her best.

"Wuthering Heights" was Bush's debut single, and kicked off her career in a big way. Bush wrote "Wuthering Heights" when she was only 18, inspired by Emily Brontë's novel of the same name. Lyrically, Bush takes the place of the novel's character Catherine Earnshaw, as her spirit arrives at her former love Heathcliff's window. The song topped the UK Singles chart for 4 weeks in 1978, and remains as one of her signature songs. Bush's vocals hit impossible highs as the theatrical instrumentation matches the emotional intensity of the song's source material. "Wuthering Heights" is a blueprint for which much of Bush's career would build off of later.

From her 1980 album Never For Ever, "Babooshka" was another hit for Bush in the UK. The track showcases Bush's talent for storytelling within her music, crafting a story of infidelity and secret identities in the span of only three minutes. The song begins relatively quietly before launching the listener into its incredible chorus. Bush hits her signature high notes and the melody becoming infectiously catchy. "Babooshka" is Bush at her best, with lyrics and instrumentation pairing together perfectly.

"Running Up That Hill (A Deal With God)"

There are ballads - and then there is "Running Up That Hill". From her classic 1985 record Hounds of Love, "Running Up That Hill" is not only one of the best songs in Bush's illustrious career, but arguably one of the best songs of the 1980's. Lyrically, Bush sings about her lover, wishing to swap places with them in order to understand their feelings. The song highlights Bush's career as a songwriter and producer, as it is experimental yet filled with emotion.

Also from Hounds of Love comes another impeccable example of Bush's songwriting and production talents. Bush employs her storytelling abilities as she sings about psychologist Wilhelm Reich and his relationship with his son. The song blends orchestral strings with new-wave synths and drum machines to create a thundering, theatrical ballad that is unlike anything else. "Cloudbusting" is a favorite amongst Bush's fans, and has been covered by everyone from indie rock band Wild Nothing, to R&B singer Solange.

With Bush's voice solo alongside the piano, "This Woman's Work" is unlike any of the other songs previously mentioned. Singing about crisis during childbirth, Bush constructs one of the most emotional songs in her career, being an overwhelming ballad that forces its listener to truly feel Bush's lyrics. As the song progresses towards the end, Bush's vocals layer together into a chorus, and strings are introduced before reaching the song's cathartic conclusion. From her 1988 record The Sensual World, the song was featured in John Hughes' 1988 film She's Having a Baby, and had a second life through a cover by Maxwell in 1997.

Today, Bush still remains active as an artist, performing for the first time in decades in 2014, and publishing a book of lyrics entitled How to Be Invisible in 2018. Her music still inspires artists to this day, with people like Lorde, Florence and the Machine, and Outkast member Big Boi all listing Bush as an influence on their work.

Five Artists to Check Out On Snow Days