It's 9:30pm on a Tuesday night at the historic House of Blues. To my right is a 20-something pop-punk couple, and to my left a large, middle-aged, bald man staring blankly at the empty stage and clutching an IPA. With a good portion of the crowd being run-over from psychedelic rock band Zoé's space-inspired set, an eclectic mix of attendees came out to see Metric perform their newest album, Art of Doubt.

Back-lit by shimmering, rainbow LED lights, Metric kicked off with the fun and charged "Love you Back."

Red light flooded the stage as they transitioned into grittier, more guitar heavy "Youth Without Youth," Haines' vocals sharp and electric as ever. Playing mostly from Art of Doubt, sprinkled with hits from their seven-album repertoire, they packed both old and new songs with equal passion and energy. Perhaps the most memorable came early in the lineup with "Breathing Underwater," off of Synthetica.

Haines stopped belting the joyful anthem before the final chorus and took a moment to address the crowd. She mulled over the lyric "Is this my life?" and how it lent itself to empowerment, and overcoming adversity, or alternatively, sometimes she sang it and felt like she was drowning. Metric slowed down for the final bit of the song, Haines tackling a softer, but gut-wrenching version of the chorus geared towards the latter meaning.

The show maintained that intensity and reignited the momentum by then slipping into the title track off Art of Doubt.

As the stage drenched in purple light, shifted into more synth-appropriate pulsing LEDs for "Cascades," Haines never dipped in energy or faltered in her ability to command the stage. She's a seasoned performer and it shows. Captivating and powerful in a leather jacket and studded bra, her almost ethereal vocals either lend an enthralling dissonance to the bands grungier, gritter songs, or enhance the glittery, far-out feeling of their synth-heavy tracks.

By the time they reached "Gimme Sympathy" towards the end of their set, Haines stopped again to thank the fans that had been following them since they released the track in 2008. Sincere without pandering, she flashed a big smile before diving right into the first verse. The crowd exploded, middle-aged bald men and pop-punk young adults alike belting the lyrics "Who'd you rather be? The Beatles or the Rolling Stones?"

At this point in the show, the girl on the balcony with two bright pink Princess Leia buns nearly threw herself over the ledge.

She was jamming out to this colorful fan favorite off  Fantasies. The show plateaued a bit in energy for the next three songs before Metric returned to Fantasies to finish off. Spotlights flashing, Haines picked up a guitar for a electric finale, ending on "Gold Gun Girls."

Met with roaring and chanting from the crowd, the band returned to stage for a short encore, ending officially with what may be Metric's most notorious track; "Help I'm Alive." (Though it seemed Haines was a little less than thrilled to be performing the song.)

With Haine's stellar vocals, charismatic stage presence, and the bands mastery of both traditional and inventive sound, it's no mystery how they manage to keep touring and capturing the attention of audiences. Both young and old, synth or rock fan, or both, Metric's sound is so full of motion and life-force that it would be a challenge not to enjoy some aspect of a show like this. While still maintaining their own take on multiple genres, Metric offers something for everyone. 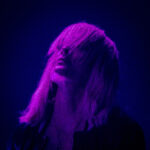 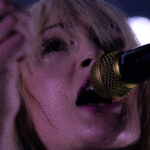 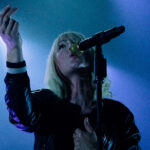 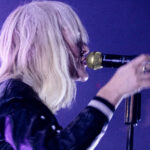 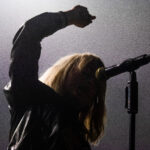