Julia Holter is an absolute star. I have never before interacted with an audience quite as reverent as this. It's hard to say that she's a pop star, an indie star, or an avant-garde supernova, but shine she does and star she is.

She's been to Boston twice before, both times at Great Scott. Brighton is a step up in size and a step down in grit, which suits her well. Her audience has grown steadily since the last time she was in town, but there were dozens who had been at BOTH of her previous shows. She gave old and new fans a full evening of her frightening and whimsical music, and her quietly hilarious self.

The dedicated fans knew what they wanted, and they clearly wanted harpsichord.

Every song that featured the instrument got loud shouts of praise. Other musical moments edged on the sublime and terrifying. I'm specifically thinking about the trumpet in "Les Jeux to You" that growled so loudly I thought a fire truck had come in the door. Older songs like "The Sea Calls to Me" did finally get people moving, but the night never turned into dancing. It was a rhythmic rocking back and forth, with Holter as conductor of the crowd.

What truly made the night was Holter's incredible stage presence.

The music, especially the pieces loaded with Latin lyrics, could easily have been staged at the MFA, but Holter ended every song with a small shake of the head, a quiet laugh, and a check in that we were all having a nice time. She was warm and funny the whole night, and proved it was not an act. When the encore finished she said "thanks, that's it!", threw on a hoodie, and ran to the merch table, where she signed and talked shop with fans until well after midnight. 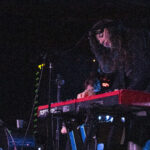 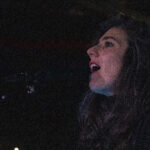 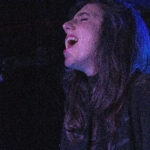 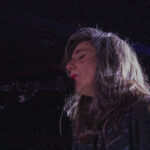