Gregory Alan Isakov Focuses on the Music at Royale

I knew this was going to be a great show when the lady at the coat check told me she saw Gregory Alan Isakov rehearsing and that he seemed like one of the most talented people she'd seen in this venue.

He definitely did have talent to spare. With incredible acoustic guitar technique and clear vocals, Isakov had a great performance ability. Isakov shared the stage with five other musicians during the majority of the set. He even spent a few songs bathed in the dark onstage where the spotlights were just on the band.

The band made this concert simply unforgettable.

With a banjo, violin, drum kit, cello, and double bass onstage, the night wasn't just about listening to the lyrics. Each of Isakov's band members had amazing solos where they could shine. The coolest part was watching them really focus in on playing their instruments. The whole audience could tell they were passionate about their craft and were putting 100% into their performance. The violin player even broke his bow at the whirlwind musical finale!

The concert was grabbed the audience's attention from the start, thanks to opening act Leif Vollebekk.

The Boston concert was his last on Isakov's tour before he left to record his own album. I could see that he was really giving himself over to the music for his special final performance. This was at least the first concert I'd seen where a performer came onstage to sing while playing an organ! Vollebekk had a unique sound, especially demonstrated in his song "Rest."

And Isakov let the audience in on some behind-the-scenes secrets.

For his encore, Isakov came out and sang a Bruce Springsteen cover, "Dry Lightning" with Vollekekk. His whole band came back out after. Everyone huddled together in front of one microphone at the front of the stage. The two songs they played like this, all close together and with just acoustic instruments, really gave the audience a feel for what the band is like behind the performances. I could see Isakov and the band laughing and swaying and really being themselves during this onstage jam-sesh. It was a real treat to end the night with. 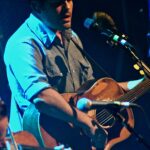 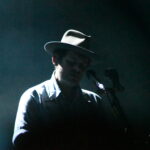 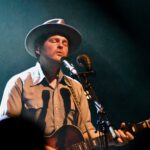 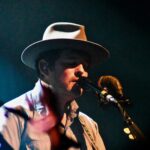