Damien Jurado: A Vessel for Storytelling 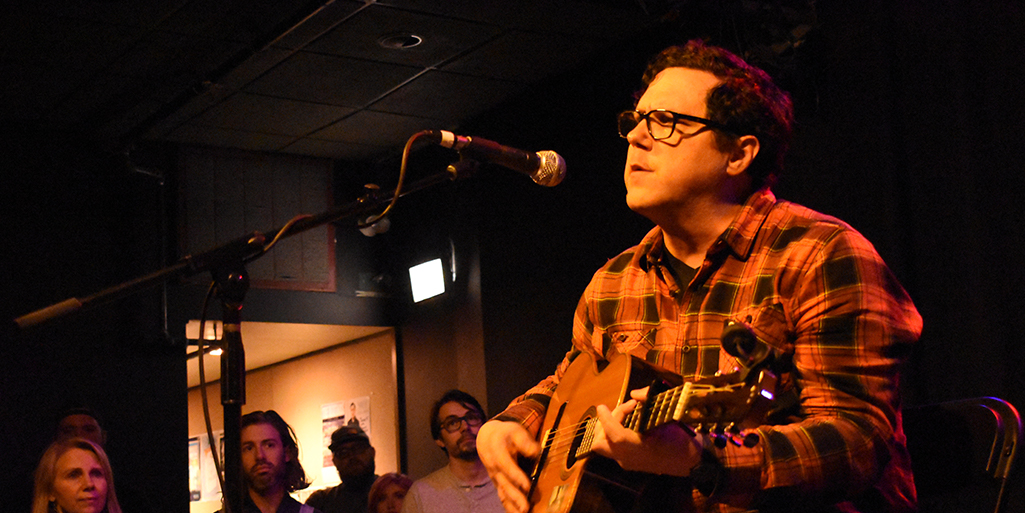 From his early days in Seattle to now touring the nation with a twenty-six-year discography under his belt, singer-songwriter Damien Jurado took the stage at Great Scott on Tuesday, May 15. Before the show, he sat down with WERS' Lily to discuss his role as a vessel for the stories he writes about, as well as his latest album In the Shape of a Storm, and a recent fan experience that was incredibly powerful for him.

Lily: My first question that I wanted to ask is that you've been releasing music for a little over twenty years now. Has your process changed over time? Obviously, you started writing back in the '90s, so how have things changed over the years for you?

Damien Jurado: I think it does change, and obviously it changes continuously to the point where I myself have a hard time keeping up with it all. It's sort of like, I've always compared myself as being a songwriter to being like a mailman, where they're not really my letters. These aren't really my stories, but I know they belong to someone else. I try to treat every song or letter with the greatest care and deliver that song or message in the best way I possibly can. But, being that postal service, the influx of letters that comes in is pretty overwhelming. I can hardly keep up with it, because each one is so different. When I first started out, there were some critics that complained because they said that they could never keep up with me [laughs]. I mean, I can barely keep up with me!

[Laughs] I can only imagine how crazy that gets. As I was listening to your music, I noticed that every song is like a story. Not that they all come together to this one big cohesive story at the end of an album, but how have you maintained that over the years? How do you craft those stories, and are there recurring stories or themes that might come back with each album?

DJ: That's a good question. I just sort of remain open to whatever comes my way. It's continually changing so much that even I have a hard time keeping up with it half the time. I find that the more I can try to not understand it, the saner I will be [laughs].

So, would you say you're almost like a vessel?

Do you have some favorite memories from earlier on in your career? Just any sort of memories that makes you smile when you think back on it?

DJ: Definitely. Mostly in the beginning, it was the people that gave me a chance. Seattle was a very tough time, because we were just coming out of the grunge thing and going more into the indie rock thing, and I wasn't either of those things. I would hop on these bills with really heavier bands. I'm just very thankful that people gave me a chance, even though I wasn't that kind of music. They still were open to the idea of me, and allowing me to be who I am. I think most of all, that and I meet a whole lot of great people. Some of them are with us, some of them no longer. Just seeing and being able to influence bands that have gone on to be quite a success. To be listed as an influencer, that means a whole lot.

I wanted to ask you about your thoughts on genre as well. You're sort of bending genre a little bit, like you wouldn't say indie rock, but you also wouldn't say grunge, so how have you walked that fine line? What's the inspiration for sort of playing in the middle?

How long have you been on this current tour?

DJ: Only for a few days, like five days or so.

Wow, so still pretty early on. That's great. How's the fan response been so far?

DJ: Really good. I used to go out with a backing band a lot, and I found that my fans really couldn't wait for the encore, which is me on my own. So, I thought, "Hm, maybe I should do more tours on my own." So, I took note and that's what I've started doing.

That's great to hear! This album, In the Shape of a Storm, seems like your most raw album ever. Just you and a guitar. Why is that?

What was one song, or maybe a couple, that make you smile when you think of recording them?

DJ: Probably "The Way You Want me to Be." The song "Anchors" is also like that for me, as is "Paper Gowns." Those are some of my favorite songs on the record for sure.

DJ: Yeah, I would say it lends itself more to the personal vibe. Again, they're all fiction [all songs]. But again, how it's recorded, that makes it more personal.

On this tour, are you excited for any particular cities?

DJ: I'm obviously very excited for tonight. We have two shows in New York, one of them is already sold-out. I mean I love playing shows.

What is it about playing live shows that keeps you coming back for more. Where you've been doing this for so long, what is it about the live experience that still makes you excited?

DJ: Honestly it is the meeting of fans that's my favorite thing. When you get to hear someone's story, and when you get to hear that a song of yours has affected their life, and then you get to hear how that affected their life, it's crazy. I met a guy the other night who just said to me, "I have a four-year-old kid, my wife is leaving me. And I don't know why, she still hasn't told me why." But, he goes, "Your music has gotten me through that." It's things like that, stories like that, that just make you go, "wow." When I'm writing these songs, I'm just within the confines of my four walls. I don't know where this will go, and who it's affecting. Touring is a way for me to meet people and see the people it's affecting.

Do you think about those people as you're writing your music?

DJ: I am thinking about those people. I don't care how sick of a song I write, I have to give the utmost care in my performances as I can, because I know it's for somebody's story, and I want to treat that with the most sensitivity as I can. I think that's what it is, because my audience-they're in these songs. I may not be, but they are. I think that's why people keep coming, for a healing experience.

Wow, that is amazing. I think that's it for me, but thank you so much for taking the time to sit down with me and have such a great conversation. Good luck with the show tonight, and have fun!