A Look Inside Roadrunner: The Bowery’s New Boston Venue

At 6:30 p.m. on Tuesday, concert-goers will file through the entrance of 89 Guest Street in Allston for the first time, as The Bowery Presents opens their newest venue, Roadrunner.

With a capacity of 3,500, Roadrunner is the largest indoor general admission venue in New England. This first-come-first-serve arrangement, said Bowery’s Marketing Manager Christine Varriale, was a decision made by thinking “from a show-goers perspective.”

Varriale added, “Us and our parent company have been successful with those types of venues, so [Roadrunner] is just kind of adding to that legacy.”

The Bowery Presents group includes the Sinclair in Cambridge and the Royale in Downtown Boston, as well as a couple of dozen venues spread across New York, Rhode Island, New Jersey and Pennsylvania.

Apart from its size, Roadrunner was a unique project for Bowery in that it marks the group’s first time building a venue from the ground up.

Observing the details of the space, it is apparent that this opportunity for complete design freedom was seized. “There really isn’t anything that wasn’t intentional,” said Andie Egan, the marketing director at Bowery.

A WALKTHROUGH OF ROADRUNNER

But Egan said she was assured that these finishing touches would come into place on time. “It’s not going to be an issue, but it’s going to be like ‘we’re sweeping up the last dust’ just as we’re opening the doors on Tuesday.”

Roadrunner is located a 3-minute walk from the top of Guest Street in Allston. Occupying 50,000 square feet, it takes up a rather small section in the grand scheme of the entire complex that is The TRACK at New Balance. The sports complex first broke ground in Boston Landing on April 1st, 2019 and includes a large athletics facility, laboratory space and now, music venue. Tucked within the building’s modern exterior, Roadrunner appears sleek and new. 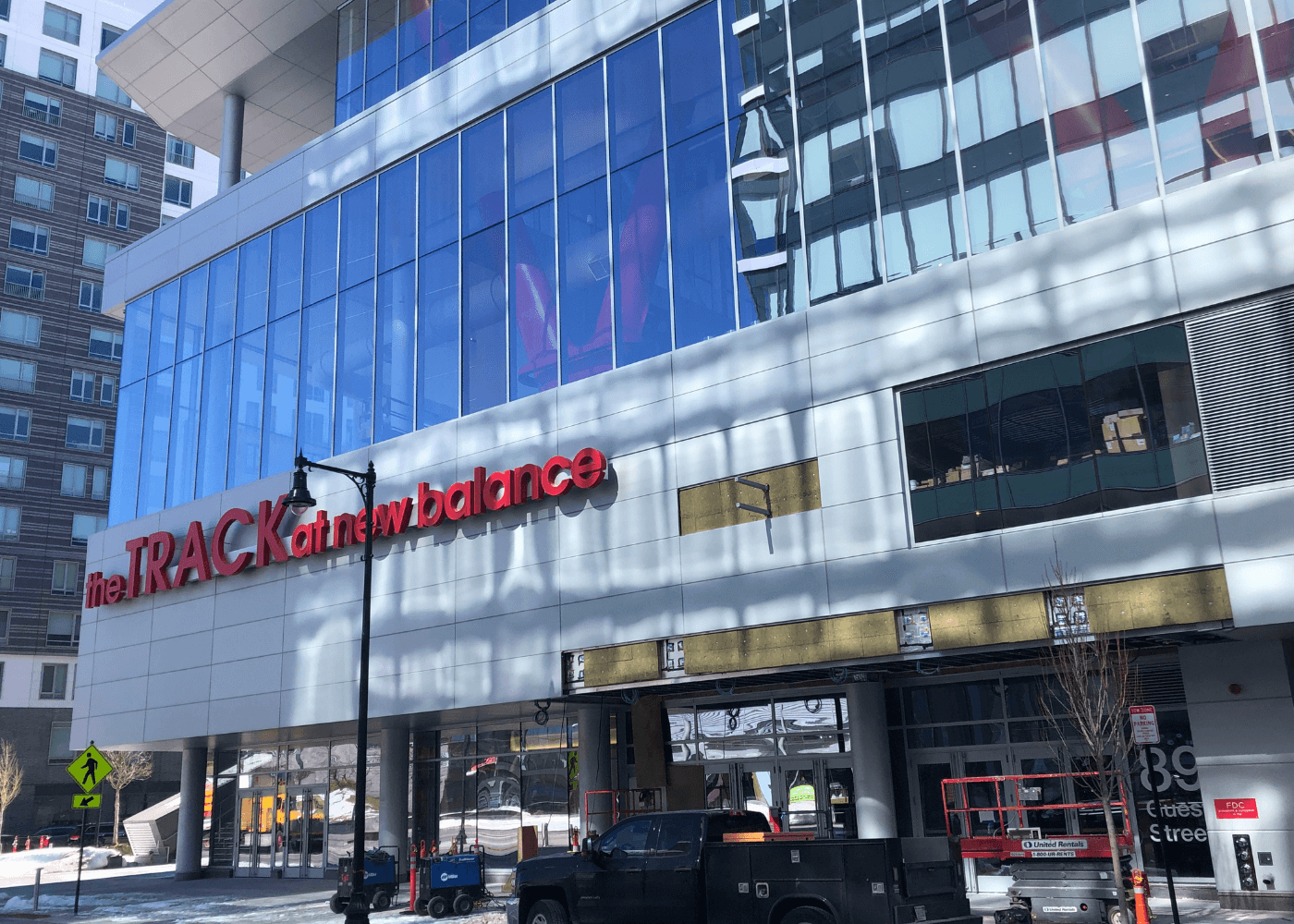 View of Roadrunner from the street while construction was still underway on March 4th, 2021. Photo by Nora Onanian

First stepping inside, Egan quickly pointed out that the open floor-plan gives concert-goers a view of the stage the second they are invited in. And not a bad one at that — the entrance and stage are somewhere under 100 yards within reach.

On the side wall, a large mural done by locally-based artist Felipe Ortise greets guests, one of the venue’s many nods to its namesake — the Modern Lovers song “Roadrunner.” The visual brings the lyrics of the 1972 hit to life. It depicts a red 70s Plymouth Roadrunner speeding around a bend of road, recognizable pieces of Boston’s skyline looming behind. 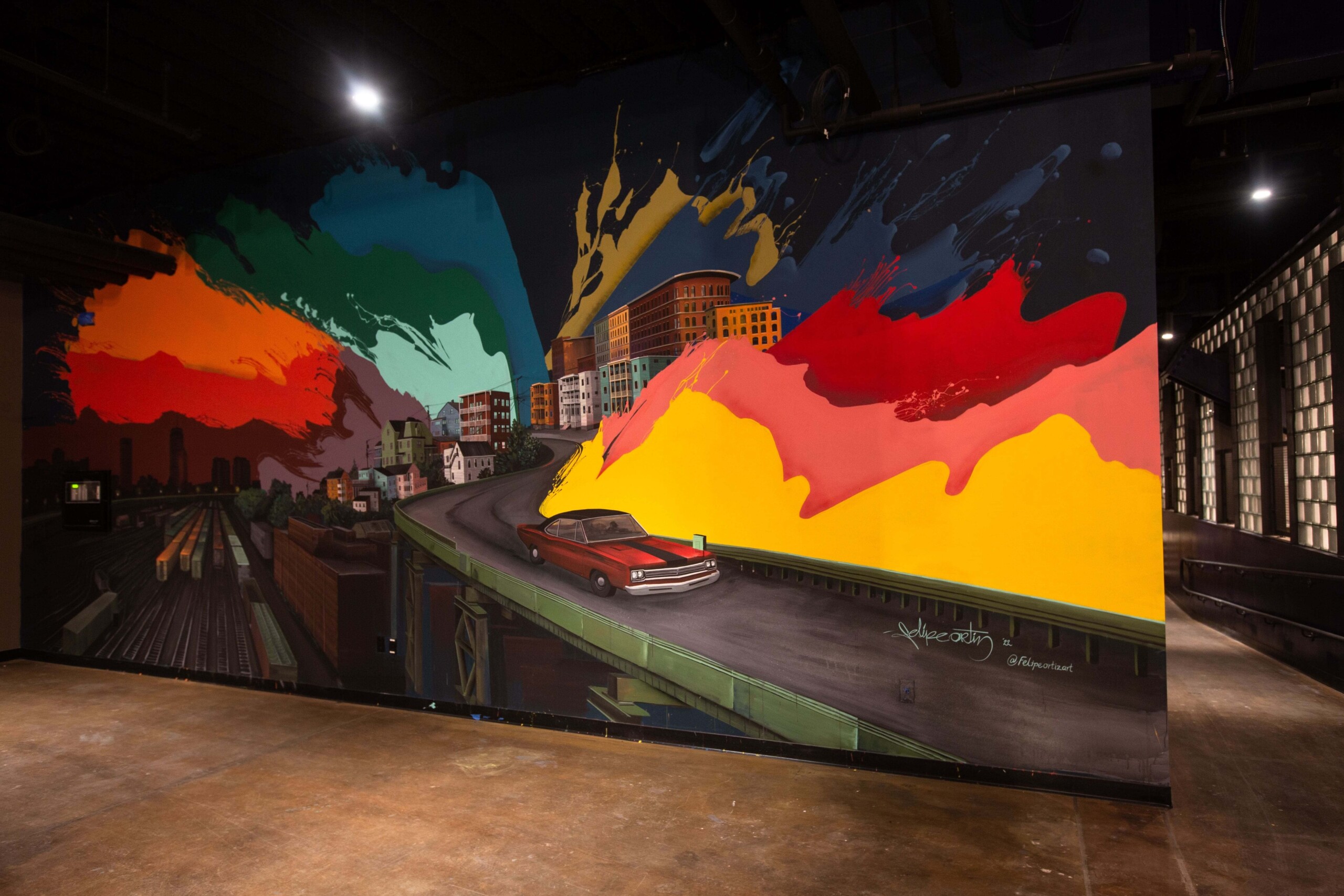 The color palette, darker blues and greens contrast with brighter shades of yellow, orange, red, captures the vibrancy of the “modern moonlight,” sung about by Jonathan Richman. The city’s neon glow pairing with the radio on is what provokes him to profess, “I’m in love with Massachusetts.” 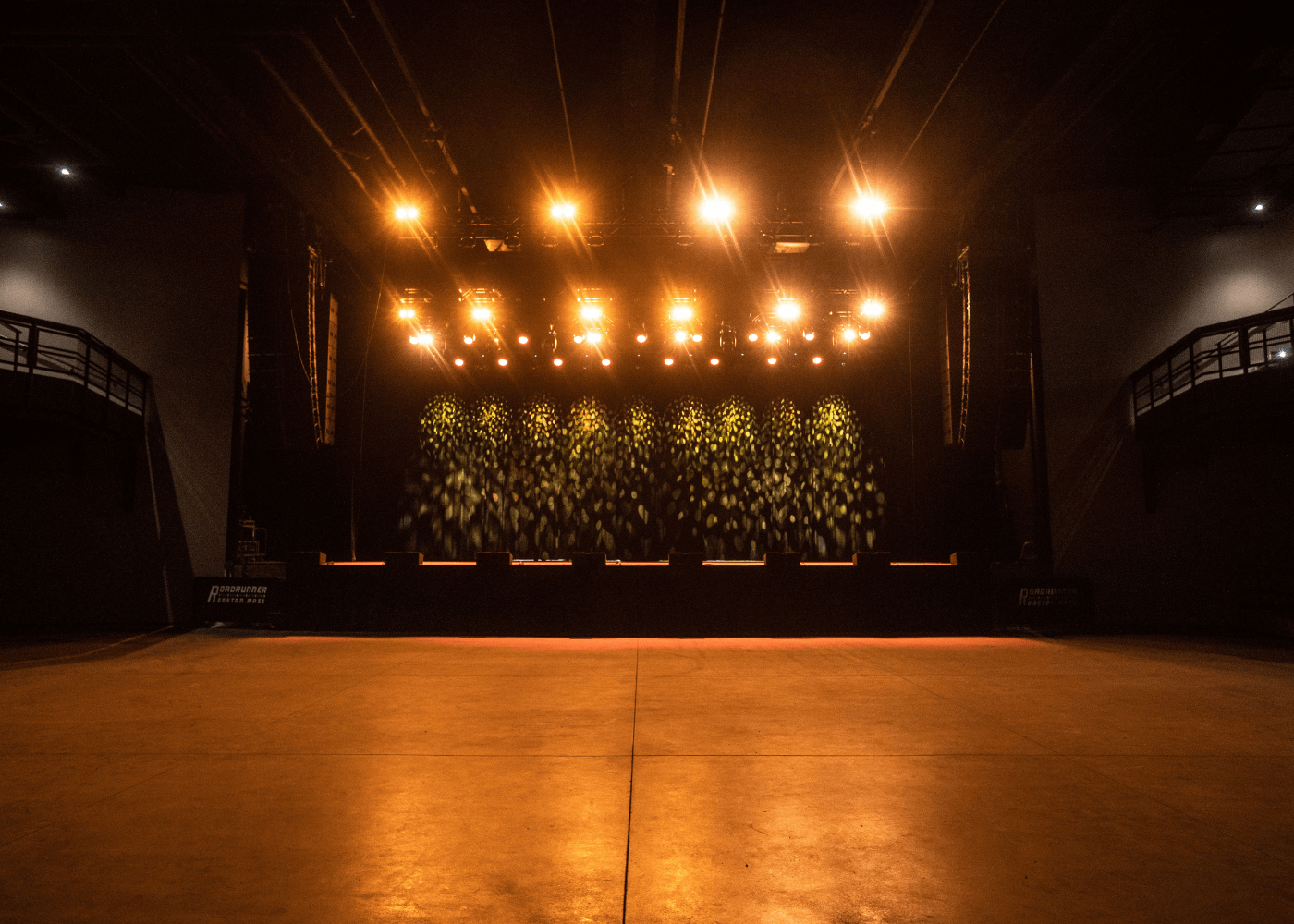 A view of Roadrunner's 60-foot stage from the 2,000-person capacity floor. Photo by Ben Stas, Noise Floor / The Bowery Presents

Also visible upon entrance is a skate ramp placed vertically up a lofty wall, an interest-piece that brings concert-goers to the main stairs leading to the mezzanine.

THE FLOOR AND FIRST-LEVEL AMENITIES

The floor space, lowered a short couple of steps or rampway down, boasts room for 2,000-people. But Egan explained one of the venue’s unique features is what she called “scalable capacity.” The lights and sound fixtures are on tracks on the ceiling so that they can be pulled up and additions can be put on the stage, cutting back on standing room and helping to create a more intimate feel.

First-floor amenities include designated areas for merch sales, coat check, two communal bathrooms, and three bars. To the right upon entrance is an area for coat check and then a large counter set-up for merch sales (no more fold-up tables and cramped-feeling for those behind the counter). The venue’s main bar faces parallel to the stage, though on the opposite end of the space. Decorated with tiles, a glass back-splash, and reclaimed wood gives it what Egan describes as a “fieldhouse-vibe,” a nod to Boston’s athletics, “without going full Fenway,” Varriale finished Egan’s sentence.

The stage itself is 60-feet wide, a size that also can be manipulated with the use of curtains and other set-up alterations. Whether on stage or on the floor, the venue maintains a fairly intimate feel despite the large numbers.

Out back of the stage, there is a space for laundry and a set of offices for the touring and production crew. There is also a kitchen and lounge area where an artist’s friends or family can remain during the show without being directly in the artist’s space. A set of stairs leads this lounge to the dressing rooms area, with a large art piece on the way up, an interpretation on the Modern Lovers “Roadrunner” CD cover. 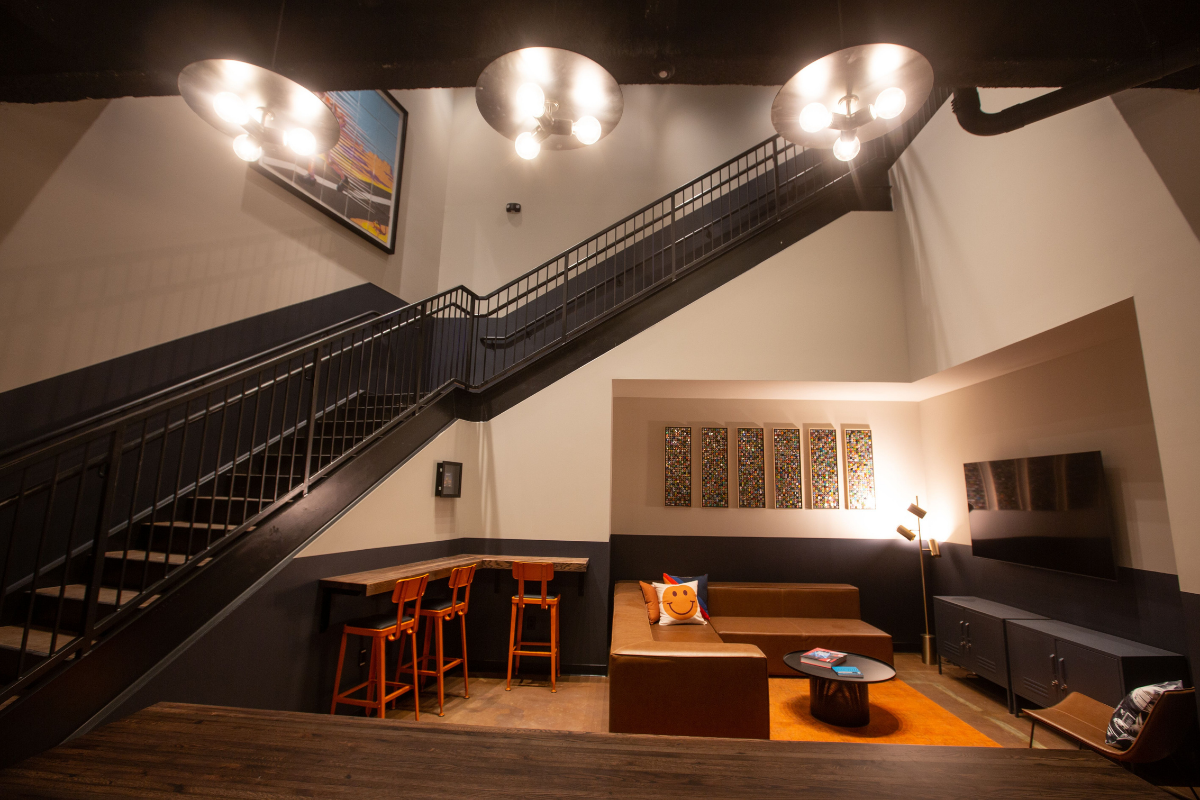 A kitchen and lounge spage backstage for artists' friends and family. Photo by Ben Stas, Noise Floor / The Bowery Presents

Stephen Martyak, the lead designer, said that when decorating and referencing the Modern Lovers, they were “trying to come up with subtle ways to have a nod without being too literal.”

“When you think of Boston sports is definitely at the front of people’s minds,” said Christine Varriale. “But there’s also the rich music history that we wanted to touch on too.”

The dressing rooms are a part of Roadrunner that particularly execute Varriale and Martyak’s words.

In each of the dressing rooms, the color palette is inspired by a Boston sports team and each contains art done in panels on longboards that takes cover art from Boston-based artists that are no longer touring. One of two dressing rooms made for headlining acts is the Donna Summer room, complete with a disco ball pillow. 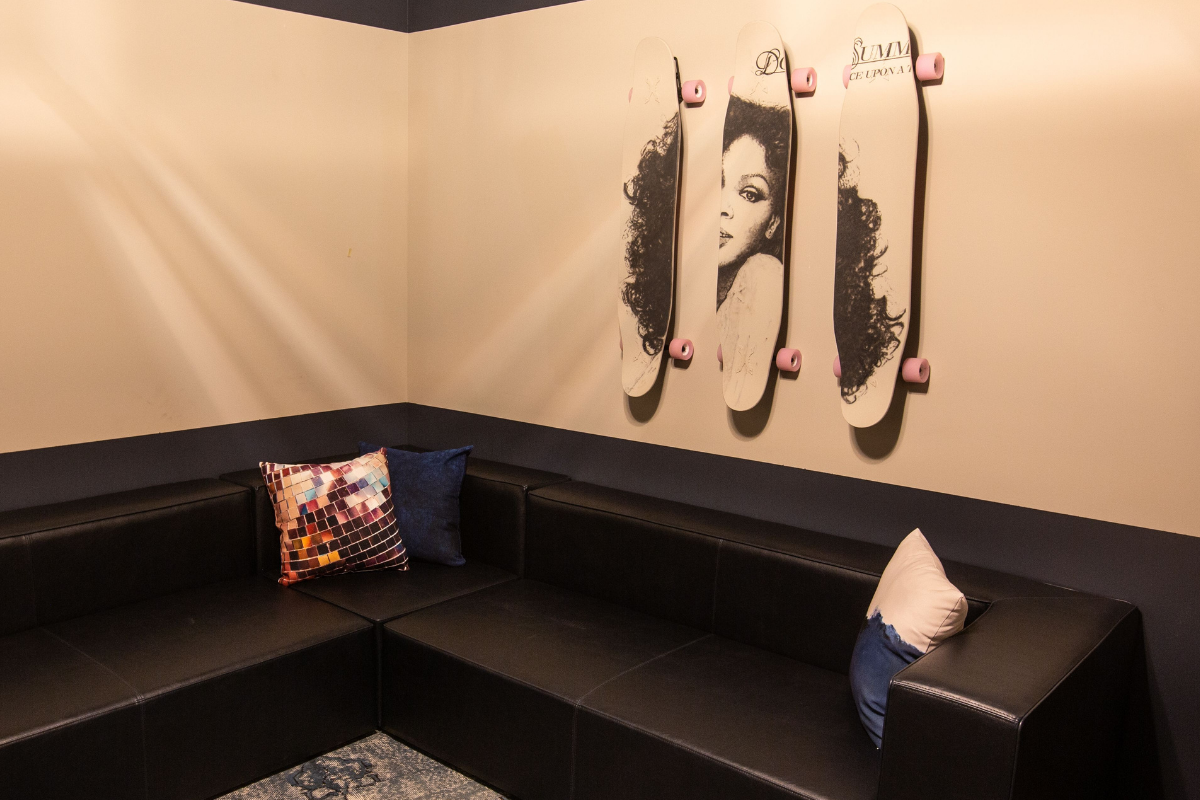 Egan added that the dressing rooms were intended to feel like hotel rooms, so the artists feel comfortable and at home and not just a utilitarian, ‘here’s a space to sit.’”

THE MEZZANINE AND SECOND-LEVEL AMENITIES

The mezzanine is set up in tiers, with each tier going roughly three or four people deep. This design helps ensure that there are quality sight-lines even at the furthest, highest spot in the venue (yes, this specific view was indeed sought after and tested). Railings along the mezzanine have ledges for drinks and leaning onto. The entire mezzanine is also attentionally angled to face the stage unlike other venues with a straight-edged perimeter of the balcony.

A strip of LED lights runs along the bottom edge of the mezzanine space. With the potential for customization, the lights are sure to be a key part of performers’ stage designs. 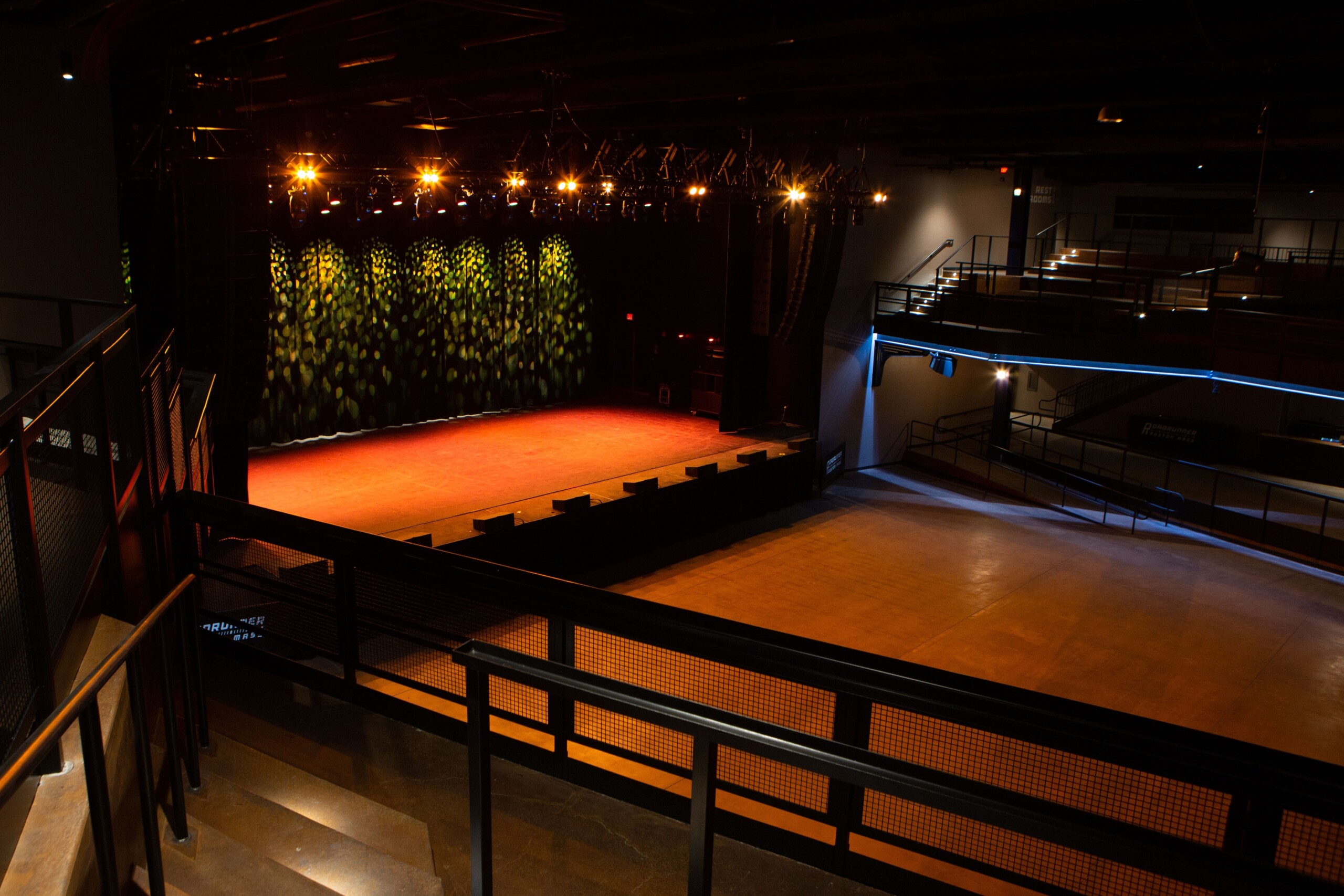 A view of Roadrunner's stage from the mezzanine at stage right. Photo by Ben Stas, Noise Floor / The Bowery Presents

Varriale pointed out that during the first few shows as people are “getting their footing at the new venue and kind of figuring out where they want to be,” it will be nice to have the option to move freely from floor to mezzanine, the general-admission nature giving free access. Some shows may section off the mezzanine sections closest to each side of the stage, but there will always be an option between the two-levels, much like the Bowery’s Sinclair.

For amenities, the second floor again includes three bars total — two on either side of the stage and one main bar, this one set even further back and apart from the noise. With a large “Roadrunner” side fashioned out of reflective traffic sign strips overhead, the main bar area includes a limited selection of concession items, seating opportunities, charging stations, and a large screen with live footage of the stage. 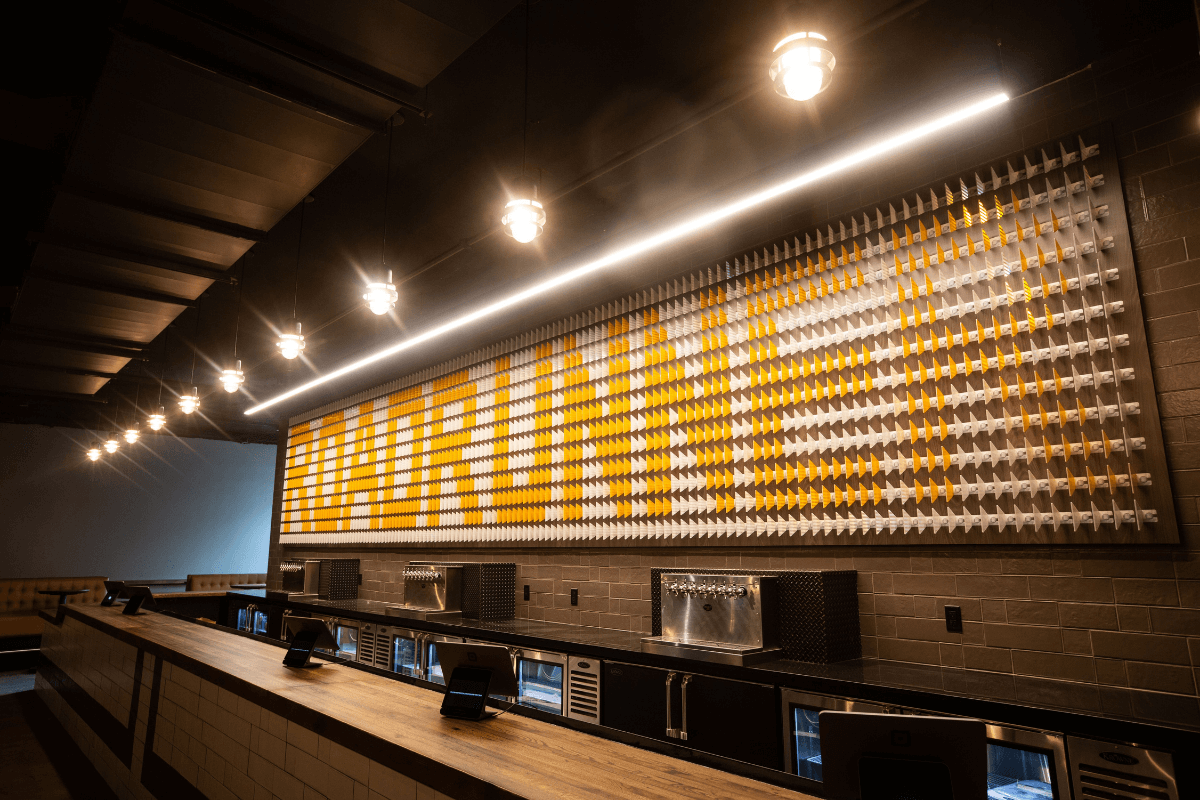 A large Roadrunner sign fashioned out of reflective traffic signs is proudly displayed behind the second-level bar. Photo by Ben Stas, Noise Floor / The Bowery Presents

Four gender-neutral individual bathrooms can be found in the second-level bar area. Along with the second level’s three communal bathrooms, these bring the venue’s total bathroom count to nine. All include signage that encourages guests to attend whichever restroom they are most comfortable with, and have visual cues as to what fixtures are offered inside.

In addition to two staircases that lead to the mezzanine, there is elevator access. Ramps ensure all floor space is accessible. And additionally, the backstage area, all bathrooms, showers and dressing rooms are accessible. Christine Varriale explained that while accessibility is something Roadrunner had to do for code, they especially wanted to make sure that it was something touched on with the venue.

On the upper level there are spots marked off with blue painted stripes on the floor for ADA seating. In these spaces, wheelchair users can see the stage unobstructed by bodies and have a lowered railing. Varriale also said the venue has a level of flexibility in terms of creating more ADA sections since the venue is fully accessible.

VIPS ARE INVITED INTO “THE GUEST ROOM”

A room the Bowery fittingly calls “The Guest Room” after the street address and concept of welcoming in people is available as a VIP area. The space can be accessed with an upgraded ticket or through attending a private event. It is fashioned with its own private bathrooms, complimentary coat check, bar, seating area, stage live-feed screen and has its own separate entrance on the outside of the venue. Andie Egan described the Guest Room as “a place to hang out if you want to get away from the crowd for a moment.”

A look at Roadrunner’s calendar of upcoming events shows a variety in the talents showcased — from Olivia Rodrigo to locals the Dropkick Murphys, to Khruangbin. Egan commented on the wide range, “That’s what we were going for. We wanted this to be a place where there’s going to be something for everyone.”

Most shows will be all ages, with just a few exceptions, such as Lane 8 and another EDM act. Per Roadrunner’s FAQ, it is possible for those under 18 to attend such shows when accompanied by a legal guardian.

A WAY FOR THE VENUES TO GROW WITH THE ARTISTS

Christine Varriale said that another intention of the venue is “to help artists grow in their careers and have appropriately sized rooms as they grow.” She pointed to examples like Billy Strings, who will be the very first artist to take the stage at Roadrunner with his performance on Tuesday night. “We had him at Great Scott, we had him at Sinclair, we had him at the Wang theater this past fall,” Varriale said. “And now we have him at Roadrunner, so that’s an artist we’ve been booking since he was on a smaller scale and have continued that relationship.”

Egan added on the examples of Khruangbin, Lake Street Dive and Mitski, all of who have had smaller shows through the Bowery earlier on in their careers and have made it big enough to have an expected turnout nearing 3,500.

The venue is not just a stepping stone for artists, but also employees within Bowery. A large portion of the staff have previously worked at other venues and have been appointed to similar or higher roles at the venue. Stephen Martyak, the lead designer responsible for touches like the skateboard ramp and longboard artist tributes, previously worked on the Sinclair.

A SPACE DESIGNED FOR THE COMFORT OF ARTISTS AND CONCERT-GOERS

Despite Roadrunner being a brand new venue, Andie Egan said they wanted it to “feel lived in.” Reflecting back on all of the details of the venue, she said that the intention while designing was “to keep artists and fans alike in mind.”

Whether it be the lengths to which Roadrunner prioritized accessibility, the close proximity of bathrooms and bars, the sight-lines, or the way dressing rooms were modeled like hotels for comfort, Roadrunner is full of details waiting to be appreciated.

Weekly News: Inside the Black Market for Boston Marathon Bibs