“One of the most sonically beautiful sets of the entire festival.”

Despite the likes of The 1975, The XX, Tegan and Sara, and others all slotted to perform on Saturday at Boston Calling, there seemed to be one band on the forefront of everyone’s mind. London, England’s Mumford and Sons were the center of excitement for the second day of the star studded festival, and they carried that energy into one of the most jaw dropping performances of the weekend. 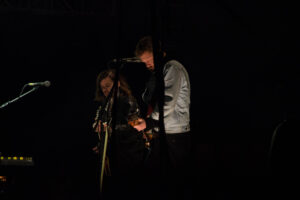 Mumford And Sons at Boston Calling – Photo by Bethany Owens

The four piece folk band delivered a powerful performance with very little on the actual stage. Lead vocalist Marcus Mumford’s warm voice reverberated over one of the largest crowds of the entire weekend, pulling on the heartstrings of the captivated crowd with somber lyrics and beautiful harmonies. The performance was a roller coaster of energy, as the band transitioned between upbeat foot-stomping folk anthems like “Little Lion Man” and more somber ballads such as 2011’s “Home.”

While other headliners at Boston Calling relied on heavy onstage production to keep things interesting, Mumford and Sons captivated the crowd by keeping things simple, and by doing so had one of the most sonically beautiful sets of the entire festival. Beyond a relatively simple light show, Mumford and Sons let their unique brand of foot-stomping folk stand alone as the focal point of their performance. The band has a huge surprise for their final song. Nathaniel Ratefill joined Mumford and Sons on stage for a very special rendition of The Beatles‘ “With A Little Help From My Friends.” The enormous crowd sang along louder than any point in the weekend for Saturday’s final song before returning home to prepare for one more day of Boston Calling.