Juliana Hatfield and Her Journey Through Isolation 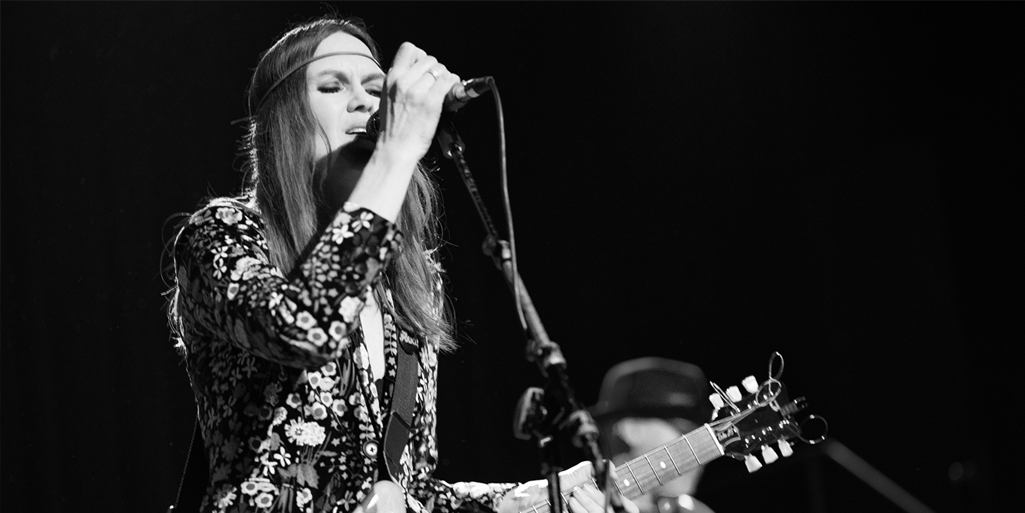 Boston's own Juliana Hatfield is gearing up to release her nineteenth studio album Blood later this year. She recently sat down with Tatum Jenkins, our music coordinator. They talked about life in quarantine, her beloved cover albums, and more.

I WANTED TO START BY TALKING ABOUT YOUR NEW SONG, "MOUTHFUL OF BLOOD." I ESPECIALLY LOVE THE SOUND OF IT AND I WOULD LOVE SOME INSIGHT INTO THE PROCESS OF WRITING AND CREATING THAT SONG.

Juliana Hatfield: It was a kind of slow process because I was working at home. Normally, I write songs and then I go into the recording studio and record it all at once. But because everything shut down a year ago, I started figuring out how to record with my laptop. That kind of slowed my whole process down. I was writing piece by piece and recording - I had a chord progression I was recording - into my computer and then I would kind of add on and so it was a really drawn out process. And the lyrics also took a while, and they were the last part of it.

WOULD YOU SAY HAVING TO LEARN THESE THINGS ON YOUR OWN AND DO IT FROM HOME HAS CHANGED YOUR CREATIVE PROCESS IN ANY WAY?

JH: Not really, I mean not essentially. I think the only difference is that it just takes me longer to record at home just because I've become a little lazy on my own. I work for an hour and then I would be burned out by trying to be an engineer because I'm not really good at technology.

ARE YOU EXCITED TO TOUR AGAIN, OR ARE YOU ENJOYING THE STRANGE RHYTHM THAT QUARANTINE HAS ESTABLISHED?

JH: If I'm honest, I would say that I'm not totally looking forward to touring because touring is complicated and it's difficult just logistically and physically. It's worth it and it can be really great to share that electricity with people out there on the road, but I have to say I've really enjoyed not touring. It's been kind of rejuvenating, the alone time has been rejuvenating for me.

HAVE YOU DISCOVERED ANY NEW HOBBIES?

JH: I've figured out how to record into GarageBand on my laptop, which is a big thing for me. It was a big learning curve for me. The other thing is I started running. When my gym closed down I just started running outside, and I've continued that. That has felt really good, and I think I'm going to just keep doing that.

WE HAVE A BIG EMPHASIS ON COMMUNITY AND STAYING LOCAL HERE AT WERS. DO YOU FEEL THAT BOSTON HAS HAD ANY SORT OF IMPACT ON YOUR ART AND HOW YOU DRAW INSPIRATION FROM YOUR ENVIRONMENT?

JH: Well, I really like the changing of the seasons. I find it invigorates me, the cold and autumn, and the seasons can really influence my writing. I mean, I wrote a whole song about the heat wave a couple years ago, but it was all about suffering through one of our horrible, humid heat waves. Also, I like that artists in Boston are all about the work and not about networking. It's not about desperately striving for fame. Everyone is low key and they just want to put their heads down and do the work. It's not about hype, and I really like that.

YOU'VE COLLABORATED WITH A LOT OF DIFFERENT MUSICIANS. WHAT DO YOU LIKE MOST ABOUT COLLABORATION?

DO YOU HAVE ANY DREAM COLLABORATORS?

JH: I think I've already worked with some of them like Matthew and Paul Westerberg (we made an album together). Some of them you know… some dreams have already come true. I don't really have anything specific, no one in particular that I'm thinking of, but I mean there's lots of people I'd love to sing with some day.

WHAT HAVE YOU LEARNED FROM BEING IN SO MANY BANDS? HOW HAVE THOSE OPPORTUNITIES ALLOWED YOU TO EXPLORE DIFFERENT CREATIVE AVENUES?

JH: I think I've learned that I have a certain way of doing things and a certain way of writing and singing that's pretty ingrained. It seems really biological; the things that I do can't really - they don't really change much. So there's a certain amount of adapting to each other when I'm collaborating with someone. We're both trying to keep our own instincts intact, but also somehow blend with the other person. But I don't ever really change what I do. It's all myself and I can't ever really escape myself, but it's good to have some fresh stuff mixed in.

WAS THERE ANYONE IN PARTICULAR THAT REALLY PUSHED YOU TO LEAN INTO YOUR OWN INSTINCTS AND TRUST YOURSELF?

JH: I think that whenever I'm working with someone, I think there's an understanding that no one wants to be pushed too far outside of the comfort zone, like no one wants to be made uncomfortable. It's good to be pushed a little bit outside the comfort zone, and just to stretch enough to get out of your own habits. But I think we're pretty respectful of each other's comfort level, and there's a bit of sensitivity when you're collaborating.

IS THERE ANYONE THAT YOU WOULD CITE AS MAJOR INFLUENCES?

JH: There are certain bands that were really important to me when I was younger like R.E.M and the band X from LA and The Replacements, Dinosaur Jr. Each of them was really different in terms of sound, but I think they all had a real musical originality and integrity. I just learned from them to be true to my own muse and not to tailor my music to the marketplace, like not try to make anything sound more commercial, but rather to just really tune into my own instincts. And each of those bands were really tuned into their own originality.

HAVE YOU EVER FELT PRESSURED TO MAKE COMMERCIAL MUSIC OR HAVE YOU ALWAYS FELT TRUE TO YOUR OWN SOUND?

JH: I think mostly I've been mostly left to be myself. I haven't allowed myself to get into situations where I felt pressured to make hits or to make commercial music. I've been lucky that people have let me do my own thing. I think people realize that they can't push me around artistically.

WHAT MADE YOU DECIDE TO DO TWO COVER ALBUMS, SPECIFICALLY OF OLIVIA NEWTON JOHN AND THE POLICE? IT'S SUCH A COOL PROJECT!

JH: Those are two more artists that were really important to me when I was younger, like, when I was in high school. And even before high school with Olivia Newton John. It was just really, really important to me at certain times in my life and I got so much joy and inspiration from singing along to them that I just wanted to show how much they meant to me. I wanted to prove my love by making those albums, just to escape reality for a while and just immerse myself in these songs that were so much fun to sing.

WERE THERE ANY SORT OF NOTABLE REACTIONS TO DOING COVERS OF THESE POPULAR ARTISTS?

JH: I think people were mostly just pretty psyched about it. And I think that some people, after hearing my covers, went back and listened again to the original artist and I think maybe my record made them see Olivia or The Police in a new light or made them appreciate them in a different way possibly.

ARE THERE ANY SORT OF COMFORT ARTISTS THAT YOU COME BACK TO OVER AND OVER AGAIN?

JH: Well yeah, Olivia Newton John, I think I still listen to her and she hasn't lost any of her appeal for me. I still love singing along to the songs, and ELO is another one. I never stopped loving ELO.

I'M ALSO CURIOUS ABOUT WHAT INSPIRED YOU TO WRITE YOUR MEMOIR. IS THERE ANY SORT OF MESSAGE ABOUT YOURSELF OR YOUR CAREER THAT YOU FELT YOU HAD TO EXPRESS THROUGH WRITING A BOOK RATHER THAN THROUGH MUSIC?

JH: It was more just the idea of trying to start and finish a full book that I was interested in. I wanted to see if I could set this goal for myself, and then complete the goal. And I don't really have a good imagination, so I couldn't really think of any stories to tell other than just the truth about myself. And so I just used myself as a subject because I had no other ideas.

WERE THERE ANY SURPRISING REACTIONS TO YOUR MEMOIR OR ANYONE YOU WERE SORT OF SCARED TO HAVE READ IT?

JH: Not at the time, but I think when I was writing it, I couldn't allow myself to worry about what anyone would think or I think the fear would be too crippling. I think a lot of writers probably  grapple with that. When you're writing about real people, there's that possibility that those people will be upset by what you've written. So I was kind of doing it with blinders on and, only now looking back do I feel...like I feel a little bit of regret about some of the things I wrote. I kind of wished that I had not written so much maybe, and maybe just been a little less open.

DO YOU THINK WRITING THIS MEMOIR MADE YOU FEEL MORE PROTECTIVE OF YOUR PRIVACY OR DO YOU THINK IT ALLOWED YOU TO OPEN UP MORE TO YOUR AUDIENCE?

JH: I feel that most of my private life is private, and I think I was really honest about emotions. I let people in on emotional things, but as far as my actual day-to-day, private life, I really don't think anyone knows anything about that. Other than the things that were going on in the tour that I was writing about in the memoir. I've done a really good job of keeping my private life private.

ANY NEW PROJECTS YOU CAN TELL US ABOUT?

JH: I'm trying to start the next cover album. I'm going to do another one, but I just have to narrow it down to one artist or band because I haven't decided yet. But that's the next thing I'm going to do.

Juliana Hatfield's nineteenth album, Blood, is out May 14. Lead single "Mouthful of Blood" is available now.