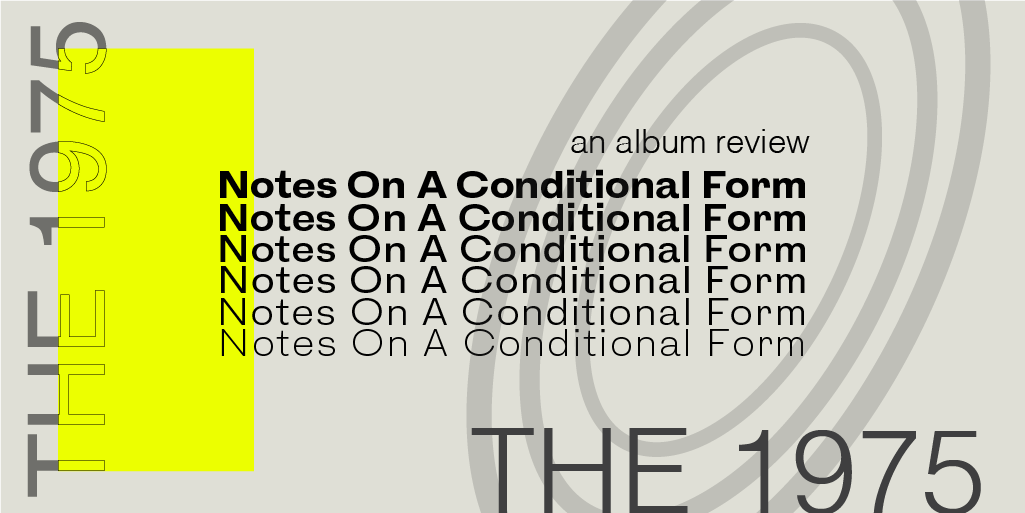 Album: Notes on a Conditional Form

For Fans Of: The Japanese House, The Neighbourhood, Wallows

After the release of even just a couple of singles, you can usually guess with some accuracy what the rest of a record will entail, but The 1975 is far from the usual. With each single released from the band's new album Notes on a Conditional Form I became increasingly intrigued. The singles alone are littered with a diverse array of sounds and feelings, ranging from bright '80s synth-pop to screaming guitars and angry lyrics, all the way to atmospheric ambience and peace.

The group started releasing music in 2012 and has since put out three other records and four EPs. Their past music launched them into stardom with its innovative and edgy lyrics, catchy guitar riffs, and calls for justice regarding social issues (learn more about the band's rise to fame in our Artist Profile on The 1975). However, Notes is their first record that sounds utterly open, pure, and personal. Overall, it feels like a warm thank you letter to life.

The group sets the tone for something different right from the first track.

They start off with their standard self-titled opening track, but abandon the previous theme and lyrics. In its place is a more punk angle to kick off the new record. Twinkling piano notes play as climate activist Greta Thunberg speaks. Now, you might be thinking, that's not punk. But punk isn't about loud instruments according to lead singer Matty Healy - it's about conviction. Greta's arguably one of the most known, confident, and persuasive environmentalists right now, and that's punk.

On the song "The 1975," the band hands Greta the microphone to address important matters like climate change and the ecological crisis. She urges people to pay attention and to protest everything that pushes society closer to disastrous consequences. Needless to say, she boosts The 1975's standard for political tunes up a level.

In the track she implores everyone to:

"Please wake up and make the changes required possible. To do your best is no longer good enough. We must all do the seemingly impossible. Today, we use about 100 million barrels of oil every single day. There are no politics to change that. There are no rules to keep that oil in the ground. So, we can no longer save the world by playing by the rules because the rules have to be changed. Everything needs to change, and it has to start today. So everyone out there, it is now time for civil disobedience. It is time to rebel."

The momentum keeps crashing forward with the second track, "People."

Right after Greta calls for an uprising, punk drums rapidly bang as an electric guitar rings, signaling a different song embodying those calm words is starting. Matty screams "Wake up! Wake up! Wake up!/It's Monday morning and we've only got a thousand of them left." This first instance of Healy screaming on a record intensifies the gravity of the lyrics. He's angry with progressive voices and ideals being drowned out.

From the screeching guitar riff, screaming vocals, and punk beat, it sounds like pure, red anger. However, the lyrics also seem to come from a place of confusion as to why people don't care or understand that we have to make inconvenient lifestyle changes to secure our future. Matty sounds fed up with the fact that the world's not evolving and racing forward as much as he'd like. The loud sounds just add urgency to the message: They make you wake up and listen.

Since we are constantly flooded with information online and outside, it's hard for things to be startling or to grab people's attention. We've become somewhat numb or used to seemingly everything. The 1975 make sure people would not skip past this tune due to sheer boredom by completely inverting our expectations of the band. We could easily foresee a protest song about social issues by the group, but a political punk jam featuring Matty screaming? I never saw that coming. The 1975 don't just tell us to stay awake and aware, but their songs personify those words and feelings.

Despite the startling punk opening, the majority of the record flows in and out of countless genres, blending them all while maintaining a more peaceful feeling overall.

At 80 minutes, Notes is the group's longest and most eccentrically uncentered album. It weaves through topics concerning everyday life through the lens of fictional characters and Matty himself. He writes about being alone at a computer, a couple arguing about each other's bathroom habits, and even being trapped in boring conversations.

Flavors of country, folk, pop, electronic, jazz, and hip-hop meld throughout the sonically experimental record. It amazes me how they can seamlessly jump into any genre and sound incredible. For example, I'm not typically one to love country music, but I've been blasting their country song "Roadkill" on repeat since the album's release. The song's a lighthearted emo paradox with its lyrically funny reflection on the band's time on the road. Make sure to pay attention to the words in this one for a laugh.

In with the old and new.

It wouldn't be a 1975 album without numerous nods to past works. Whether that's through referencing postmodernism or adding identical lyrics and sounds, the band has made it a point to continue stories and ideas from their previous songs. On top of that, they've also recycled the name of the past EP Music For Cars to place on an elegant orchestral piece in Notes. I always love listening to The 1975's new music for this reason. Everything lies beneath the surface. Maybe you won't catch it on first, second, third, or twelfth listen, but there's always more to hear and understand with their music.

While this album consistently embraces earlier work, it also launches the band into new territory. From a production point of view, this is the group's most intricate, experimental, and patient work. One song will have a horn section, killer electric guitar riff, and auto-tuned vocals and percussion inspired by Kanye's The College Dropout, and then the next song will be a stripped-down folk tune.

The lyrics and the sounds accompanying them is the most interesting aspect of the album.

A lot of times, Matty pairs sounds and lyrics that oppose one another. If the song sounds upbeat and happy, the lyrics are probably critical and depressing. He doesn't always do that on Notes, though. That's what makes it feel so open and honest to me - it feels as though he finally let his guard down and is truly being open about his personal thoughts and being.

Rather than creating characters or commenting on the state of the world, he's vocalizing truths about himself. It's a blaring resolution of self-acceptance and appreciation towards life, family, and great friends. Matty even recorded a song that his dad wrote in the '90s, "Don't Worry." In it, his dad comforts and reassures Matty that it's okay to show emotion and affection. Piano softly plays as vocal harmonies hum in the background, then Matty and his dad start singing together. It stays simple and beautiful throughout.

This sentimental feeling remains for the next track, "Guys." It's a wholesome love song dedicated to Matty's lifelong friends, who also happen to be his bandmates. Clean, quiet electric guitar strums play as Matty reveals that the loves of his life are his friends. The song never tries to distract from the words by layering weird electronic sounds. It simply exists as a pure, sweet love song. The 1975 delivers an incredible, uplifting, genre-bending record. Now it's your turn to return the favor and see a glimmer into Matty's world by listening to this album.