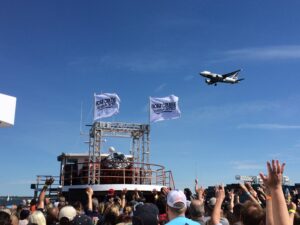 Sunday afternoon, in front of a dedicated crowd of fans, the Adam Ezra Group played a high-energy concert to celebrate the release of their new record.

The album, “Hurricane Wind,” was fan-funded and fan-produced, and is the band’s third studio effort.

So in keeping with that spirit of community and fun, how better to release a new record than on their annual cruise ship show, cruising the outskirts of Boston Harbor? Based on the performance put on by Ezra and the rest of the band, it would be safe to say the high seas are the perfect place.

Setting sail from the World Trade Center pier, Ezra and warm-up act the Mallet Brothers entertained the several-hundred-strong audience with music that straddled the line between alternative country and indie rock for a full three hours.

Aboard the Provincetown II, the show was a celebration of not only the new album, but also the fans that helped create it.

From Ezra’s first guitar chords, accompanied by an entire boat full of people raising their beverages to the sky, to the last sing-a-long rendition of “Let It Be” as the boat returned to dock, the entire set was a musical joyride. Ezra took a little drink himself and then burst into the annual cruise ship tradition of singing “I’m on a Boat,” in all its profanity-laced glory.

Halfway through the set, Ezra recounted the story behind “Hurricane Wind…”

Starting with 23 rough demos, the band crowd-funded money to record the music and then left the rest up to the fans – including the album’s artwork, title, and track listing. And for two weeks after release, “Hurricane Wind” will be available completely for free, as the Group attempts to spread the word about their new record.

In addition to playing the songs featured on the album, they played several fun covers, including The Band’s classic “Take a Load Off Annie” and the Beatles’ “Let It Be” as the final song in the set. Ezra included a vulgar and hilarious parody of “The Devil Went Down to Georgia” set in Boston, featuring a brief instrumental rendition of the Dropkick Murphys’ “I’m Shipping Up to Boston.” With the Boston skyline in the background, it felt like a fitting addition to the show and added some local humor to the experience.

As the boat passed islands, small fishing craft, and ferries full of curious onlookers, the party continued, as each band member demonstrated their ability. Fiddler Corinna Smith received much love from the audience for the melody she added, and the drummer Alex Martin wowed the crowd with an impressive drum solo that channeled a tribal energy. Ezra displayed his ability on several instruments, joining in on Martin’s solo as well. And the percussionist simply known as Turtle, who celebrated a birthday that afternoon, added some tasty rhythm underneath it all.

Altogether, the so-called “Bawstin Haabah” Cruise was a rewarding and friendly experience – the average listener couldn’t help but come away feeling like part of a big musical family.

With the sea all around, planes en route to Logan Airport close overhead, and music mixing with the ocean air, the cruise was a perfect way to enjoy a 60-degree summer afternoon. As Ezra himself said, “What’s better than this?”