Fresh off the release of their latest album ORION, X Ambassadors took the stage at Royale on Tuesday night.

This would be the first time the band ever played songs from their new album live in front of their fans, and needless to say, everyone packed tightly into the Royale was wicked excited.

"We have a great show for you guys tonight," lead singer Sam Harris announced with a huge smile on his face. "We're going to play some newer things, and some old things too."

The band came out swinging from the very first song, with Sam Harris dancing about the stage, while drummer Adam Levin absolutely killed it on his kit.

Once Sam led his 90% blind brother Casey Harris to his piano setup, Casey also was tearing it up on stage, at times even kneeling down and playing his piano like the ultimate Rockstar he is.

While Sam Harris delivered some of the best live vocals I've ever heard in my life (he hit high notes that some artists couldn't hit without autotune), he was also the master of many instruments. He switched between singing, strumming several guitars-and even slapping the strings of one for a super cool effect-and jamming out on a saxophone next to his mic stand.

That's right, I said saxophone. That's how you know this was a classy show.

X Ambassadors rolled from song to song at the beginning of their set, kicking off their hit song "Jungle" with a crazy guitar solo that vibrated in my bones.

The crowd was absolutely jazzed, clapping and singing along. The audience was singing the lyrics back so crystal clear that it sounded as if they were mic'ed up.

For the first half of the set, X Ambassadors playing several upbeat songs in a row, leading to a frenzy of rock music and cheers from the crowd. The show stopped for nothing, not even when Casey Harris's mic pack fell to the floor. He continued playing the piano while a crew member slunk on stage and re-attached it for him.

After the high-energy beginning, the band took a moment to slow things down.

"You still hanging in there with me, Boston?" Sam Harris asked as he re-attached his mic to the stand and pulled out an acoustic guitar.

The crowd replied with a resounding set of cheers. Clearly, they were with the guys til the end of the line.

Before playing their hit song "Lowlife," Sam Harris spoke to the audience about feeling down and out on yourself.

"I try to be f***ing perfect and it doesn't work," he said. "Some days, it feels like everything comes crashing downs and you feel so low, you feel rock bottom, like you'll never pick yourself back up again.

"Let me tell you something," Sam Harris continued, "we all feel like that and it's okay."

He then asked the crowd, "Do I have any lowlife's here in the crowd tonight?"

The crowd screamed in delight and sang along with all of the words to "Low Life" like it was their life's work. The band felt so connected to their fans in that moment, and for the rest of the show, it seemed as if both artist and audience were one and the same. 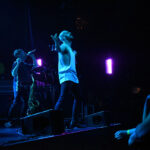 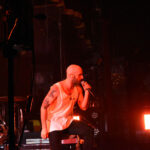 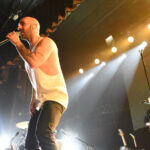 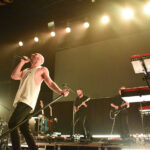 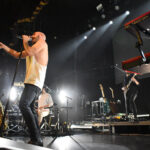 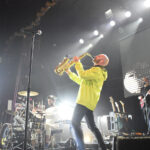 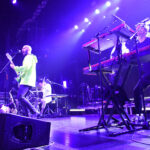 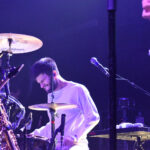