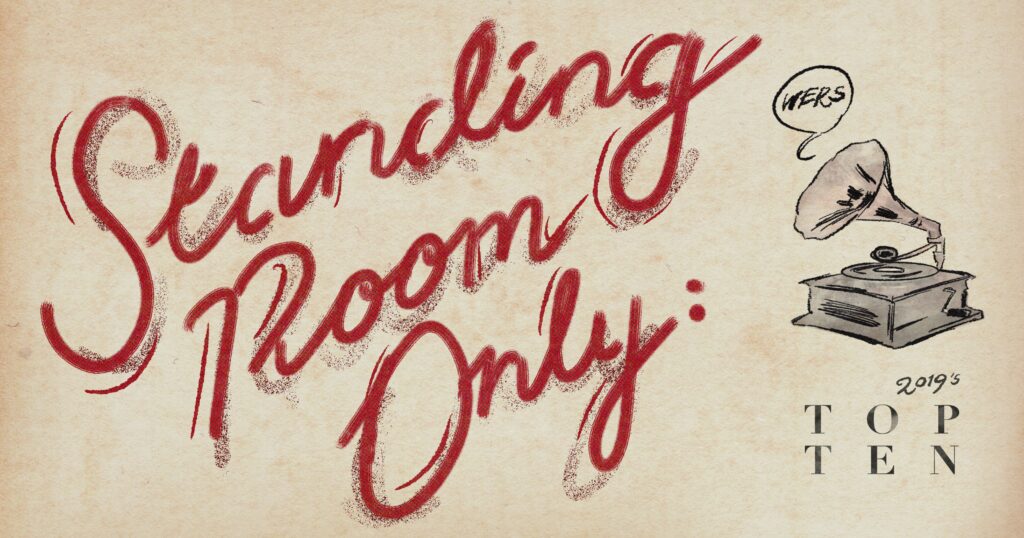 As 2019 comes to a close, we here at 88.9 are taking a look back at some of our favorite tunes of this year. Every Monday in the month of December, some of your WERS faves are going to be counting down the songs they had on repeat. For this next installment of Year in Review (YIR), we're hearing from the "cast" of Standing Room Only, 88.9's show-tunes only program, which you can tune into on Saturdays from 10 a.m.-2 p.m., and Sundays from noon-2 p.m. Here's what the hosts of SRO had to say about their top ten show tunes of the year!

By The Cast of Standing Room Only

Ah! The theater! Every year brings a new round of revivals, tours, and openings off-broadway. On Standing Room Only, our intrepid team does their best to play them all, but there are a few (Hadestown) that are destined for eternity. Here are some of our hosts' favorite numbers they'd like to see enter the musical theater canon:

The song is a microcosm of the entire show, on top of having a strikingly new voice in the Broadway scene: Anais Mitchell. It sounds both very mechanical and yet classic. It's familiar enough to be an earworm, and yet "out-there" enough to bring something unique to the party. Both the Concept album and Broadway bring something different to the song. The Broadway version is more polished and audience-appealing, but the concept feels dirty and gritty in a way only a live album can. -Alex Laplante, Host of SRO on Saturdays

The sitar opening got me hooked from the beginning. There's an almost magical quality to the song that can only be felt at this point in the show. On top of the sound, the lyrics are relentlessly clever with the almost saying his name three times (i.e. "Beetlejuice, Beetlejuice, being young and beautiful"). It reminds me a lot of the song "Nobody Cares" from Groundhog Day, in that the show may have some growing pains, but that one song is fantastic. -Alex Laplante, Host of SRO on Saturdays

Daniel Fish's controversial, radical, and electric reimagining of Oklahoma! has had a long journey to Broadway, somewhere they never expected to go. This rendition of "People Will Say We're In Love" retains the original qualities of a simply beautiful, classic love song while adding that twist of contemporary twang that this production is known for. -Olivia Ek, Host of SRO on Sundays

If American Utopia was a manifesto, "Road to Nowhere" is its thesis statement. David Byrne and the creative team breathed new life into many of the most classic Talking Heads songs, all with a unifying theme of kindness and resilience. "Road to Nowhere" is the optimistic encore ensuring the audience that we are all on the right path (to nowhere). -Olivia Ek, Host of SRO on Sundays

Although this song did not technically come from a real musical, Documentary Now's parody of Company, Co-op, was a musical highlight of 2019. Using the footage from the recording of the 1970 original Broadway cast album, John Mulaney and Seth Meyers put together a tribute to the Sondheim musical that is not only hilariously niche but lovingly detailed. -Olivia Ek, Host of SRO on Sundays

I love the way this show brings Tina's strength into the music. It's clear that this powerful anthem, which has been introduced to new audiences through musical theater is, for many, simply the best. This iconic number will resonate with audiences for generations to come. -Molly Shaughnessy, Alternate Host

Musical theatre has a way of entertaining and engaging audiences of all ages. I relish Broadway's effort to balance spectacle with the content on the stage. Such is the case in the tony-award winning musical Hadestown. The show has a glorious set and features an array of compelling music, an example of which is the song "Wait for Me." The number portrays the characters' willingness to beat the odds set against them as the full company comes together in a powerful display of passion. -Kaitlin Phelan, SRO Music Team Member

Out of all the musicals that premiered on Broadway this year, Hadestown has truly stood out to me the most. All three epics that Orpheus sings are so beautiful and poetic, and the rest of the show is beautifully written as well! The musical has gained a lot of popularity within the last year, and I know that people will continue to talk about it for years to come. -Brenna Epstein, SRO Music Team Member

Yes, this fabulous adaptation of Alanis Morrisette premiered in Cambridge in 2018, but the cast recording JUST came out. There's a lot of noise made about rock and roll musicals-how they never have the same energy as an actual rock album, that they don't get the arrangements right, that having a guitar on Broadway feels like a cliche and not an innovation anymore. Well… this show isn't that. The source material is powerful, and the arrangements bring Alanis's music to a new level of expansiveness, rather than bogging them down. -Phil Jones, SRO Understudy

Add this show to the canon of great high school musicals. Like The Prom, Heathers, and arguably Grease, Be More Chill thrives by giving its teenage characters the expressive range normally reserved for adults on stage. It's no surprise that the teen-centered musical is gaining traction; there's a limitless supply of drama. Be More Chill stands out for braving the scary narrative waters of merging our minds with machines. It could easily be over serious with such a heavy theme, but the show is… silly. Serious fun, we'll call it. We could use more. -Phil Jones, SRO Understudy

Best of ‘ERS: A Year In Review