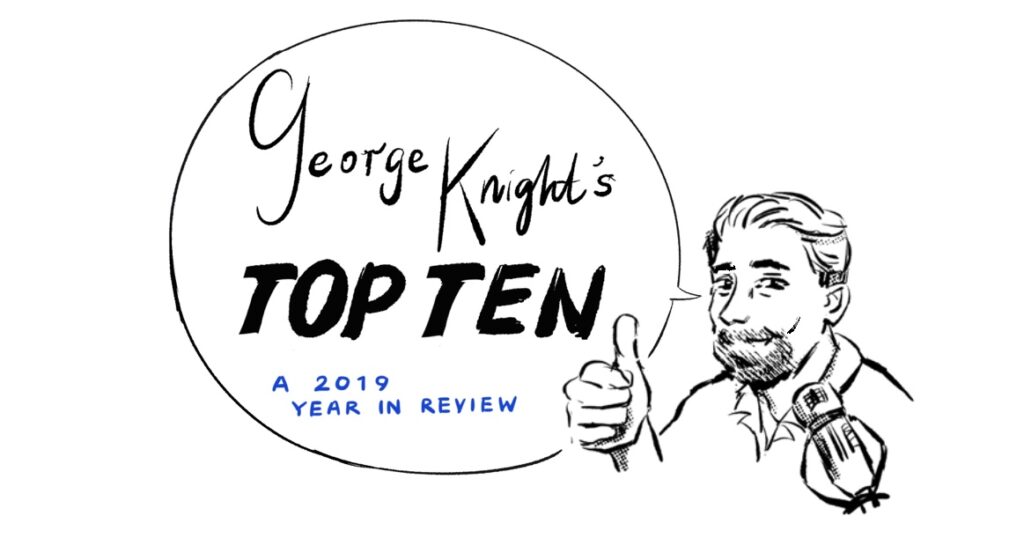 As 2019 comes to a close, we here at 88.9 are taking a look back at some of our favorite tunes of this year. Every Monday in the month of December, some of your WERS faves are going to be counting down the songs they had on repeat. For this next installment of Year in Review (YIR), we're hearing from Boston's favorite morning host, George Knight! You can tune into his show weekday mornings from 6-10 a.m. Here's what George had to say about his top ten jams of the year!

It's really hard for someone like me to pick just ten favorite songs from 2019, because I have the ability to find something enjoyable in most forms of music (though perhaps not ALL). I've given it a shot… and because giving them a rank proved to be too daunting a task, I present them to you in no particular order.

It was nice to have Tame Impala (aka Kevin Parker) back on the scene. I have admiration for one-man bands like Tame Impala, especially when they really don't sound like they were just done by one person holed up in a music studio. Tame Impala music has life, and you typically get a nice wide variety of interesting sounds. This one has heavy old school drums, wailing synthesizers weaving in and out, and that great Kevin Parker voice, which I still maintain has a John Lennon quality to it. This song will be part of an album due out in 2020. Very excited to see what else he's got.

"The Chain" by The Highwomen

First time I heard this, I thought what others thought: It wasn't much of a departure from the original. Then I really listened to it, and stuff started popping out at me, like the fact that the harmonies are all female voices, as opposed to the male/female hybrid on the Fleetwood Mac version. And OH, what voices they are! Brandi Carlile, Amanda Shires, Maren Morris, and Natalie Hemby sound awesome together. I also love the backstory on the band's name, paying homage to legendary Country Outlaw band The Highwaymen.

"Light On" by Maggie Rogers

I'll admit that I was one of those who listened to Maggie's debut song "Alaska" and enjoyed it, but also wondered what would come next from Maggie. Would it be more of the same? Would she go off in a completely new direction? Turns out it's somewhere in the middle. This song has some distinct Maggie Rogers-isms, like that cool little yodel thing she does with her voice, and the very slick production she does so well, but I feel it's really not just Alaska Mk. II. This song moves right along, and I love the combo of her sweet-sounding voice and powerful electronic sounds.

The volume knob gets turned up when this band comes on the radio. They got started in Fullerton, California-the same place that gave birth to the Fender Stratocaster-and this year came out with their seventh album. "Complainer" is a great song to have playing loud on the car radio. It's got a nice, steady, funky drum beat and bassline running throughout, and really interesting vocals that-at certain points-make it sound like they hired a children's chorus (turns out it's just grown-ups going for a kids sound). It's got a fun vibe. And a message.

Steve Lacy is an interesting guy. He hails from Compton, the same area of LA that gave us Dr. Dre and Keb' Mo'. He's the guitarist for The Internet, and you can also hear his great guitar work on a couple of tunes from the latest Vampire Weekend album. This song is from his debut solo album, and it is a really interesting tune that features falsetto vocals over a very funky backing. If you're into '70s & '80s funk, this one will make you happy.

I must acknowledge that Phil had this on HIS list, too, but I couldn't keep it off my top ten. I LOVE the vibe of this song, and the combo of those amazing voices singing over old school drums, stand-up bass, and saxophone. It always reminds me of "Walk on the Wild Side" with that laidback, funky warmth. I'd be willing to bet a big sum of cash they were inspired by Lou Reed for this one. It's not just for summer.

You can say there's a bit of bias in this pick, given that Nick played our 70th birthday party and also visited the morning show. That may be true, but I'm okay with that, because this is just a great song. A fine example of a catchy, well-crafted bop that gets in your head and doesn't leave. Got some nice twang to it, thanks to Los Straightjackets, who back him up on this one.

This woman is only 22 years old and has already put out three albums. Her latest tune, "Lucy", is a nice, guitar-heavy showcase of her voice. Sophie Allison was born in Switzerland and grew up in Nashville. There's something in the water in Nashville that gives that town its vibe, and it has affected Soccer Mommy's music in a very musical way.

"Baptise Me" by Robert Randolph & The Family Band

I'm loving the latest from a group that IMHO is one of the most underrated bands around. Robert Randolph's instrument of choice is the pedal steel guitar, but when he's playing it sounds less like a staple of Hawaiian and Country Western music, and more like Jimi Hendrix on his Stratocaster. The band's latest is a typical high energy, bluesy rocky jam. BTW-this is a band you NEED to see live.

It had been a while since we had new music from Saint Motel, and in 2019 they came out with a collection titled The Original Motion Picture Soundtrack Part 1. Not sure if or when we'll see part 2, but for now I've been enjoying the up-tempo, horn-heavy song "Van Horn." It's got that trademark Saint Motel sound, meaning if you liked "My Type," you'll probably enjoy this one, too.

Tune in next Monday, when we hear from the WERS Music Team about their top ten picks for the year!

Best of ‘ERS: A Year In Review