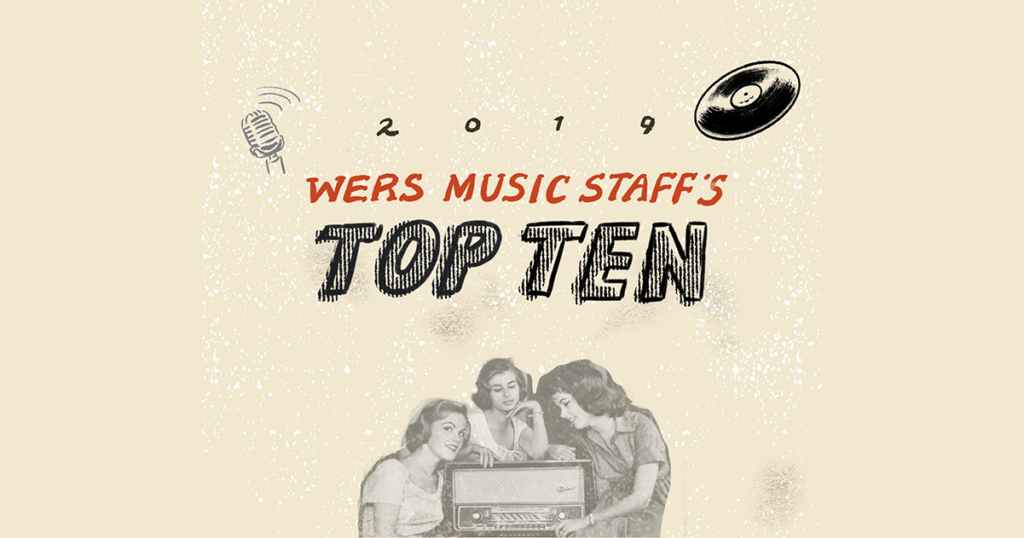 By the WERS Music Staff

It's been another year full of great music, and now it's time for us at 88.9 to try to condense 2019's best into 10-song lists. The last installment of our year-end roundup comes from the WERS music staff, who have been keeping up with the best new music all year long. Narrowing it down wasn't easy, but here are a few of our favorites from a jam-packed 2019. -Owen Murray, Music Coordinator

Since September, HAIM has released three new singles, hinting to excited fans that more music is on the way. Of the three, my favorite so far has been "Hallelujah". This song is about "Family, love, loss, and being thankful for it all," Alana Haim said on Twitter. The group HAIM is comprised of three sisters, thus making this song even more meaningful for the indie group. Having an older sister myself, I found a strong connection with this stripped-down piece. The song takes on a backyard country vibe, focusing on the sisters' voices accompanied by guitar. In a world full of hate, breakups, war, and corruption, "Hallelujah" transports us away from all of that, reminding us that we have so many amazing people in our lives that are often taken for granted. Lyrics such as "I met two angels but they were in disguise" and the chorus of "Why me? How'd I get this hallelujah?" warm our hearts with how much relationships, especially sisters, mean to us. As long as I listen to this song, I will remember to count the hallelujahs in my life.  -Claire Kong

Lana del Rey is the queen of dreamy vocals and enchanting lyrics. Her song "California" off of her album Norman F***ing Rockwell combines the California hospitality with an intimate relationship. Her lyrics capture the beauty of being an unwavering support for someone who is not doing as well as they're expected to. The song is sprinkled with references to California such as her mention of the Santa Ana's infamous winds. Rey took direct inspiration from Joni Mitchell's 1971 "California," particularly in the call and response of the Mitchells's "then I'm coming home to California…will you take me as I am, strung out on another man?" to Lana's "If you come back to California, you should just hit me up / we'll do whatever you want, travel wherever how far." "California" contributes beautifully to the album as a whole, using soft harmonies to answer difficult questions. -Claire Kong

Steve Lacy is known for his guitar skills and smooth voice, and he really puts them to the test in this song off his first studio album Apollo XXI. I've loved this song ever since it came out, and it has completely transcended seasons for me. It's the perfect song to drive in the summer to, windows down on the highway, but also suits a cold winter day when you just need something to help you avoid seasonal depression. Easily one of the best songs to come out this year from one of the best debut albums of the last few years. -Max Feld

In this stunning breakup song, FKA Twigs does what she does best: makes you feel like shit in the best way possible. Cellophane is the perfect song to cry to, letting the song do most of the emotional work. I'm not saying I've done it, but I'm also definitely not saying that I haven't. I also can't help but appreciate the artistry and dedication behind the music video for the song, which FKA Twigs spent a year learning pole dancing for. If you haven't seen it, you need to immediately. However, don't stop at listening to just this song, but please listen to the entirety of the masterpiece that is Magdalene. You'll thank me later. -Max Feld

"Habit" by Still Woozy illustrates a story of uncertainty towards a love interest's true feelings. Plagued by insecurity and exposed to rejection, this song instigates a heavy sense of inner conflict and catastrophizes the result. Woozy's use of the word "habit" in this track is an indication of the stability he craves from the person receiving his affection. Through the contrast of the song's chaotic, uncertain lyrics and its melodic, seductive beat, Gamsky charmingly feeds us his turmoil. The cultural rise of Still Woozy along with the success of the masterpiece that is "Habit" makes this track one of my favorite songs of 2019. -Grace Crain

In 2019 Big Thief released U.F.O.F and Two Hands; twin albums that were both met with overwhelming acclaim. One of the best songs to come out of their creative hot streak was "Not," the emotionally raw lead single from Two Hands. The song's grounded, rock sound instantly showed a contrast to U.F.O.F's ethereal energy and proved that Big Theif doesn't have to rely on effects to make absolutely gorgeous music. With Adrianne Lencker's desperate vocals and the extended, noisy guitar solo on the second half of the song, "Not" is a perfect example of how Big Thief took us to new emotional heights this year. -Owen Murray

As his unconventional name suggests, (Sandy) Alex G's music is very quirky, and just a little obtuse. This shined through more than every on his 2019 album House of Sugar where he manages to create a shimmering world of sound mixing folk, country, and indie influences. The best introduction to this world is perhaps "Southern Sky." With an unforgettable, ear-worm piano intro and playful violin and vocal melodies, the song shows Alex G's off-beat style at it's very best. -Owen Murray

Weyes Blood's fourth album Titanic Rising is her grandest to date. The album's intro "A Lot's Gonna Change" is both sentimental and filled with existential dread as Weyes Blood longs to return to a time of youth and secutiry while looking ahead at immenent changes to our chaotic world. But "A Lot's Gonna Change" is not a song of dispair, but empowerment in the face of overwhelming adversity. "'Cause you've got what it takes, in your lifetime" she sings over sweeping strings, in a powerful falsetto. "A Lot's Gonna Change" is a gorgeous introduction to one of 2019's most beautiful and cinematic albums. -Owen Murray

Releasing a song in January that sounds like dancing in the summer sun could be considered a risk, but this year Hozier did just that and still managed to bring that song to our brightened living rooms and windows-down car rides come July. Through a plethora of Jazz references it highlights the influence music can have on a romance and it's demise. (Almost) Sweet Music is bright, filled with sounds of love and excitement while also lyrically reflecting on the complexity of changing relationships and the emotional uncertainty of moving on. It is an anthem that celebrates embracing change, growth, and taking risks in the name of finding something better than an "Almost." -Kayla Goodale

Sometimes a song is an organized way to scream at the world, and I would say this one fits the bill. British Bombs is deceiving, and if you're not paying attention at first you can fall into its fun rhythm without being confronted with the very blatant political message. When you arrive at the bridge it's made abundantly clear; the British government (and the United States, for that matter) is comfortable funneling bombs into the proxy war in Yemen without the recognition that they are participating in and furthering a humanitarian crisis and Declan McKenna is sick and tired of it. He also confronts the concept of wartime, "and getting so much worse / get real, kid, your country's been at war since birth" through the acknowledgment that many young people across the world have never known peacetime. It's a song that is daring you to confront the realities of the world we live in and asking you to continue to raise your voice in outrage because it's better than being silent. It's a song to be shouted from the rooftops, and its musical progression fits that perfectly. -Kayla Goodale