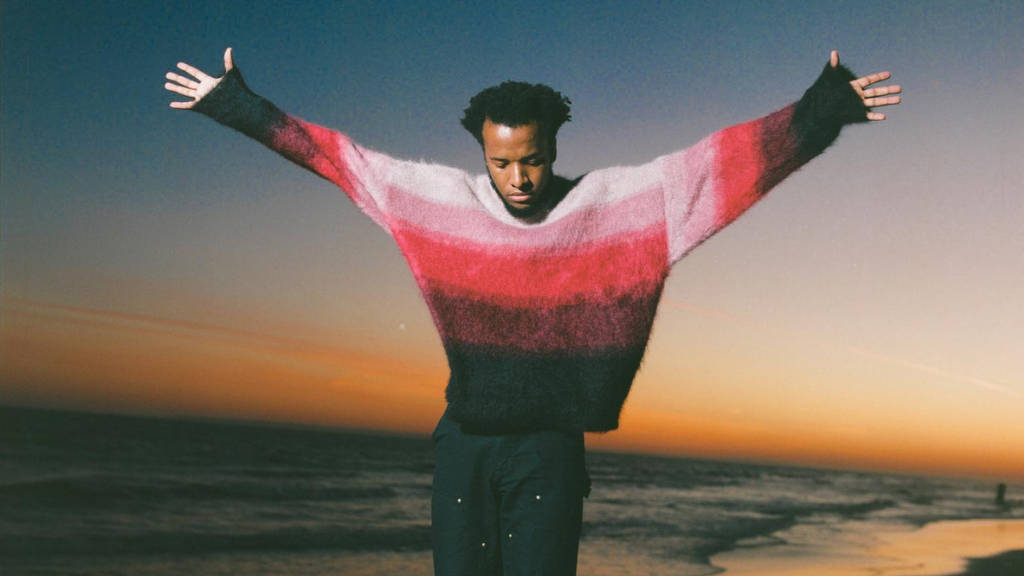 R&B singer and multi-instrumentalist Joshua Karpeh, known by the stage name Cautious Clay, has made a name for himself with his multiple EPs, collaborations, and musical projects. Now, he's getting ready to release his debut full length album Deadpan Love. WERS Music coordinator Tatum Jenkins recently chatted with Cautious Clay about some of her favorite tracks and got the scoop on the upcoming release.

I FEEL LIKE THERE ARE SO MANY ARTISTS NOW THAT GET THEIR CAREERS LAUNCHED FROM ONE SONG. AND THAT WAS "COLD WAR" FOR YOU, OBVIOUSLY. WAS IT SORT OF JARRING FOR YOU TO GO FROM HAVING A NORMAL JOB TO THEN YOUR MUSIC BLOWING UP AND BECOMING A MUSICIAN?

Cautious Clay: Yeah, I mean, somewhat. I feel like now it sort of is so familiar to me, being in this scenario of kind of like a musician and artist in multidisciplinary kind of ways. And I mean, at first it was definitely kind of like, 'whoa,' you know.

I LOVE YOUR FIRST EP BLOOD TYPE AND NOW I'VE LISTENED TO YOUR NEW SINGLES. HOW HAVE YOU NOTICED YOUR SOUND OR SONGWRITING EVOLVE SINCE BLOOD TYPE? I FEEL LIKE THEY'RE CONNECTED SONICALLY, BUT DIFFERENT ENOUGH TO WHERE THEY SHOW YOUR GROWTH AS AN ARTIST.

CC: I wanted to reference certain sound palettes in this album. I feel like it's sort of split in between two kinds of sound palettes. Soft rock elements to a little more like R&B, classic R&B. Those are like my two places that I wanted to explore with this album. I was conscious of it, I was very excited to sort of take a stab at that in sort of a modern sense, you know? I wanted to make music that felt modern, but also sort of reverent of amazing music of the past.

IS THERE ANYTHING, IN PARTICULAR, YOU LEARNED ABOUT YOURSELF OR MAKING MUSIC WHILE WORKING ON DEADPAN LOVE THAT SURPRISED YOU?

CC: I think I just had fun trying out new ways of recording myself. I've been doing a lot more vocal layering on the main vocal songs like "Dying in the Subtlety" or on [one of] the [songs] on the album "Box of Bones." I have sort of this main vocal that's just stacked 20 times.

I think I was pushing myself vocally on this album and trying to see how far I could extend it. And that was sort of a new process for me, coming out of more focus on production elements. I was more focused on vocal production with this album than with other EPS or projects I'd released before.

WE CURRENTLY PLAY YOUR SONG "ROOTS" AND IT SOUNDS AWESOME! I WOULD LOVE TO KNOW HOW YOU CAME ABOUT CREATING THAT SONG. DID YOU HAVE ANYTHING IN MIND WHEN YOU WROTE IT?

CC: I felt like the beat was so nostalgic. And I love rhythm. It feels like a perfect mix of a ballad and then also like a heavy kind of drum percussion. I love both of those things a lot, so I wanted to find that balance. I think when I heard that, I was like, "Wow, this is cool." And I wanted to just challenge myself to make a ballad, but then also kind of make a sort of groove-type song as well. So it was nothing really more than that. It was sort of me realizing that and being like, 'Oh, cool, I have this, I could sort of do this in an interesting way.'

The drums are really dusty and sort of heavy, but then the chords are soft and warm. I just wanted to write a song over top of that. But "Roots" was originally something totally different, so I actually repurposed that song. It actually took a new form, which is how people hear it today.

I CAN DEFINITELY TELL WITH THE SINGLES YOU'VE COME OUT WITH, THERE'S ALMOST LIKE A MORE PLAYFUL ELEMENT. I FEEL LIKE BLOOD TYPE WAS VERY SONICALLY COHESIVE - IT ALL CAME TOGETHER. BUT I LIKE THAT WITH EVERY SINGLE I'M LIKE, "OH, WHAT'S GOING TO HAPPEN NEXT?" IS THAT HOW IT FELT FOR YOU MAKING DEADPAN LOVE?

CC: Yeah, totally. Making this album, I feel like I wanted to make it a more cohesive statement then my past EPs. Not that they weren't cohesive, but I think I thought a lot about the track order. And it's obviously 14 songs as opposed to eight songs; it's a longer project. So I wanted to think about how to make it feel almost like a playlist and sort of how you're supposed to listen to it in this order specifically.

From "High Risk Travel" all the way to "Bump Stock," I feel like my goal was to really just have the listener experience all the elements of what I was feeling over the past year.

WAS THERE ANY SORT OF MESSAGE YOU HAD IN MIND OR ARE YOU GOING INTO IT JUST LIKE, 'THIS IS MY YEAR AND THIS IS WHAT IT IS?'

CC: I don't know, I feel like I try super hard to just express myself through my music. I think my message is really just how important relationships are, in whatever form they're taking. I think we're nothing without the relationships that we build with the people around us. And also just protecting that and realizing that you can be an earnest person and it's still cool or whatever.

I feel like the whole idea of people feeling like, "Oh, I can't try, I don't want to look like I'm trying," it's like whack to me. I would rather try, personally, because that's all you're living for, right? And I think the message overall is just this awareness of like, 'hey, everything kind of sucks, but also let's try to do something about it.'

"Deadpan" is like the wittiness, the sort of snarkiness. And then "love" is the empathy, the earnest kind of mentality. And I think that's just who I am as a person, so I felt like it was an appropriate title.

DID THE TITLE "DEADPAN LOVE" COME TO YOU, WAS IT SOMETHING THAT SOMEONE SAID? I'M CURIOUS IF THERE'S ANY SORT OF BACK STORY.

CC: Yeah, so to be honest, it sort of just came to me. I looked it up on Google before it came out and the only other thing that had that two-word phrase together was some random Teen Wolf fanfiction or an anime or something like that. It wasn't even in English. So I was like, this is cool, there aren't many uses of these two words together and I can make it make sense. So I really liked the idea of making that my album title. It was originally going to be Karma & Friends, but I changed it.

ARE YOU EXCITED TO TOUR AND DO YOU PLAN ON TOURING? IS THERE ANYWHERE, IN PARTICULAR, YOU'RE EXCITED TO GO?

CC: Yeah, I'm definitely planning a tour. I'm excited to go everywhere! I'm excited to just get back together with my band. We're doing a bunch of rehearsals, so it should be great.

WHICH OF THE SINGLES YOU'VE RELEASED SO FAR IS YOUR FAVORITE? I KNOW THAT CAN CHANGE ALL THE TIME. I'M PERSONALLY A HUGE FAN OF "WILDFIRE," I LISTEN TO IT ALL THE TIME!

CC: I mean it's always changing for sure. I feel like it was "Roots," but I think "Dying in the Subtlety" is my favorite just because the drumbeat is so interesting and it was fun to make. It's fun to play live, too.

WLW Interview: Erin and Charles Vadala and the Creative Process