WLW Interview: Erin and Charles Vadala and the Creative Process 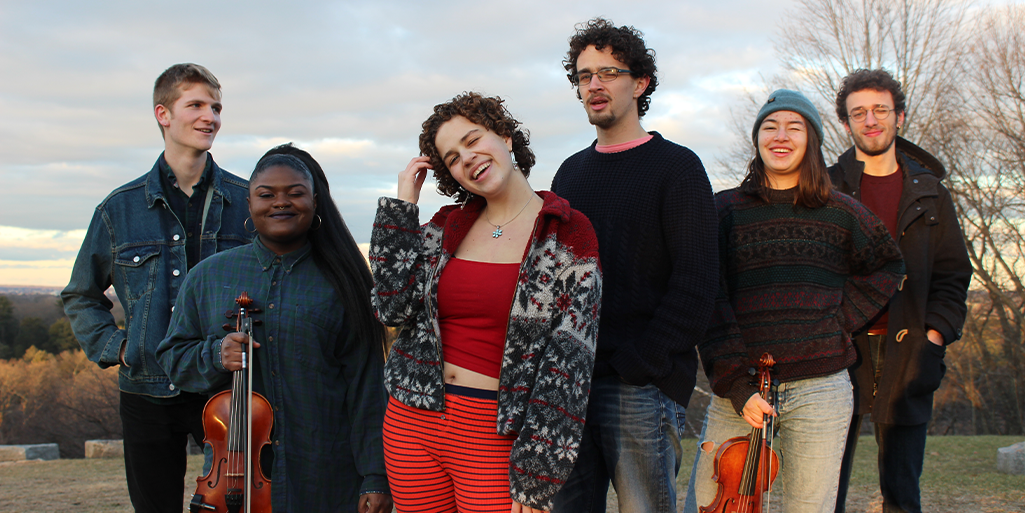 Although live mixes here at 88.9 are indefinitely canceled due to the outbreak of COVID-19, we're not stopping Wicked Local Wednesday (WLW), our weekly program dedicated to bringing you music and interviews with artists in the Boston/New England area. Tune in at 9 pm every Wednesday night to hear two songs each by two local artists!

To learn more about the artists you hear on WLW, check out our WERS Music Blog for interviews with them! In this interview, local siblings Erin and Charles Vadala spoke to WERS Blog Editor Lily Doolin about the origins of their project (Erin Vadala and Her Brother Charles and Their Band), and how the creation of their album Tell Me I'm Wrong brought their complicated yet effective creative process to life.

Check out our past WLW interviews here!

I wanted to start off with how you guys got started. Erin, it sounds like you started this as a bit of a solo project, and then your brother came on; how did that all come together into this larger project?

Erin Vadala: Well, I think the reason it started as a solo project is that I started writing when I was really young. I was like, twelve years old when I was writing my first songs and it was like a private thing as it started, and I was too young to think of it as the way you might think of releasing music as an adult and performing, because it just didn't strike me that way. So, as I got older and I was playing with my brother at school and in the house, I guess the lines started to blur and we started to play my music together. We started to get more and more interested in doing that together.

Charles Vadala: A funny part at the beginning was we got offered to play at Jamaica Plain Porchfest in 2017, and we did not have a band but we committed; we said, "Okay, we'll perform and we'll do an hour-and-a-half set." So, we committed ourselves to performing for an hour and a half, and that was a very good part of the motivator, to prepare an hour-and-a-half set with a full band, and that got it rolling. It forced it to get rolling.

EV: Yeah, basically I just had all this music that I had written for myself that - I'm not very good at piano - but I would play it on piano to write it and we were like, "Okay, we could actually have a project with this, we could play this for other people, and the way to make it sound the best is to work together." So, typically with our music I'll write the composition, like the chords, the lyrics, and the melody, and then Charles will do the arrangement. We have two violinists and a whole rhythm section, so being able to bring that music to him and then to them, to me it feels so powerful because they add so much to the music.

Yeah, absolutely, and I understand now the very extended band name! I wanted to hear more about where you guys draw inspiration. In your life, do you find inspiration for not just the lyrics for your songs, but for the musical arrangements, and what brings you guys to the table to start creating your music?

Also, I would say that we've been really lucky because throughout high school we both were part of a music program called City Music Boston, and we learned a lot about music theory, and playing and expressing ourselves in a way that's authentic but where we can draw from education.

One other thing is that, more recently, the next project that we're working on that we're going to record is a project that's music that I wrote from when I was at school, my first year at college, and it's really specific, experience-based. Each song on the album is a name of [a person] that [was] significant at my school, and about the experiences with people.

CV: And just to add to that, because Erin's writing the songs, I think a lot of my inspiration for arranging and for playing comes from Erin's compositions, and trying to understand what she's trying to convey, then conveying it. And then I guess I like to think I get a lot of inspiration from the audience when I'm performing, trying to build off their energy and connect with them, so I think those are two big ones for me.

Just last year, you released this album, Tell Me I'm Wrong, and I guess I wanted to know from that album, if there was a song either of you, both of you, or just one of you found to be a learning experience; either it taught you something about yourself, or it taught you something musically that you never knew or never thought about before. Is there a song for you on that album that really speaks to you in that way?

CV: That's a very interesting question. For me a specific song doesn't come to mind, as much as I think that it was the first album that we participated in creating from beginning to end. I think making the album as a whole taught me a lot about working together and accepting ideas from everyone. So, Erin has ideas, I'll do the arranging, but then the violinists know more about playing violin than we do, the recording engineer knows his part, so I think it taught me a lot about instead of being like, "Oh, this is my idea, this is my album, I'm gonna make it," it taught me a lot about valuing other people's ideas as contributions to the project.

EV: And to add to that, actually, with one specific song, I have a very clear memory of one of the songs we played on the radio for you guys, "Three Questions." We had two days in the studio, one after another, and on the first day, we played the rhythm section, we recorded the rhythm section and vocals for that song. Then that night, we came home and we listened to what we had so far, and I remember saying to the group, "I feel like this is missing something, I feel like it could have a violin line." So, I sort of said some random idea, and then our guitarist was like, "Oh, and then I can respond to that idea with this." Then he's saying an idea back, and the two violinists took those ideas and kind of adjusted them a little bit to fit what they wanted to play, and then Charles was like, "Oh, and we could add this synth here." Then I was like, "Oh, and we can record these harmonies," and I just remember the way the pieces came together. It was like another emotional expression to be a part of the creation process together as a unit.

I know this is a really uncertain time, obviously, but what are you guys doing to sort of keep the light on with your project? Are you taking this time to work on that album you were talking about, are you taking a break?

EV: Well, we're lucky because we live together (laughs), so we don't see the rest of our band, but Charles and I are together, and we have a few things that we're able to do right now, just to keep things going. I think with the upcoming album that we want to release, we're working on getting comfortable with playing it together and how to add the musicians, because that's always a really important part of the process for us - To translate it from what I was picturing in my head, what I had done by myself, and how to be comfortable playing that with Charles and the rest of the band. So, we don't have specific plans - I don't think we're able to have specific plans for when to record that yet - but we are getting comfortable enough with it so that we'll be ready to once we're able to plan.

Are you a local artist interested in having your music played on 88.9? Submit your music here, or email us at aaamc@wers.org.

Due to widespread event cancellations, music makers are struggling. With media support from WERS, The Record Company has established a fund to provide financial relief to Boston area music makers due to COVID-19. To learn more about the fund and apply or donate, please visit therecordco.org/covid-19