What a kickoff! The first day of Boston Calling exceeded expectations across the board. The new location at the Harvard Athletic Complex was simply mind blowing and every performance was a can’t-miss spectacle. 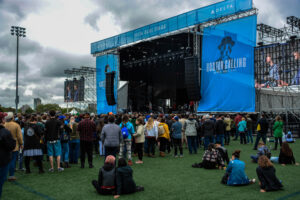 Our day started with Car Seat Headrest, an up-and-coming indie rock band from Virginia. While their crowd size started small, the four piece’s impressive blend of garage rock guitar tone and up-tempo rhythm drew thousands of festival-goers, many of whom were discovering the band for the very first time. By the end of their set, Car Seat Headrest had the entire Boston Calling crowd jumping and head banging along to songs off their latest album Teens of Denial. 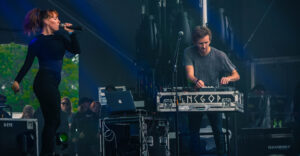 Right after Car Seat Headrest was finished tearing up the stage, we ran across the festival to see a WERS Favorite, Sylvan Esso. The electric-pop duo from North Carolina are still new to the festival scene but looked right at home on the Boston Calling Stage. Despite there only being two members in the group, one of whom is stuck behind a series of laptops and turntables, vocalist Amelia Meath had no trouble taking up the whole stage with her phenomenal energy and soaring voice. Their crowd stretched back as far as the eye could see, and at times the ecstatic fans sang along so loud that it drowned out the music from the stage. 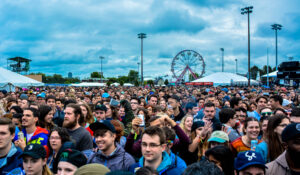 The highlight of day 1 was the headlining performance from Wisconsin’s Bon Iver. Fresh off a Grammy nomination for Best Alternative Album, the experimental group captivated thousands of fans as the sun set on a rainy afternoon. The weather had mostly cleared up since a wet start to the day, but there was a very special moment during Bon Iver’s set. Just has the group closed out one of their more experimental and production-heavy tracks off their album 22, A Million, they transitioned into their breakout 2007 song “Skinny Love.” As the acoustic guitar and somber voice echoed over the crowd, a light rainfall began to fall over Boston Calling. The gentle rain perfectly mirrored the hushed tranquility of the thousands of fans while front man Justin Vernon sang the song that first put Bon Iver on the map a decade ago. The moment felt even too perfect to be out of a Hollywood script. As the set continued, and their energy built towards their final song, the rain kept falling harder and harder. Just minutes after Bon Iver left the stage, the rain stopped falling and Boston Calling fans returned home to dry off and rest up for what is sure to be an amazing Day 2.

Looking ahead to Saturday, the amazing acts just keep coming. We’ll be keeping our eye on Strand of Oaks, The 1975, Nathaniel Rateliff & The Night Sweats, and more! Check out WERS’s Facebook, Instagram, and Twitter for more behind the scenes look from Boston Calling