Ball in the House: An A Cappella Juneteenth 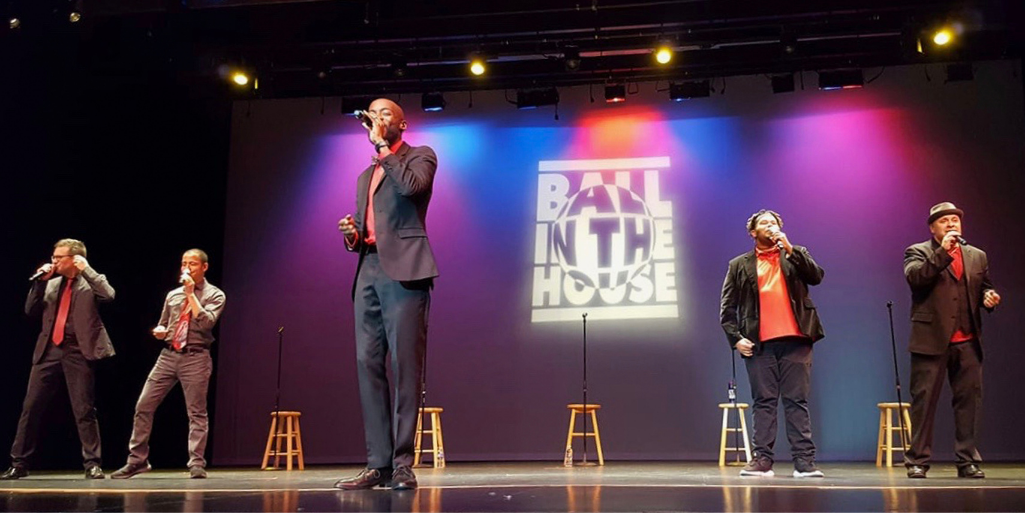 Photo courtesy of Ball in the House

Ball in the House is one of Boston's longest-running A Cappella groups, performing since the late '90s. Monty, Wallace, Jonny, Kevin and Dave will perform live on WERS for the first time in over a year on Juneteenth - Saturday, June 19th - singing material that covers a range of Black musical history, and both celebrates Black artists and teaches some of the history behind the holiday. Ahead of the performance, they caught up with afternoon host Phil Jones:

YOU GUYS HAVE BEEN BUSY PERFORMING AGAIN! WHAT'S GOING ON?

Dave Guisti: Well after the shutdown we cancelled a midwest tour, and all these arts and education shows. So we were brainstorming what to do and approached Wilmington Cable, who used to film a lot of our school performances and said 'hey, would you be interested in hosting our virtual program' and they said 'yeah!'. I don't know how many we've done but it's been a lot. Slowly now, things are opening up again and we're booking some outdoor shows. We've been blessed!

HOW LONG HAVE YOU GUYS BEEN ABLE TO PERFORM TOGETHER?

Wallace Thomas: We haven't been able to be in a bubble, but we can take on a bubble mindset. So I see my family, and that's it. We've been able to rehearse, and now that everyone in the group is vaccinated we can get back to the studio.

DG: Though for a band that was doing 200 shows a year, we did go from March 2020 til about November without seeing each other.

WHAT DO YOU GUYS DO FOR DAY JOBS?

DG: We're full-time! We write, arrange and do the business.

Jon Ryan: Well, Kevin's a substitute teacher, but when we have a gig he says "I can't make it today!".

I'D LIKE YOU TO IMAGINE FOR A MOMENT THAT IT'S 2023. COVID IS TOTALLY GONE, AND THERE'S NO LIMIT TO YOUR BUDGET. WHAT'S YOUR DREAM PROJECT? WHAT WOULD YOU BE WORKING ON?

JR: Even though you can reach more people with recording, there's something to an A Cappella group that needs performing. I find that shows that involve the audience a lot, where they participate, and talk about music are better. If we can do some education, teach anti-racism, the history of Black music in America, the historic connection to A Cappella music in American history. I'd love to do a show of the stuff we find interesting and make it really interesting to an audience.

Monty Hall: Honestly, my dream is to record full-length, all originals with Timbaland.

WT: You will never meet a bigger fan of Beyoncé than this man.

MH: She gets a feature! But I want Timbaland to produce.

WHAT'S ONE THING PEOPLE DON'T ALWAYS KNOW ABOUT A CAPPELLA AND THE MEDIUM THAT THEY SHOULD?

WT: Not just in A Cappella, but across all American music…. There is no American music without Black people. Pick your medium, from Big Mama Thornton to early doo-wop groups, African-Americans were there. Then, through cover songs, or what have you, the songs get used without giving people the credit they deserve. Now more people are learning, I'm learning.

DG: One thing I focus on too, is spirituals. Enslaved people, they needed A Cappella to get through every second of every day. They sang to get through. We learn that each time we do a show, that music hits you differently every day, and it really can be a lifeline.

JR: There's other styles too, country and folk music that have Black music at the root. Even Barbershop, which is a form of A Cappella and considered very white, began in Black barbershops. Some of the music winds up totally separate from its origins.

I WANTED TO THANK YOU FOR BUILDING THIS SPECIAL JUNETEENTH SET FOR US. WHAT SHOULD PEOPLE EXPECT?

MH: A celebration, with a message. A lot of Black artists, Stevie Wonder, Chaka Khan.

WT: We'll do old school and new school! We've given it a lot of thought.

I CAN'T WAIT TO HEAR IT! THANKS, GUYS, AND SEE YOU BACK IN THE ERS STUDIO SOON AS WE OPEN BACK UP!

You can hear Ball in the House's special Juneteenth performance by streaming or tuning into WERS 88.9 at 2 p.m. on Saturday, June 19th.