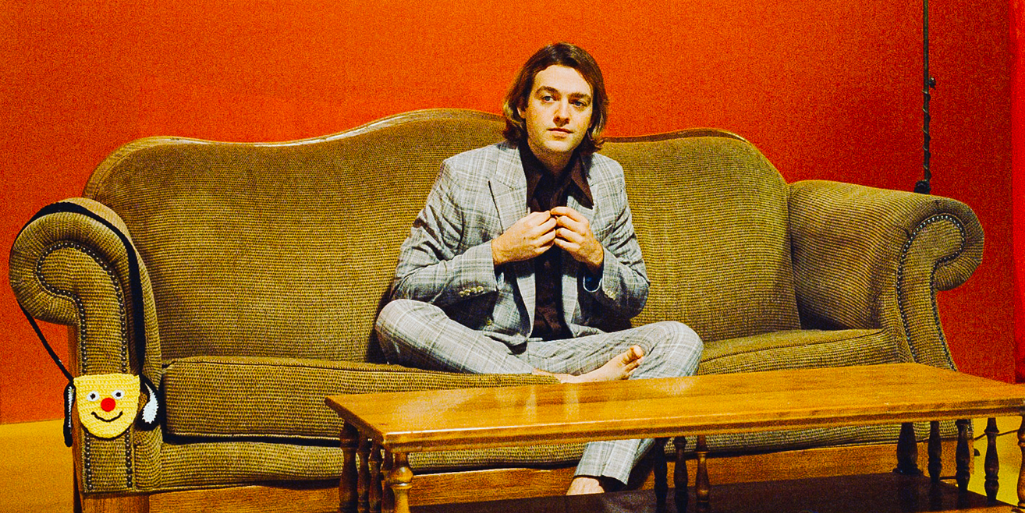 Aledo, Texas based pop artist Dayglow spent much of the pandemic perfecting his heavily anticipated sophomore album, Harmony House. Following the record's initial debut, staff writer Mason Standish sat down with bandleader Sloan Struble. Struble discussed his music's relation to his personal life, how he navigated quick success in the rapidly changing world of the internet, and more.

I'VE BEEN LISTENING THROUGH HARMONY HOUSE - CONGRATS ON YOUR RELEASE, IT'S A SUPER FUN ALBUM! IT JUST HAS A SUPER UNIQUE QUALITY AND VIBE TO IT THAT I FOUND FASCINATING. IF THERE'S ANY ROOM IN YOUR OWN HOUSE THAT YOU FEEL MATCHES THE ENERGY OF HARMONY HOUSE, COULD YOU TAP ME INTO WHICH THAT MIGHT BE?

SS: Yeah, I mean, this corner kind of works. I've got a Tascam Twenty-Two-Two tape recorder. We've got some art that I've made. I mean, I feel like this corner might be it. 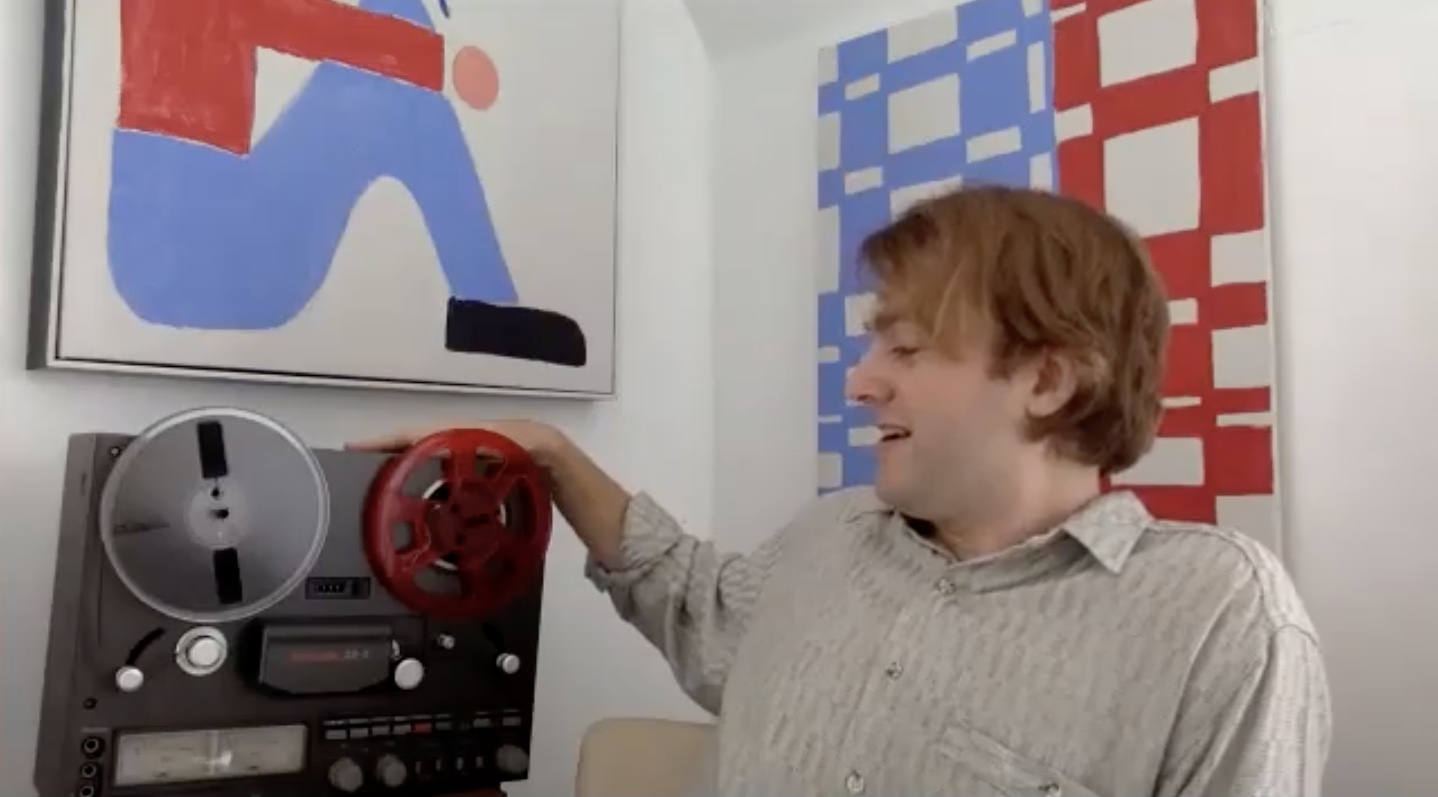 Struble points to the corner in reference. Photo courtesy of Dayglow.

SO THOSE ARE ALL ORIGINAL PAINTINGS BEHIND YOU?

LISTENING THROUGH HARMONY HOUSE WAS A SUPER REWARDING EXPERIENCE. I FELT THERE WAS A LOT OF LYRICAL COHESION THAT CARRIED THROUGH A LOT OF THE SONGS. I PICKED UP ON THEMES OF GROWING AND LEAVING. AND THE CONCEPT OF ENTERING AND EXITING DOORS WAS SUPER PREVALENT THROUGHOUT. DO THESE THEMES RING TRUE IN OUR OWN LIFE OR IS THERE A DEEPER NARRATIVE TO HARMONY HOUSE YOU COULD DELVE INTO?

SS: Yeah, I mean, you nailed it. Yeah, I've just been experiencing a lot of change. I mean, along with everyone else. There's just been a lot of big changes for everyone. But yeah, I think I like to think of things as vague metaphors and write in that way because it can be really applicable to a listener. Especially when dealing with something like change.

People are always changing. It's just what time does, it just changes. And I think I learned a lot about that while writing Harmony House. And yeah, I think I just focused on that as much as possible. And it helped me a lot because I kind of make music as therapy. And so hopefully it does the same thing for people listening.

DO YOU THINK YOU TAKE A SIMILAR ARTISTIC APPROACH TO WHEN YOU PAINT AS YOU DO WITH YOUR MUSIC?

SS: Maybe... I really don't paint as often. I just have never bought art or something. I don't really paint super often. I should more, but just getting a canvas and the paint is so much work, it's so messy. But yeah, I think making all art is just like a really good way for me to process what I'm going through.

YOU ANNOUNCED HARMONY HOUSE BACK IN FEBRUARY. WAS THE PROJECT COMPLETELY CONCEPTUALIZED DURING THE PANDEMIC?

SS: So I had finished recording pretty much all of it before Covid even happened. I mixed a lot of it during the pandemic and kind of switched out a lot of songs because there was a lot more music than what I've released. I kind of have plans to maybe do like a B-sides or something in the future. That would be really cool. But yeah, I just got to rethink it and mix it.

And I wanted to wait to put music out because it just kind of became like a big void. There was just so much noise going on that I didn't want to release the music yet. Because I had worked on it already and I was ready to release it. So I just had kind of a year of waiting and thinking and mixing more. But I'd written pretty much all of it.

DO YOU THINK THAT THE PANDEMIC IN ANY WAY CHANGED THE OUTCOME OF YOUR ALBUM, OR DO YOU THINK IT GENERALLY STAYED IN LINE WITH YOUR VISION?

SS: I think so. I mean, the crazy thing about putting music out is like once you put it out, no matter how hard you try to make people think of something a certain way, music lives a life of its own once it's out. So I think something like the pandemic where so many people have gone through different changes, I think it'll be applicable. But yeah, I don't know. I guess you can't really control the way that music is received. But hopefully it's a positive thing. I mean, it seems like it has been.

WELL, EVEN THOUGH THE PANDEMIC WAS DARK AND ALL, I FEEL LIKE YOUR MUSIC STILL KIND OF MAINTAINS A PRETTY FUN AND ENERGETIC VIBE, WHICH IS WHY I THINK SONGS LIKE "CAN I CALL YOU TONIGHT?" AND "HOTROD" WERE ABLE TO TAKE OFF SO PREVALENTLY ON SOCIAL MEDIA OUTLETS LIKE TIKTOK. HOW DO YOU FEEL ABOUT YOUR MUSIC'S PREVALENCE IN MODERN INTERNET CULTURE?

SS: Yeah, that's a good question. TikTok specifically, it's just crazy how big it is and like how advanced the algorithm is. It's just kind of strange. I mean, I think it's an amazing tool like that stuff can just blow up. It's crazy because I don't even think TikTok was a thing when I released "Can I Call You Tonight?" And then only a year later, TikTok just exists. So it's just weird.

The Internet has changed culture and the music industry so quickly, so incredibly quick. So it's crazy to be a part of it. I can really safely say that I didn't really have much to do with it at all. I just kind of like went on TikTok and it did its thing. But yeah, it's cool. I mean, it's awesome.

DO YOU REMEMBER ANY SPECIFIC MOMENT WHERE YOU WERE LIKE 'MY STUFF REALLY JUST SEEMS TO BE ECHOING ON THE INTERNET' AND YOU HADN'T TAKEN NOTICE YET?

SS: Yeah, well there's this thing on Spotify for artists. You can see your streams and stuff. Something cool about "Can I Call You Tonight?" is that usually when a song goes viral, it's like an obvious schwoop (motions upwards). And then it kind of goes back down, you know, because it's like a viral thing. But "Can I Call You Tonight?" had tons of different little viral moments, where TikTok was kind of the last one.

But yeah, I don't know. I mean, with TikTok, I remember my managers telling me like, "Hey, your music is TikTok now." like just on the platform. And so I made an Instagram story and I was like, "the floodgates are opened." And then it blew up, so.

IN A WAY, I THINK IT DEFINITELY SHOWS THAT YOU'VE COME A LONG WAY SINCE RECORDING YOUR FIRST ALBUM, FUZZY BRAIN, WHICH I BELIEVE WAS RECORDED IN YOUR CHILDHOOD BEDROOM, RIGHT?

AND NOW YOU'RE PERFORMING SOLD OUT SHOWS AND SPOTS ON SHOWS LIKE THE TONIGHT SHOW WITH JIMMY FALLON. SO IN WHAT WAYS DO YOU THINK THAT YOU'VE GROWN AS BOTH AN ARTIST AND A PERSON IN BETWEEN THE RELEASE OF THESE TWO RECORDS THAT YOU HAVE?

SS: Yeah, I mean, I've changed a lot I think. Like, I've always been really conscious of not inflating my ego or something. So I feel like as a person, my personality really hasn't changed much. I mean, I've gone from "Can I Call You Tonight?" when I was seventeen and now I'm twenty one. So naturally you change. But I would say people that know me are like, yeah, he is pretty much the same person, which is really cool and encouraging because that's my goal.

But I mean it's crazy. Like I was a college student and I just thought I was going to be like an advertising major and then graduate. And so everything just changed so quickly. But I'd still be around college students because all my friends are still in college. And it's just this weird thing that I had to figure out because I just grew up really fast. And it was fun and encouraging, but just really weird. So I'm still figuring it out. I have no idea what I'm doing, but I feel super stoked that everything is going the way it is.

WELL, THINGS SEEM TO BE GOING WELL. DO YOU THINK THAT THE CHANGE YOU EXPERIENCED LED TO A DIFFERENT CREATIVE APPROACH WHEN PRODUCING HARMONY HOUSE?

SS: Definitely so. Yeah, like Fuzzy Brain is mostly about waiting for change to happen and like wanting to change you. And Harmony House is addressing the change that happened so quickly, lyrically.

WELL, LAST QUESTION FOR YOU. THIS HAS REALLY BEEN RACKING OUR BRAINS HERE AT WERS AND I HAVE TO ASK. RECENTLY, ON FEBRUARY 2ND, 2021 YOU POSTED A PICTURE ON INSTAGRAM WITH THE CAPTION, "I JUST MADE AN OMELET. AND BOY, WERE THOSE FLAVORS AWESOME IN IT. I WOULD HAVE TAKEN A PICTURE, BUT IT'S IN THE DEPTHS OF MY STOMACH NOW FOREVER. GOODBYE, OMELET. HELLO, TUESDAY."

WE HAVE BEEN SO CURIOUS ABOUT WHAT THE INGREDIENTS IN THE PROCESS OF CREATING THE DAYGLOW OMELET IS, AND WE WERE WONDERING IF YOU COULD KEY US INTO HOW WE CAN MAKE ONE FOR OURSELVES.

I probably did spinach and cheese. That is usually what is for sure in there. I did some pre-made pico de gallo, which is, you know, onion and tomato stuff. A little of that was in there. I maybe had bacon? I'm not sure. That was probably it. And it was just good. And I had to share it with the universe.

SS: That's an awesome, awesome thing. You remember that.

Check out Dayglow's recently released sophomore album, Harmony House, today! You can read our album review of it here.

This interview has been edited for length and clarity.

Ball in the House: An A Cappella Juneteenth