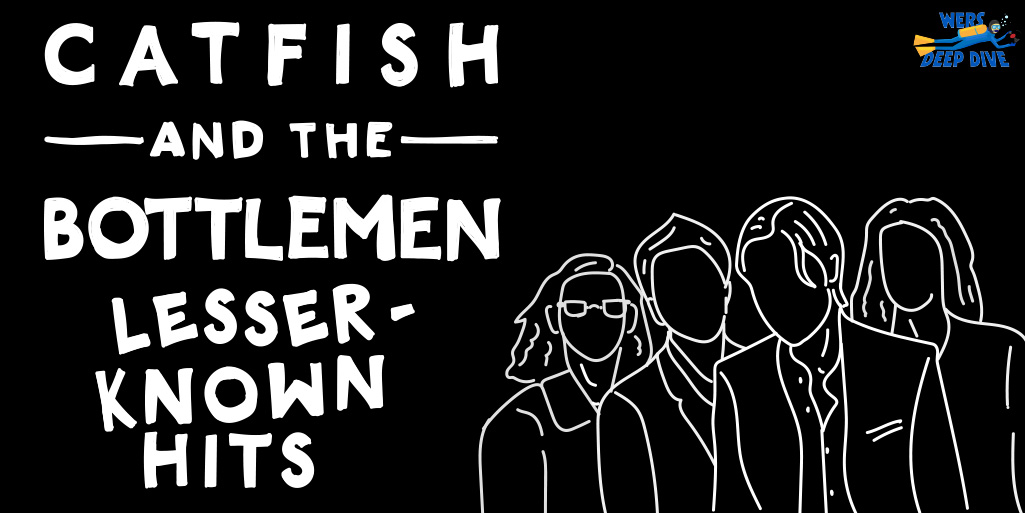 Have you ever heard a song and felt so connected to it that you thought it had to have been written especially for you? Well, that's the entirety of Catfish and the Bottlemen's discography for me. The raspy howls when singer Van McCann really gets into it; lyrics that redefine the feeling of freedom; guitarist Johnny Bond's cool, composed stature while ripping solos ‒ it's sheer perfection.

The Welsh alternative rock group formed thirteen years ago and rehearsed by playing countless Beatles covers. Three years later, they were signed to a record label owned and run by Mumford & Sons keyboard player Ben Lovett. Their music feels real and straightforward and as though I've known it my whole life. It's like a fresh nostalgia focused on bringing big guitar choruses back into the spotlight. To tie it all together, frontman McCann exudes and exemplifies charisma. He reminds me of Arctic Monkeys' Alex Turner, but more carefree and with triple the energy.

A few years ago, when I first discovered the band, I remember coming across one song and then bingeing the rest of the album before doing anything else. I couldn't get enough of every breath they uttered. Now I want to - no, have to share that with you. You've probably heard some of their hits like "2all," "Kathleen," "7," and "Soundcheck," and I love those songs. However, I wanted to dedicate a post to a deep dive into their lesser-known, yet equally incredible, tunes.

First up is "Anything," which also happens to feature the first solo I learned on guitar. Steady snare drums beat as a fuzzy, distorted guitar wails in the solo before the song closes with a massive final chorus.

Catfish and the Bottlemen frequently sprinkle specific lines throughout their tracks that recount everyday events and thoughts I would never think to reflect on because they seem so insignificant. However, those trivial details are what makes me, and I think a lot of other people, feel connected to their lyrics. Just the line "and though you'll mix up every detail of every story that you're ever gonna tell me" makes me immediately think of some of my friends, family, and even myself. I bet you've already got someone in mind too.

It seems crazy to me to label "Homesick" as one of the band's lesser-known hits since this was one of the first songs of theirs I heard. However, it is severely underrated and under-appreciated. With its speaker-shattering chorus, it belongs right up there with other Catfish powerhouses like "Kathleen" and "Soundcheck."

Once again, this song helped me achieve another milestone in my guitar journey. The part in the very beginning where the guitar notes follow the verse's melody and then go off on their own was the first fingerpicking riff I learned. I remember when I finally perfected it, I couldn't stop playing it over. My little sister definitely loved me for that one.

With a ticking hi-hat and McCann's electric guitar strumming, the verse starts slowly and simply before it builds in the pre-chorus and explodes with a "hey!" in the chorus. I remember when I first saw Catfish live I was in the center of the balcony at the House of Blues. From there, I could see that almost everybody shot their fist into the air as they scream-sang the "hey." That liveliness carried to every fan standing around me, all the way up to the third floor. Their fists quickly unfolded so their arms could reach out to sing the next line. Red lights flashed from the stage and Bond's guitar sounded notes continuously climbing higher, amplifying the energy.

For me, it was one of those striking moments during a show where you realize the band and their music means an inexplicably large amount to everyone in the room. I was proud and grateful to be there experiencing it all with such passionate fans.

"26" vocalizes the alt-rock band's slight pop influence. With a bright guitar tone and "ooh's" that follow along, it proves to be a super catchy tune that's fun and melodic. However, the band doesn't come close to abandoning their alternative roots. After about only a handful of words, McCann unleashes the raspy side of his voice.

As a fan of mostly rock and pop-punk music, I love how much grit he uses here. If you're like me and have a weakness to this style of singing, you should hear these guys live. Not only do they all add new parts to some of the solos and know how to entertain a crowd, but McCann's unedited voice is astounding. As he's running about the stage tangling himself up in guitar cables and clumsily knocking over the mic stand regularly, he lets his voice progress into an untethered level of howling raspiness. Everything about his performance looks freeing, and that feeling is contagious.

What struck me the most, and continues to strike me about this song, are the lyrics. Back in high school, I was chasing complete freedom and detachment. "Postpone" is an ode to pausing every day responsibilities to prioritize your happiness. It's about breaking routine, leaving your small hometown, and living without constantly placing limitations on yourself.

Growing up, I felt extremely restricted with what I was allowed to say and do, especially in social situations with adults. I was taught to always be polite, but I ended up associating politeness with compliance. So, I would barely say or do anything original because I knew agreeing was a safe option. All that passivity drove me to a point where I was tired of constantly filtering or keeping in every thought, word, and move. It felt like I was drowning in submission and losing myself in the process.

In the chorus, McCann sings, "From the minute you regret it to the minute that you let it go / to the minute you get fed up trying to please everyone." These lyrics articulated and affirmed everything I was thinking. I had never heard anyone talk about feeling done with acting agreeably and submissively in such an encouraging manner. It was inspiring and remarkably liberating.

From start to finish, "Mission" is a steady rock and roller with some twists. Right as I heard the fuzzy, muted strumming in the chorus and screaming guitar solo in the track, I paused it and grabbed my guitar. Yes, I'm going back to navigating through these songs as parts of my guitar journey.

As you have probably figured out by now, their music is a pretty big reason why I play guitar. While this song didn't help me reach another milestone or learn a new skill, figuring out solos and riffs by ear is always fun, useful practice.

A soft drum kick and warm, clean guitar play throughout the opening verse, crafting a more sullen mood. Right as you're getting a little comfortable with the calm, Bond and McCann switch into dirty rock mode. A dark guitar tone kicks in to play a menacing-sounding, descending riff, and McCann breaks into his signature howling scream. The chorus settles the intensity with acoustic guitar, yet the song still feels just as powerful.

With its unpredictable energy switches, the instrumentation stands out. This is the only Catfish song where the spotlight turns to the bass alone, which amplifies the intensity. Layers of monstrous riffs and licks keep building on top of one another, drawing you in with its massive sound before abruptly cutting off at the end.

This absolute jam is the most fun song off their latest record The Balance. Simple, clean guitar chords bounce back and forth during the verses, setting "Sidetrack" up to be a bubbly, melodic tune. However, in typical Catfish fashion, Bond stomps on the distortion pedal, cranking up the electricity. It's an instantly catchy and lovable song that's soft and punchy in all the right places.

When Catfish released The Balance last year, I set aside time to listen to the whole album straight through as a single piece. This song kind of messed up that plan for me though. When the three minutes of boisterous fun were up, I wasn't ready for it to be over yet. So, I replayed the tune a few times to make sure I got everything out of it before moving on.

Of course, I had to finish off this playlist the same way the Welsh rockers have been ending their shows since they were fourteen. Yes, you read that right. McCann wrote and finished this gem of a song at just fourteen. Initially, the tune was simply about the singer going to his first house party. However, he rewrote the lyrics to make it sound more age-appropriate. Still, the fact that he penned this masterpiece at such a young age is extremely impressive.

The instrumentation toward the finale of this tune reaches a stunning climax. At their live shows, they always tag on a few extra minutes of playing and individual solos for a flare of extra drama. It's just as striking and surreal each time I experience it in person.