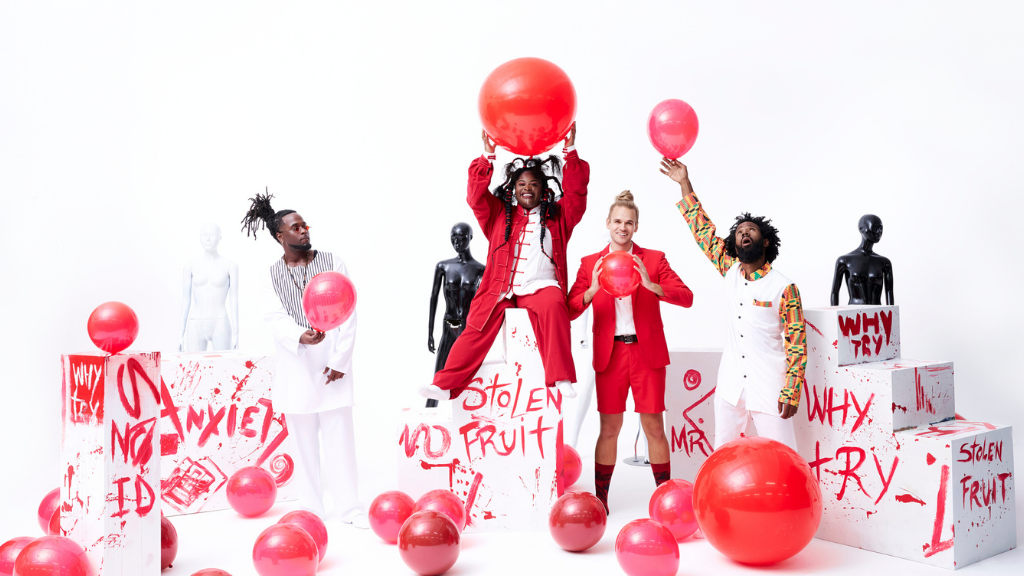 New Orleans-based group Tank and the Bangas, fronted by Tarriona “Tank” Ball, are gearing up to release their latest album Red Balloons on May 13th. They recently put on a show locally at Paradise Rock Club on March 14th. Just ahead of the performance, staff writer Breanna Nesbeth sat down with Ball. The two talked about bringing New Orleans to Boston (and beyond), dove deep into songs from the new record, and more.

SO FIRST, WELCOME TO BOSTON! IS THERE ANYTHING IN BOSTON THAT YOU ARE EXCITED TO SEE, OR THAT YOU'VE ALREADY SEEN? ANY TOURISTY THINGS THAT YOU WANTED TO DO?

Tank Ball: Today I went to the thrift shop and that was dope. Which one I went to today— Diversity Consignment. I was able to look around and grab a lot of things, so that was fun. I was happy I did that

WELL, YOU ARE WELL ACQUAINTED WITH TOURING. YOU'RE ALWAYS ON THE ROAD. HOW DO YOU HANDLE THE FREQUENT TRAVEL AND BEING AWAY FROM HOME FOR SUCH LONG PERIODS OF TIME?

TB: Sometimes before tour, I'm like, ‘Oh God, I'm not ready. I’m not.’ But once I’m in it, I’m in it, you know? As long as I got a good pillow, the front row seat to myself, then I can do this. If I don’t got that front row seat to myself, it might be a problem. I need to stretch out these little-bitty legs. You see me rubbing my legs! Girl, my knees be hurting. So, just as long as I’m comfortable.

SO MANY YEARS OF TOURING, SO HOW DO YOU TRY AND STAY CONNECTED TO NEW ORLEANS WHEN YOU ARE THOUSANDS OF MILES AWAY FROM HOME?

TB: Instagram helps a lot, and New Orleans travels with you. The sweetness, the kindness, the openness, the conversations with anybody you can have. It’s just with you, inside of you, so you never feel far from home.

IT'S LIKE THIS SOUTHERN COMFORT THAT PEOPLE TALK ABOUT.

TB: Yeah and it's not even just ‘Southern—’ it's people. They really are their own type of tribe. They've got their own dances, movements. And, you know, because these are people from Africa, obviously, and they just have things that just travel with them for years. You could just see it, man. The way that we celebrate the culture, and the bounce, and the people on the street, and our Super Sunday's, and our crawfish; our spices.

When you travel you realize, ‘Damn, I live on an island.’ Nobody calls it that but we are. We have a beach and we are surrounded by water — it’s an island!

I'M FROM FLORIDA, AND I'VE BEEN TO NEW ORLEANS A COUPLE OF TIMES–

TB: What are you doing here [Boston]?!

I JUST GO TO SCHOOL HERE! I DON'T LIKE THE COLD!

BUT IT IS SO BEAUTIFUL, NEW ORLEANS. GOING THERE DOESN’T FEEL LIKE I’M IN THE UNITED STATES

IT FEELS LIKE I'M IN A COUNTRY OF ITS OWN.

TB: Yeah, and that's exactly what it feels like. Cause, I've been in other countries and New Orleans feels like another country. You should go to the French Quarter Fest, which is the first festival that Tank and The Bangas will ever headline!

SO I WAS WONDERING IF THERE ARE ANY SPECIFIC MOMENTS OR MUSICAL TECHNIQUES THAT ARE IN YOUR MUSIC THAT DRAW FROM BEING FROM NEW ORLEANS?

They got one where they’re like ‘And you know you big and ain’t got no ass,’ like that’s me! ‘Bend it over, buss it over,’ I like that when I go on stage and I inspire the girls to move. That's New Orleans.

THIS IS A BIT NICHE. I WAS WATCHING A COUPLE OF INTERVIEWS OF YOURS AND I HEARD THAT ONE TIME YOU MENTIONED THAT THE SONG “EMPIRE ANTS” BY GORILLAZ WAS THE INSPIRATION FOR THE TITLE OF ONE OF YOUR SONGS.

ONE OF MY FAVORITE SONGS OF ALL TIME, “EMPIRE ANTS.” AND IT WAS JUST SO INTERESTING TO ME TO HEAR ABOUT A MUSICAL ARTISTS… MUSIC, YOU KNOW? SO I JUST WANTED TO ASK YOUR PERSONAL MUSIC TASTE. WHAT DO YOU LISTEN TO ON A DAY TO DAY?

TB: Oh my gosh, this could go everywhere. Right now, it's Smokie Norful “I Need You Now,” Daryl Coley “Beyond the Veil,” Erica Banks “Slim Waist,” “Black Folk” by Tank and The Bangas, and “Pass The Courvoisier” by Busta Rhymes.

SO DO THOSE INCLUDE ANYTHING NEW THAT YOU'VE DISCOVERED OR ARE THOSE, LIKE, STAPLES?

TB: Those are mostly old, honestly. The new stuff– Kalisway, I love her. I want to get into her new album HIT’EM WITH THE FUNK, because she has a song, “HIT’EM WITH THE FUNK,” that’s really good. But honestly, it’s been a lot of our own Tank and The Bangas music that’s been on repeat that’s not out, so it’s new to me still. And its just so good and so rich, we spent the whole way driving just listening to it, going through song after song.

THAT MUST BE SO AWESOME TO HEAR YOUR OWN WORK, SOMETHING THAT YOU'VE PUT SO MUCH TIME INTO.

ON THAT NOTE, I KNOW THAT YOU'VE SAID A COUPLE OF YEARS AGO THAT WHEN YOU FIRST STARTED MAKING MUSIC, YOU DID IT BECAUSE YOU WANTED SOMETHING TO LISTEN TO YOURSELF. YOU MAKE MUSIC–

TB: Because I wanted to hear my own self!

THIS WAS YEARS AGO. SO WOULD YOU SAY THAT YOU STILL HAVE THIS AS THE SAME MOTIVATOR?

TB: Yeah, you just heard me! I like to listen to my own recordings

I LOVE HOW YOU KIND OF GOT TO THAT ANSWER BEFORE I EVEN HAD TO ASK THAT QUESTION. IT’S SO TRUE TO YOU.

TB: Yes, I love to listen. When we leave the studio, I need a scratch vocal of what we just did immediately so I could drive home and just listen to it over and over.

DO YOU EVER CREATE ANYTHING THAT'S JUST FOR YOU, THAT WILL NEVER MAKE IT TO THE PUBLIC?

TB: Yeah, for sure. Especially poems. But a lot of my poems, they turn into songs.

I HAD A QUESTION FOR YOU ABOUT THAT! I'VE NOTICED THAT YOUR LYRICAL STYLE IS REALLY STREAM OF CONSCIOUS. YOU'RE VERY RAW AND NATURAL IN YOUR DELIVERY, SO MUCH SO THAT IT DOES COME OFF LIKE POETRY. SO BEING A POET, HOW DO YOU KNOW WHAT WORDS WILL BECOME A POEM AND WHAT WILL BECOME A SONG?

I'm telling you that, but I don't even want to reveal the way that I go through my process no more.

SPEAKING OF PROCESS, YOU WORK IN A GROUP. YOU HAVE AN INCREDIBLE GROUP OF FELLOW MUSICIANS TO WORK ALONGSIDE. WHAT DOES THE COLLABORATIVE PROCESS LOOK LIKE? ARE YOU GUYS INDIVIDUALLY BRINGING SOMETHING OR ARE YOU COLLABORATING TO PRODUCE IDEAS THAT THEN BECOME PIECES OF WORK?

TB: It’d be that. It’d be all of it. Yes, it's all of it, plus a bunch of stuff. It's all of it for real, because it’s so many different people, so the process of [what] the song comes to be changes within each song.

WHAT IS THE BIGGEST TAKEAWAY YOU'VE LEARNED FROM BEING WITH SO MANY GREAT, FELLOW BANDMATES? WHAT HAVE THEY TAUGHT YOU?

TB: So much. So much to learn. This is like the first tour where I'm just sharpening up my ear a little more than usual. I want to know what they know. I'm tired of not knowing what they know because they can have so many conversations that just go over my head.

DO YOU THINK THEY THINK THE SAME THING ABOUT YOU?

TB: In what sense?

THEY WANT TO KNOW WHAT YOU KNOW?

TB: Ha! I don't know, I don't know. I feel… I think that they respect what I do and they think that there's some magic to it that’s straight up from God that they won't ever understand. But me, as far as the musical language, I want to know it. So that I can communicate with them differently.

THAT’S AMAZING. I WANT TO GO A BIT DEEP WITH THIS QUESTION. SO YOUR LATEST SINGLE, “STOLEN FRUIT,” AS YOU'VE COME TO DESCRIBE IT, IS ABOUT THE SLAVE TRADE AND THE CONTINUATION OF A CONCEPT BY BILLIE HOLIDAY'S “STOLEN FRUIT.” SO DO YOU SEE MUSIC AS A TOOL THAT CAN REFLECT THE TIMES AND RECREATE THE TIMES?

TB: Of course! I never really looked at it that way. Like Nina had said, until you do it. One of our first songs, “Mr Bluebell,” is about what's going on right now. It's about teachers in and out of Zoom meetings, talking about how those men stormed the Capitol, and, you know, our government. But it's so catchy, you'd never even know it! You’d never know we were talking about something so serious. But that moment [storming the capitol] made me uncomfortable and I needed to talk about it, and I just didn't understand. Like, wow, that's crazy. No repercussions.

AND ANOTHER ONE OF YOUR LATEST SINGLES, “NO ID,” EXPLORES THE CONCEPT OF BEING PROTECTIVE OF YOUR SPACE, SETTING BOUNDARIES, BEING CONSCIOUS OF SOMEONE'S TRUE INTENTIONS. WHEN DID YOU LEARN THIS LESSON?

TB: I didn't learn it until after I wrote it. Yeah, I wasn't going through nothing. I just wrote it. A lot of my stuff has it’s meaning later on. So I think I learned later on about the meaning of that song, it's crazy. I probably was warning myself.

AND THE LAST QUESTION I HAVE FOR YOU. YOU ARE A POET, A SONGWRITER, A MUSICIAN– IS THERE ANY OTHER ART FORM YOU'RE INTERESTED IN? WHETHER IT BE FOR PERSONAL FULFILLMENT OR CREATING SOMETHING TO POTENTIALLY PUT OUT.

TB: Hm… I don’t know, just getting more into voiceover work and… I don’t know man. I’ve done everything I’ve wanted to do right now, and I do a lot.

TB: And I’m lazy. Well, I’m not lazy. I like my downtime! Because I have so much uptime. So I don’t know. If I'm being taken care of in all the ways that God knows I love to be taken care of, then I'm fine. Thank God I'm naturally gifted, cause I don’t know what I would be doing!

Tank and the Banga’s upcoming album Red Balloon will be available in full on May 13th.