Artist(s): Beck and Cage the Elephant

The Night Running Tour made a stop at the Xfinity Center in Mansfield on Thursday night with a stacked bill featuring rock powerhouses Beck and Cage the Elephant.

Supporting them was Sunflower Bean and legacy indie band Spoon.

Of the two headliners, Cage hit the stage first. The eccentric energy the band brought was immediately palpable, with an epic pyrotechnic display and the outfit opening with "Broken Boy" from their new album Social Cues. The instrumentalists of the band played loud and appeared cool and aloof. Frontman Matt Schulz immediately busted out some erratic and hyperactive stage moves.

Schulz was all-in for this performance, fitting the fast energy of Cage's music. As he sauntered and sung around the stage he would occasionally break out Jagger-esque dance moves. The band played their big hits from their first two albums ("Ain't No Rest for the Wicked" and "Shake Me Down"), but largely stuck to covering much of their new LP as well as their Grammy-awarded 2015 album Tell Me I'm Pretty and the critically acclaimed Melophobia.

Beck began his performance with an acoustic guitar solo that transitioned into his classic '90s hit "Loser."

He immediately got the crowd moving and turned the already high energy of the crowd up to 11. The man certainly knows how to put on a show.

Beck hyped the audience up for songs with fun stage chatter and brief anecdotes. Across his set, he played songs from his most recent album, the electro-pop influenced Colors. However, Beck also showed his cool rocker side with songs from older albums like Guero and Odelay. Also included was a rendition of "Girl," in which he specially included the iconic chant from rapper Kanye West's "POWER."

Beck slowed things down for an intimate version of the goofy R&B track "Debra," and ended the set with the hard-rocking "E-Pro," though there were a couple of surprises in store.

During the five-song encore, Beck brought out Britt Daniel of Spoon for a cover of "Pump It Up" by Elvis Costello & The Attractions, followed by Cage the Elephant again appearing on stage for the two acts to play their collaborated song "Night Running," which appeared on Social Cues. Finally, Matt Schulz joined Beck for his songs "One Foot in the Grave" and "Where It's At." 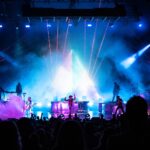 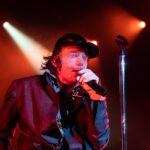 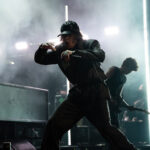 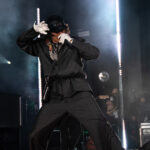 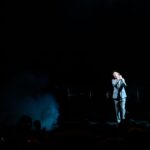