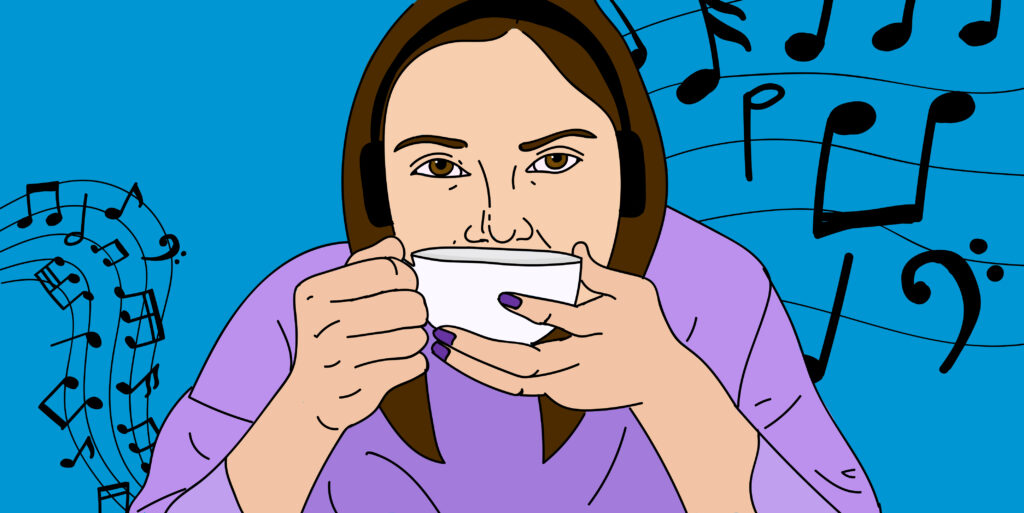 Like everyone else my age, I'm obsessed with coffee. Being a constantly busy college student, I'm always craving a cup of coffee wherever I can get it. Even though I'm running to and fro around campus downing an iced coffee at almost any point in the day, coffee to me is best served in a relaxing environment, freshly brewed and perfectly made. Here are five songs that are as calming and warm as a great cup of coffee.

Bedouine's intimate, acoustic/folk sound makes every one of her tracks feel like a truly fantastic coffeehouse performance. "Nice and Quiet" is the opening track from her 2017 self-titled album. It's a song that encompasses the singer's instrumental and vocal talents perfectly. Her smooth vocals glide over a lush combination of violins, acoustic guitar, and drums that have the gentleness of rain tapping on a roof on a rainy Sunday morning. Pour yourself a fresh cup of whatever suits you and mellow out to Bedouine's vibrant sound.

When I find myself sitting in a café watching the time go by, I find myself coming back to the music of Joni Mitchell. With her otherworldly songwriting talents, Joni Mitchell is an artist that demands close attention to her music. One of her very best tracks, "Amelia," is one that sounds as warm and comforting as a morning brew. Over a sparse arrangement of just guitar, Mitchell spends over six minutes singing an ode to fallen pilot Amelia Earheart. Filled with beautifully written verses that feel sweeping like the skies Earheart spent her life traveling through, "Amelia" is one of Mitchell's greatest pieces of songwriting.

Boygenius is a supergroup in the truest sense. With three of indie's best singer/songwriters-Julien Baker, Lucy Dacus, and Phoebe Bridgers-their collective songwriting talents combined in 2018 to make one of the year's greatest releases. "Ketchum, ID" shows the group combining together incredibly. Trading verses and joining together in perfect harmony during the song's chorus, the group creates a stunning, goosebump-raising atmosphere that's not unlike a crisp fall morning. While the band sings about their grueling life on the road, the song has a comfort to it that feels like home all along.

Mazzy Star has enjoyed a legacy of being masters of dreamy, introspective alt-rock for nearly three decades. However, one of the band's greatest moments is a song that came years before they put their spin on it. From their 1993 album So Tonight That I Might See, Mazzy Star's cover of Arthur Lee's "Five String Serenade" is the type of song that sounds best with a warm cup of coffee as the sun rises. Lead singer Hope Sandoval uses her signature vocals to incredible effect, anchoring the song amidst a sea of strings and guitar. Changing the song's style from psychedelic to acoustic, the group makes it their own and flips the track to shine a new light on Arthur Lee's vivid lyrics.

"Crystal" has enjoyed a long history in the repertoire of Fleetwood Mac's bandmates. The band originally recorded the song for Lindsey Buckingham and Stevie Nicks's collaborative album in 1973. The band re-recorded the song two years later when the duo joined Fleetwood Mac in 1975. Despite writing the song, Stevie Nicks was relegated to background vocals for both these versions. However, in 1998, Nicks took back the song decades later and made her own version. Nicks's "Crystal" is perhaps the greatest version of the much-recorded song. It keeps the same foundation as past versions, but Nicks uses her iconic voice to bring a new perspective to the song, one that sounds much more poignant after years of being an artist. It's a song that feels like the perfect cup of coffee - relaxing, smooth, and great right until the very end.

Playlist: Songs to Clean to