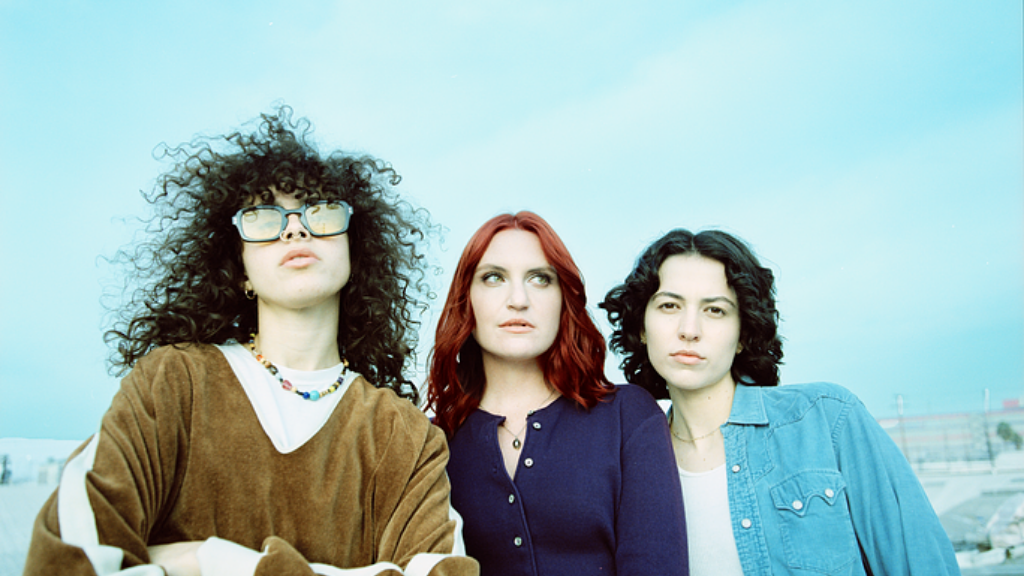 After bursting in popularity with their hit track “Silk Chiffon,” released last year, MUNA is gearing up for their third album to be their biggest one yet. Music Coordinator Tatum Jenkins had the chance to sit down with Naomi McPherson, Kate Gavin, and Josette “Jo” Maskin (the entire electronic pop trio) shortly before they announced this upcoming self-titled LP.

WHAT NEW OPPORTUNITIES HAVE YOU HAD WITH THE SIGNING TO PHOEBE BRIDGERS’S LABEL? HAVE YOU HAD ANY NEW CREATIVE AVENUES THAT YOU WANT TO EXPLORE OR HAVE BEEN ABLE TO EXPLORE?

Naomi McPherson: Quite frankly, it's just like having someone as your A&R who also has a platform that they can leverage on your behalf. And also a musician does just come with sort of inherent benefits for us in terms of the audience that we are exposed to sort of de facto via [Phoebe Bridgers] signing us. It’s been super helpful. She also did a song with us, so it’s all tied up— the label signing and “Silk Chiffon.” It’s all tied up in the continuous slow build up we’ve had for years, but it feels a little quicker now. That's the best way I have at describing it. It has affected everything across the board for sure, but we’re still out here hustling.

AND SPEAKING OF “SILK CHIFFON,” WHAT WAS THE INSPIRATION FOR THAT SONG? EVERY TIME I LISTEN TO IT, I THINK, ‘WAS IT THE ROLLER SKATING? OR THE MINI SKIRT? WHAT WAS IT? AND HOW DID IT COME TOGETHER?’

Katie Gavin: So “Silk” was a song I started writing right after we finished our second record MUNA Saves The World. And Saves The World is a much heavier record. But I think as a result of having the opportunity to share that record, I had felt like a weight was kind of lifted.

I remember, we went out and saw my friend’s concert. Actually, [it was] our friend Lou, who’s now going to open for some of our headline shows on this tour. And then I came back home and I was just like in a fun mood and I started writing that song.

I'm a roller skater and a blader, so yeah, it is kind of based on real life experiences. And I'm also a very depressed person. I need to have hobbies that make me happy. And that's kind of the joke of the whole song. I have moments of joy and I wanted to get it down, and I showed it to them and they thought it was funny. We worked on it for a couple of years.

DO YOU HAVE ANY ROLLER SKATING TIPS?

KG: Find the community in whatever city you’re in. Because the amazing thing about roller skating is there’s a whole culture of teaching for free. Even on Instagram, people want to share it because it’s so helpful and we love it. And like, put your skates on every day. I don’t actually do that myself, but I’ve been skating a lot on this tour because I skate around the concourse.

We’re opening for Kacey Musgraves. She's playing arenas, and in arenas, you could skate on the arena, which it's dope. But if you’re in an apartment and you have tile or wood anywhere, putting your skates on every day and the more comfortable you are going on your toes or your heels.That’s going to make a huge difference. But it depends on what you want to do. I love the girls that are down to skate the bowls and stuff. I’m more of a dance skater, so that’s my interest.

SO HOW HAS OPENING FOR KACEY MUSGRAVES BEEN? HOW HAS THAT BEEN DIFFERENT FROM PREVIOUS TOURING EXPERIENCES?

JM: I mean, this is the first time that we've ever played an arena, so that in itself is an all new venture. But it’s been an absolute pleasure. Kacey is one of our favorite artists and we’ve been talking about her and Golden Hour was a really big inspiration for [our song] “Taken.”

It's just pretty surreal that we get the opportunity to share a stage with her. It’s just a delight. Just getting to see her perform and getting to see fans really connect with her music, it's just been a wonderful experience. It really centers you and why you're playing these shows.

YES, I LOVE HER! SHE MAKES AWESOME MUSIC. AND WE’VE TALKED A LITTLE BIT ABOUT YOUR LAST ALBUM, BUT WHAT DIRECTION DO YOU WANT TO TAKE WITH THIS NEW PROJECT? IS THERE ANYTHING YOU WANT TO EXPERIMENT WITH OR AN AESTHETIC YOU’RE THINKING ABOUT?

NM: As far as aesthetics go, I think we’ve sort of found the world we like to live in, and it's all sort of interrelated to some of the stuff that we did for Save the World. We just want everything to be a little bit more of a testing of the limit of the extreme of one thing or another.

The next record has a variety of different sonic universes that it lives in, which I think we did on the second record, but we're doing [that] more so to a bigger extreme. Like if it's the pop song, [it’s going] to be a big pop song. Or if it's like a pop rock song, like “Silk Chiffon,” it’s going to go all the way. And we have songs that are country songs. It’s a bit more exploratory in that sense. We’re always ourselves. We make the kind of music that we make because it’s just shit that we like.

KG: That’s such an interesting question. I've always found that for me as a songwriter, I can never like actually name a method to the game. The game always evades me. I found that it doesn't necessarily matter if my life is limited in some way. So let's say with COVID, it's like maybe I'm not traveling and [seeing] a different city on an airplane. But what I can do during the day is like take a walk and I can sometimes find songs on walks. Like the last song on the record, I finished writing just walking by the river by my house. And I really feel like I do experience [it like] an Easter egg hunt.

You just have to be willing to go out or listen to something new. And it doesn’t have to be new music. I recently decided, ‘You know, I need to listen to all the Tracy Chapman records. I really need to go in and just give myself the experience.’

There are so many ways to open yourself up to inspiration. And I think part of the game in a global pandemic is just accepting the limitations that are at hand, but working within them, which is also a game of production as well. We had limitations with this last album. You know, we’re not working with other producers. But Naomi and Jo are such amazing sonic artists and we can work with whatever budget and equipment that we have on hand and just try and still open ourselves up to being inspired with whatever we got. I think that’s really the fun of the game.

ONE THING I’M ALWAYS THINKING ABOUT WITH YOUR MUSIC IS IDENTITY. IT FEELS LIKE SUCH A CORE PART OF IT, AND THAT’S WHAT INITIALLY BROUGHT ME TO YOUR MUSIC. BUT HOW DO YOU SORT OF BALANCE MAKING IDENTITY A PART OF YOUR MUSIC, BUT ALSO MAKING SURE THAT THAT'S NOT THE TOTAL OF IT?

NM: I think a lot of like identity being [in] the music is very subtle. And I think [that] identity being a part of how people perceive you is not necessarily something that we can fully be in control of. Because we are queer, it becomes a story of identity. Or because I’m a person of color, it becomes a story about how we're a group of people who are marginalized in a variety of different ways. Whereas a white band is just a band.

And [that’s] not to say that us speaking to our identities and speaking about issues that are important to us is not a very important part of having a platform. But it’s not the most important part of how we make music. We want to be as good as we can about having good politics and being on the right side of issues and raising awareness for things that need to be made aware of. But we are not activists, we are artists.

I think that can get kind of like subsumed into the mainstream music industry and how they want to monopolize and capitalize on your identity when [it] really doesn't really have that much to do with how we make music. We are queer and it is fun to talk about that kind of stuff, but it definitely doesn't affect how we make music. Maybe we make music gaily.

JM: You make as you are.

KG: Because we are who we are, the music is always going to be politicized in some way. But when we're actually working on stuff like most of the time, it's like the songs just come from us living our lives. And we're just trying to make the best music that we can make.

We're always very happy to understand that there are queer people or people of marginalized genders who listen to our music and get a message from it, like, ‘Oh, I can be whoever I want. I can do what I want.”

NM: Let me be clear, we do make music for those people.

KG: But we also acknowledge we're going to be slotted into our identities just because we have marginalized identities.

NM: We’re subjected to the cis, white, hetero-gaze from the majority of the population while at the same time knowing we belong to a community and we do have certain responsibilities towards them. And we hope they like our music. But shout out to the straight people who like us too, it’s all good.

MUNA’s self-titled third album will come out on June 24th and is available for pre-order now.