The Killers Made the Ground Shake at Boston Calling 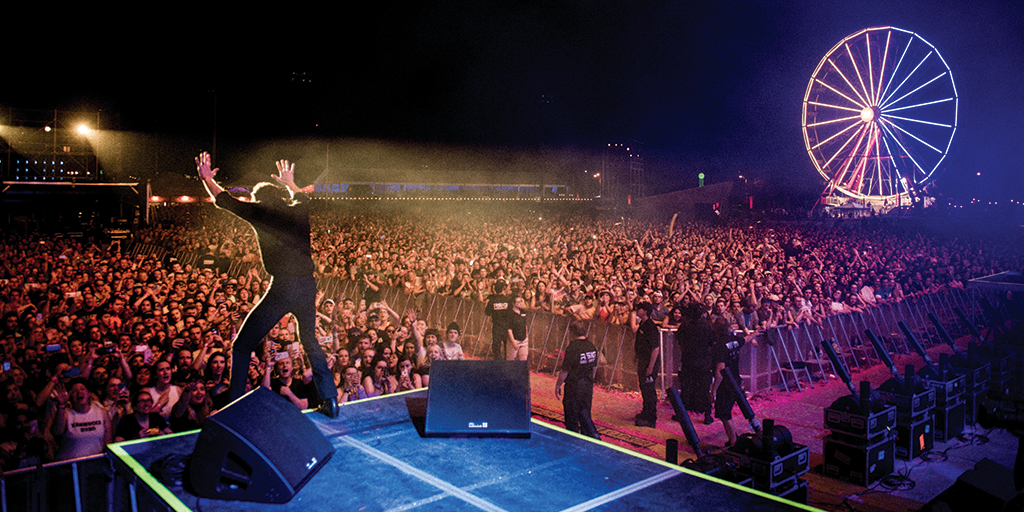 The Killers made no haste on Friday during Boston Calling as they launched into "Mr. Brightside," the fan favorite that has been sitting in the UK charts for 14 years straight. The solid earth shook as hundreds of fans jumped and screamed their hearts out, the only proper way to sing along to the hit. At the conclusion, lead singer Brandon Flowers' voice could be heard over the crowd for the first time as he announced, "the Red Sox are up, the Celtics are up, and The Killers are back in Boston."

with a dashing suit, two buttons opened past formal, complete with sparkling lapels and dark slicked back hair. A giant light-up Mars symbol took center stage in reference to the most recent albums lead single, "The Man." The women shined as well as the trio of backup vocalists harmonized above their own glowing Venus symbols.

The crowd was still buzzing from the explosive opener. The Killers kicked off the rest of their ninety minute set bursting with Las Vegas style glitz and drama. As the first chord to "For Reasons Unknown" repeated indefinitely, Flowers invited up a member of the audience who he introduced as "Nick from Boston." The young man looked completely overwhelmed as he hugged members of the band but took Ronnie Vannucci Jr.'s place at the drums with spectacular skill and confidence.

At the end of the song the band gave the teenager room for a solo as the crowd chanted his name. Flowers then paid tribute to Tom Petty with a cover of "American Girl" which melded into "Free Falling" mashup. Flowers nailed the vibrant energy encompassed by the late musician. This was a preview of their tribute for Petty at the upcoming Rock & Roll Hall of Fame Awards.

The Killers completed their set with an extended version of "All These Things That I've Done."

The audience passionately chanted the anthem's stand out line, "I got soul but I'm not a soldier," as confetti cannons burst pink clouds into the air. They were done for the night. Or, were they?

Flowers came back to the stage in a tight golden suit that could probably be spotted from across the Charles. Flowers graciously posed for the audience, showing off all sides before beginning his encore set.

The Killers closed on "When You Were Young," and a waterfall of sparks exploded from above the stage. After Flowers' true exit, Vannucci stuck around with a fist full of drum sticks. He announced he had brought the crowd a 'bouquet'. He tossed the 'bouquet' into the audience. Then, he signaled that he had one more treat and dismantled a cymbal from his drum set. To the relief of everyone he didn't toss this gift out but handed it gingerly to a lucky fan in the front row, whom contacted us on Twitter. With that, the Killers were the perfect headliner to conclude a vibrant first night at Boston Calling.