Get To Know the Happy Fits 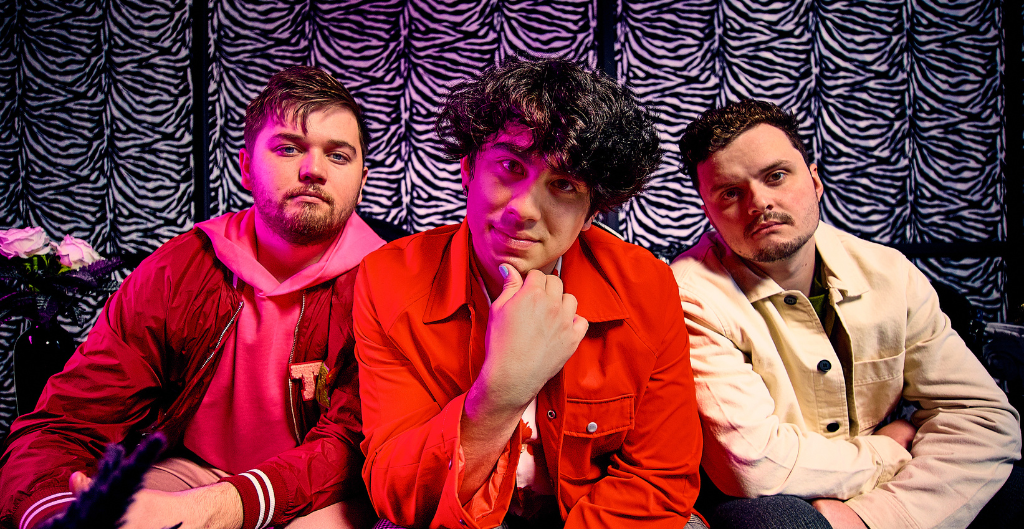 Two days before releasing their latest record Under the Shade of Green, the trio The Happy Fits sat down with Music Coordinator Tatum Jenkins to introduce themselves to our listeners. Calvin Langman, Ross Monteith, and Luke Davis talk about the story behind their song “Do Your Worst,” look ahead to their next visit to Boston, plus, clear up the rumors about their origins.

CAN YOU QUICKLY INTRODUCE YOURSELVES AND WHAT INSTRUMENT YOU PLAY?

Ross Monteith: I’m Ross, I sing and I play guitar.

Luke Davis: And I’m Luke and I play drums and sing.

NICE TO MEET YOU GUYS! SO I KNOW YOU ALL MET AT RUTGERS…WERE YOU ALL IN SAME MAJOR? HOW DID YOU MEET?

CL: So believe it or not, that’s fake news that NPR propagated.

CL: I don’t know how that rumor started, but I think it’s from our house shows that we used to play near Rutgers in 2017. We did around five or six and then they just started getting so massive that the cops started showing up, so we had to stop doing that.

LD: I think people assumed that we went there at that point because we also had friends there as well. Calvin went to school in Mercer in Georgia, I went to school at William Patterson [in Wayne, New Jersey], and Ross went to school in Delaware. So we actually all went to different places. [Calvin and Ross] knew each other from high school, we all went to the same high school, and they started writing music together. I met them through Ross’s older brother, who’s one of my good friends, and they needed a drummer for the EP. We all met recording the EP.

THAT’S AWESOME! WHERE ARE YOU ALL FROM ORIGINALLY?

OKAY! SO NOT TOO FAR FROM BOSTON I WOULD SAY. HAVE YOU BEEN TO BOSTON?

RM: You can only fit a drum kit on it pretty much.

LD: And I had the mixers up there for the band and I didn’t know how to mix, so when we played there, I was just hoping it sounded okay the whole time.

IT IS A CHAOTIC PLACE, BUT IT IS PRETTY FUN! AND GETTING TO YOUR MUSIC— WE PLAY “DO YOUR WORST” ON AIR, AND I WAS CURIOUS WHAT’S THE BACKSTORY TO THAT SONG? HOW DID IT COME TOGETHER?

CL: It started in January of last year. It was one of the first songs that we demoed for the record. I remember the vibe at the time was like, ‘we’re kind of still really in the pandemic,’ and it was really cold outside.

I was definitely in a darker songwriting vibe. I was listening to a lot of Radiohead and the Drums, they’re a really great surf rock band. And I don’t know, I remember working on the song one night and sending it to the guys and I was like, “They’re probably not going to like it, it’s too dark, it’s too different.” And they ended up really liking it, so we took it to the studio in June and that’s when we finally wrote a chorus to it.

The cello solo is kind of what kept the whole thing grounded from beginning. We knew, “Alright, the best part of the song is when the cello starts screaming.” That’s what we focused all of the songwriting around.

I KNOW YOU GUYS HAVE AN ALBUM COMING OUT IN TWO DAYS, SO CONGRATS! WHAT WOULD YOU SAY IS THE FOCUS OF THE ALBUM? DID YOU HAVE ANYTHING IN MIND WHEN YOU WERE MAKING IT?

CL: Every song we write, we come at it from a melody-first approach. So if the melody’s catchy enough, we’ll turn it into a full song. That’s kind of how it’s been with all of our albums. I think if anything it’s the arrangements and the orchestration or the layers that we add— that’s what improves record to record.

And this one we had six months to work on. So compared to the six weeks on our first two records, we had so much time to experiment with synths and add on extra guitars and add on extra vocals. So this one sounds a lot fuller and warmer.

LD: I think also what’s important is a lot of the songs that we had originally, that we used to write, were a lot of self-experience. Of growing pains, of life, or just growing up and heartbreak in general.

This one definitely has a lot more songs that focus on a bigger picture than just ourselves; not just a lot of “I” and “me” kind of feelings— it’s everyone. It’s more broad and mature in that way.

IF EACH OF YOU COULD CHOOSE YOUR FAVORITE SONG OFF THE RECORD, WHICH ONE WOULD IT BE AND WHY?

RM: My favorite song used to be “Do Your Worst,” but after re-listening to the album closer to the release… There’s a big period where I didn’t listen to it at all because we spent so long making it… It’s a song called “Little One.” Calvin wrote it about the future basically; it’s a song for his future child and it’s very sweet. It’s a really fun song for me to play personally and harmonize on. And I think it’ll be really fun live.

CL: I think “Little One,” too. I just love the vibe of it. I grew up listening to so much of the Killers early stuff. And I feel like this song could be a Killers song from how rock-pop it is. Also, the cello in it — the cello solo in the beginning, it’s such a unique way of starting a song. We’ve had cello as a base, but never as the forefront of a song, like right off the bat.

And [also] the fourth track on the album, “In The Lobby.” I’m really happy with the way both of those songs turned out.

LD: I’d have to say “Dance Alone” — the tune Ross wrote — I really love. It’s just a fun, fast-paced song, and whenever we practice it, I’m really excited to play it live. I just feel like it would be a good tune to have everyone dance along to.

That one and “In The Lobby.” That was one that Calvin wrote a while ago and we really took a lot of time to make it work and I think it became — I loved it always — but it really became something super unique and cool. It’s a fun one. And also, the album is named after a lyric in it.

FOR MY LAST QUESTION, YOU GUYS ARE COMING TO BOSTON IN DECEMBER, AND I’M SUPER PSYCHED FOR IT! IS THERE ANYTHING YOU’RE EXCITED TO DO WHILE YOU’RE HERE?

CL: Last time, I went thrifting right by the Middle East – there’s so much stuff to do. I think I hit like three different thrift stores and I got a lot of cool clothes. So I’m definitely looking forward to coming back. Especially with Christmas being the week after the show!

RM: Is the venue we’re playing close to the Middle East?

I THINK YOU’RE PLAYING PARADISE ROCK CLUB, WHICH IS IN ALLSTON. IT’S A DIFFERENT PART OF BOSTON, BUT THERE’S A LOT OVER THERE.

RM: There’s that main street right next to the Middle East that has tons of restaurants and pubs and food and shops and everything. Last time, we got there pretty early and loaded in early, so we had tons of time to explore that street. That was really fun. I’d like to do that again, but I guess we’re in a different part of Boston. That area is the only area we’ve been to, apart from the universities around it.

CL: I maybe shouldn’t say this, but I’m a huge Yankees fan, so I grew up despising the Red Sox. Last time we were in Boston was at the House of Blues right next to Fenway Park. It was very surreal to be right across the street from the Green Monster.

LD: Yeah, a lot of cool restaurants over in Boston that we’re excited to hit. My brother used to live there, so I used to go to Cambridge a lot. There’s a really cool jewelry shop that sells dope rose gold earrings that are simplistic, but really cool, so I would love to swing by there before we have to head out.

This interview has been edited for length and clarity

The Happy Fits third album Under the Shade of Green is currently available. Tickets to their upcoming show at Paradise Rock Club on December 16th can be found here.