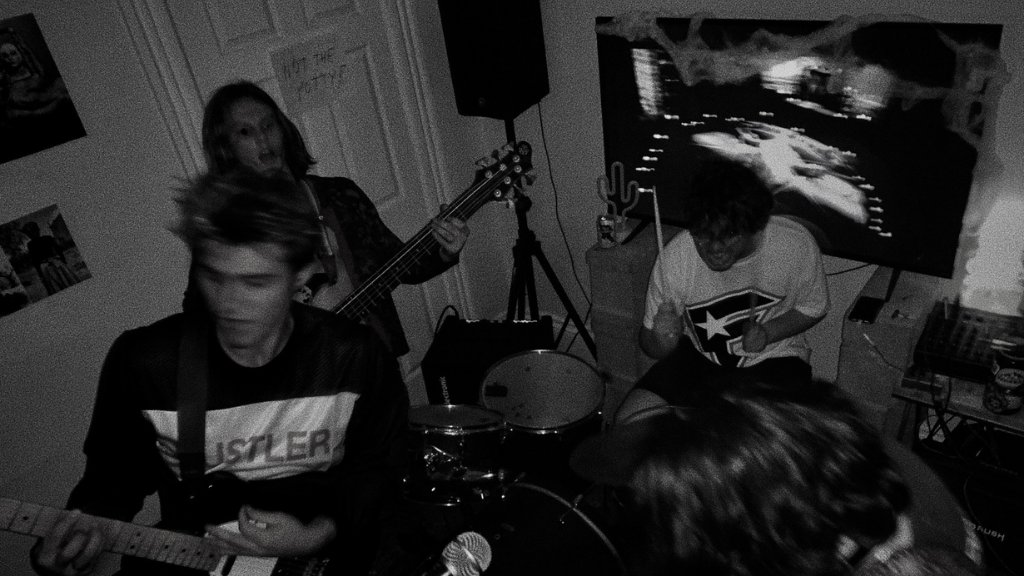 In this interview, Boston based band Mt. Greylock members Joe Messina, Max Hollenback, Preston Kra, and Gibran Mobarak talk with staff writer Kira Weaver about living in a house together, deciding to start to play as a group, and the process of recording their first EP RatCity which drops May 7th.

HOW DID YOU GUYS FIRST MEET?

MAX: I met Joe last year while playing soccer with people from school. He was roommates with Preston and Gibran already at the time. Last spring, I was living with other people that were leaving and they all needed a fourth roommate. I don't know who found this place though. (Motions to the house).

PRESTON: It was a luck of the draw sort of thing

JOE: Cause we missed out on another house, which in retrospect, thank God. This has worked out brilliantly for us. Band-wise though, it was really Preston that came up with the idea at first.

PRESTON: Yeah I saw Gibran, who's in another band called Trash Rabbit, and thought ‘I like rock music, I like playing live. We should do that’

JOE: And the Boston DIY scene is stacked. We were just eager to get in there.

SO WAS IT ALMOST INEVITABLE, ONCE YOU ALL BECAME ROOMMATES?

GIBRAN: I think so.

PRESTON: Everybody was a little shaky at first, but once we had a session...

MAX: Yeah, I don’t even remember it happening.

YOU MENTIONED EARLIER THAT IT STARTED WITH A RIFF?

PRESTON: The “Allston Panic” one, yeah. I was just playing that then Gibran got on the kit and started shedding out. Joe and Max were upstairs when they heard us.

MAX: Honestly, just Preston being loud in the basement often, because he had a lot of emotion to get out and Gibran with him and then yeah you can hear them from upstairs.

PRESTON: It was pretty organic. There was never a start day for the band, it just happened over time.

JOE: If that’s a day, then sure (laughing). I think also having the house and being able to have shows here.

YOU GUYS ARE NAMED AFTER THIS [HOUSE’S] STREET, RIGHT?

SO THE FIRST SONG WRITTEN WAS “ALLSTON PANIC?”

JOE: I think “My Heart, Your” was the first song finished. “Allston Panic” was quickly after that, and then “What's My Name?” By that point, we were kind of like ‘Alright, well, might as well keep—’

PRESTON: It was all super organic.

JOE: And the show too — the show helped; our first show together.

ONE SONG YOU GUYS PLAYED OFF THE EP, “MELT,” IT KIND OF DEVIATES FROM YOUR NORMAL SOUND.

JOE: "Melt" was really inspired by shoegaze. When you hear the mix that’s on the album, the vocals are very mixed into the overall sounds and that was kind of the plan. It’s different from all of the other tracks where the vocals are more out front. We wanted to use them as another instrument. It’s our most abstract song.

PRESTON: The inspiration for “Melt” was a vacuum.

JOE: It actually was a commercial I heard on TV. The jingle was in C and then I tuned the guitar all the way down to that weird tuning.

GIBRAN: It sticks out on the record but it fits.

JOE: That song was tough to get you guys on board for a little bit. The biggest thing with my songwriting is sometimes it can get drone-like.

PRESTON: No, I just had my shoegaze phase like a year ago, and you’re having yours now.

JOE: Also live, the cool thing about that song is in the recording it sounds super lush and very complex with all the layered guitar but we’ve found a way to make that sound and that wall of noise happen while performing, so it’s turned into one of my favorites to play.

DURING “MY HEART, YOUR” YOU MENTIONED THIS TIME DURING FILMING YOU TUNED IT TO DROP D, WAS THAT NEW?

MAX: I’ve only been doing that for the past month or so. The first time I played it like that live was like last weekend?

JOE: I feel like we’re continuously making the songs better even after they are released. You come see it live, you're gonna get the most updated version. I changed the beginning guitar in “My Heart, Your.” I like it a zillion times better than the recording.

PRESTON: We also changed the bridge of “Allston Panic.”

WAS THERE ANY ASPECT OF THE RECORDING PROCESS THAT REALLY AFFECTED YOUR SOUND?

GIBRAN: We all recorded at the same time instead of single tracking.

MAX: Yeah we were pretty adamant about that.

(All motion to agree with this statement)

PRESTON: I think that live sound really translates into the record and I think it makes it a better record.

JOE: And it also makes what we play live sound that much better because people are like ‘Damn this sounds just like the record’, but then we add those new touches like Max’s Drop D, or a different bridge, or a different rhythm guitar. And it just enhances the performances. It’s a good contrast.

WHAT DO YOU THINK THE BIGGEST MUSICAL INSPIRATION WAS FOR YOUR SOUND?

GIBRAN: I feel like Joyce Manor and My Chemical Romance for me, personally.

MAX: Honestly, nothing’s coming to mind because I don’t listen to that music. I haven’t listened to anything close to that at any point in my life. But I still love playing it and it still feels authentic to me. I feel like lots of artists say often that ‘I play this type of music all the time but never listen to it.’

JOE: Rock isn’t what I listen to daily either.That's the thing with us— what we all listen to everyday is different. And even if we aren’t intentionally pulling from that…

WHAT WERE YOUR BIGGEST NON-MUSICAL INSPIRATIONS?

JOE: For me, the way I function musically depends on the people I’m surrounded with and the environment that I’m in. I’ll go back to New Hampshire, and one would think you are in this middle of nowhere place. There's not a lot going on and you're alone with your thoughts. But the inspiration isn’t the same as being in this house and surrounded constantly by creative minds.

GIBRAN: I think for me it’s my job. I cook. I like cooking a lot. I think that’s definitely an inspiration I use, non-musical.

MAX: Definitely visual artists, like there’s some painter’s I really love. I almost went to study design instead of music. Dali is one of my biggest influences, Salvador Dali.

JOE: I mean we have a bunch of his stuff right in there. (Motions towards the house and the living room).

MAX: Yeah, it’s kind of random and weird but I love him a lot. It’s all super creative and subconscious, approach wise.

WHAT DO YOU WANT A LISTENER TO TAKE AWAY FROM YOUR MUSIC?

JOE: I don’t care at all. Whatever they want to pull from it, they can pull from it. I don’t want to put any preconceived notions into anyone’s head before they listen to it. That's the best thing about art in my mind, there’s no—

I grew up playing sports and in that world it’s all about boundaries. There’s a start and finish to it all. I love how there’s not a lot of that in art.

PRESTON: I just want them to feel something. Hate it or love it, as long as it’s not indifference.