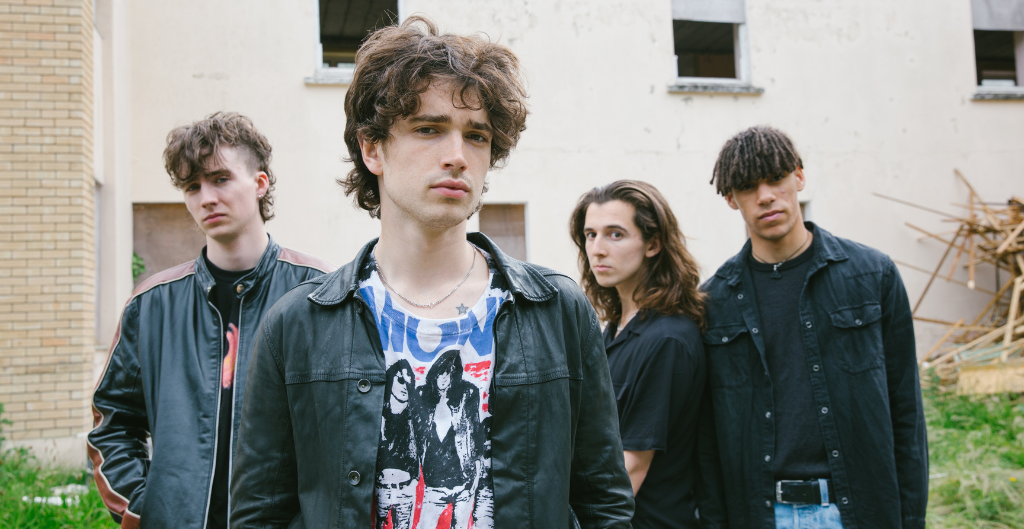 Dublin-based rock band Inhaler is having their biggest year yet. In this interview, half of the band — guitarist Josh Jenkinson and drummer Ryan McMahon — sit down backstage with staff writer Kira Weaver ahead of two sold-out nights performing at the Sinclair. They chat about what it’s like touring post lockdown, the song writing process for their latest single “These Are The Days,” and their love of Guitar Hero and dogs.

YOU GUYS HAVE BEEN TOURING AND PLAYING THE FESTIVAL CIRCUIT THIS SUMMER. THIS PAST WEEKEND PLAYING  OSHEAGA IN MONTREAL AND LOLLAPALOOZA IN CHICAGO–

COUPLED WITH YOUR FIRST TIME AT GLASTONBURY AND [YOUR] ARENA PERFORMANCE IN JUNE. WHAT IS THAT FEELING LIKE, BEING ABLE TO STEP ON THOSE STAGES FOR THE FIRST TIME?

JJ: It’s just mind blowing for us cause obviously when the lockdown happened we missed out on a whole year of doing that. It felt like we had been building it up for ages, and now it’s finally happening.

Ryan McMahon: I think we had done enough gigs that we had a really dedicated and loyal fanbase which we were so grateful for. They kept us going. Just being able to see it build and build online. Holding out for when we could play live again.

As we were playing Glastonbury, though, I think that is one of the most nerve-racking experiences of our entire lives.

JJ: It’s helped us in a way, because everything after playing Glastonbury wasn't half as nerve-racking.

YOU WRAPPED UP A NORTH AMERICA TOUR THIS PAST SPRING. WHAT DO YOU THINK ARE THE BIGGEST NOTABLE DIFFERENCES BETWEEN TOURING NORTH AMERICA AND TOURING EUROPE?

JJ: Oh, I don’t know. In Europe, it’s very different, cause they’re all different countries. You get a lot of differences every night in the crowd, the venue, the level of excitement. But in America, every single night, it’s consistent excitement and consistent energy.

AMERICANS GO CRAZY FOR THEM.

RM: They’ve got all the food from Europe here as well.

RM: No, I never said that! (Laughs). I feel like coming over to America, you got so many aspects of different cultures that blend together, into one. America has always been good at taking the best of the bits of a lot of other parts of the world. That we’ve seen anyways.

JJ: It was the band's dream — like every band’s dream that’s not from America, even the ones that are — to tour America. Once you do that, once you’ve done an American cross-country tour, you're solid.

DO YOU GUYS HAVE A FAVORITE MEMORY OR STORY FROM THAT TOUR, ONE YOU RECANT A LOT?

RM: The other day, at Lollapalooza in Chicago, we were playing our set. And I just for some reason, I looked over to the left of the stage. I think I was telling our monitor guy to turn someone up in my ear. And I look over  and I see two members of Metallica watching our set.

To which point I just kind of flipped and freaked out in my own little head, and then I just took it back and told myself to ‘Do you know what? Forget about it. I don’t need to– I’m not looking back over there for the rest of the show.’ That kind of was a surreal experience.

Recently we’ve been fortunate enough to meet so many people that inspired us growing up. For example, we’ve met Royal Blood a couple of times now. We saw [them] first when we were fifteen, and then years later we’re having a tequila with them. Even meeting Kings of Leon and them being so nice to us. This whole year has just been a fever dream almost. We’re living out a lot of things we had dreamt about during lockdown. I don’t know what next year is gonna be like.

DOING IT ALL AGAIN.

JJ: I hope! I think as Ryan said, we’ve just done so much and been in so many surreal situations. Nothing feels real at the moment. You’re just going through everyday thinking ‘Oh, that just happened. That should not have just happened. That’s amazing.’

YOU GUYS HAVE BEEN PLAYING TOGETHER FOR A WHILE. SINCE 2012, RIGHT?

RM: 2012 would've been when myself, Rob, and Eli met each other. We’ve known each other a very long time… since we were five.

BEFORE THAT, WERE YOU GUYS JUST PLAYING TO PLAY TOGETHER?

RM: (Talking to Josh) Before you joined, yeah kind of.

JJ: And then when I did join, for two years, we kind of just did small showcase shows that would be put up by groups in Ireland. So we never played any shows outside of Ireland, Dublin.

RM: And we begged all of our friends to buy tickets. Begged and begged.

AND YOU GUYS RELEASED YOUR FIRST SONG “I WANT YOU” IN [2017]. I WAS LISTENING BACK AND THAT FIRST RELEASE SOUND A LOT MORE INFLUENCED BY SHOEGAZE THAN WHAT YOU ARE RELEASING NOW. DO YOU THINK YOUR SONGWRITING PROCESS HAS MOLDED OR BETTER SHIFTED THROUGHOUT THE YEARS? AND IF SO, HOW DO YOU THINK IT DIFFERS FROM THAT ORIGINAL PROCESS?

RM: We wrote that song when we were 16 or 17. To be honest I can’t even remember how we really formed it. There isn’t one really one set formula that we follow. It can be us jamming in a room or someone’s fiddling about their laptop or [it] can start with a drumbeat… and then eventually we’ll all come together to try to work out an idea.

We’d think it’d be kind of boring if there was just just one person writing every single thing, you know? It keeps it interesting.

JJ: That was a very happy accident. Thank god that happened. It was actually very quick. A natural. We had a rehearsal spot in Dublin that we got towards the end of the lockdown—

THIS WAS WRITTEN DURING LOCKDOWN?

JJ: Yeah, just at the very end. We were all in this room had everything set up, and it was brilliant. Thought ‘Might as well write songs.’ I think we did three songs on that day, or just three ideas. And then, this one just happened. We went into the studio with our voice memos

RM: We flew to the studio the next day pretty much.

JJ: Playing them back, our producer goes, “Oh, that one’s good.” And we kind of look at each other… (Mimicking their past hesitant faces)

JJ: And then we recorded it and were still hesitant. It wasn’t till we played it to outside ears. People responded, “This is actually really good.” After that we had a long look at it. Made it a bit better…

RM: Love that song, especially love playing it live now. Seeing it grow and grow. Seeing the fans love it.

LAST QUESTIONS BEFORE YOU GUYS GET READY FOR THE SHOW. WHAT ARE YOUR BIGGEST MUSICAL INSPIRATIONS?

RM: For me, personally, it’s probably David Bowie. I mean I've got a frickin’ tattoo of him. (Shows tattoo on forearm). So this kind of solidifies him as my biggest inspiration. With each of his albums, he always had this thing where you’re never quite certain which direction he was gonna go into. He’s got this uncertainty about him that kind of just always leaves the listener guessing.

JJ: At the moment, I genuinely don’t know. It feels like a whirlpool over the years. Listening to music has become a very different thing. Not being inspired but instead just soaking it in.

The person who made me wanna play guitar though is Jimi Hendrix. You just see videos of him and he’s an enchanting person you want to understand a bit more. The way of understanding him is learning what he does. Learning that language.

WHAT AGE DID YOU START PLAYING AT?

RM: That was our musical education growing up.

RM: All the guitar Heros, especially that Metallica one.

DID YOU HAVE THE DRUM PADS?

RM: I never actually had the pads. Kind of missed out on that. Don’t think it ever too late, though.

JJ: I used to go to my friends house just to play the pads. He had the whole band.

YOU HAVE TO GET IT FOR THE TOUR BUS–

JOSH: We had it on the tour bus!

RM: We did a tour of the UK last October and on the first day we went out to a second hand game shop. Bought the guitar, and we found every single–

RM: Our tour manager, he hates all of it. He’s just there, just trying to sleep at night. (Both laughing now)

WHAT ARE YOUR BIGGEST NON-MUSICAL INSPIRATIONS?

RM: My second biggest love next to music is cinema. Might be a bit of a generic answer but I’d say Paul Newman or Al Pacino. One of them, yeah. Paul Newman’s in my favorite movie Butch Cassidy and the Sundance Kid. I wanted to be an actor growing up but people told me it was a little bit far fetched so I became a musician instead.

JJ: This is stumping me. I’m gonna have to say something like dogs. Being around dogs at the moment is bringing me so much joy.

RM: Do you know what, scrap my answer— dogs is brilliant!

FINALLY, DO YOU GUYS HAVE ANY WORDS OF WISDOM?

WHY ‘DON’T WEAR SHORTS ON STAGE?’

JJ: No one wants to see that.

JJ: That would be a crime against humanity if we wore shorts.

RM: For us, the best advice we ever got was from our producer. He basically just came to us and said “You’re really bad. You need to practice— loads.” And so we did.