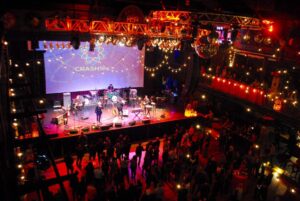 The House of Blues was decked out Saturday evening in ornate and oriental décor, with flickering artificial candles lighting up the Main Stage’s standing room. Inside, an eclectic audience meandered the venue, and backstage, an even more eclectic lineup of artists prepared for their time in the spotlight. That could only mean one thing: the CRASHfest World Music festival had returned for its second year.

Hosted by Cambridge’s own World Music CRASHarts, the indoor festival featured nine bands on three stages, starting at 5:30 that afternoon. Emperor Norton’s Stationary Marching Band got the evening started by parading across the House of Blues, thus going beyond the “stationary” nature that their name would imply. The ensemble stood in the middle of the standing room and delivered two festive numbers, swaying back and forth before exiting to the left side of the stage.

CRASHarts director Maure Aronson promptly took the stage to welcome the audience and then introduce the next act, Debo Band. Hailing from Jamaica Plain in Massachusetts, they transcended borders in a 50-minute set that incorporated a touch of reggae and an improvised homage to Duke Ellington alongside their energetic brand of Ethiopian music.

Debo Band’s singer, Bruck Tesfaye, was bubbly and charismatic, jumping up and down and kicking his feet to the beat on multiple occasions. Layering soupy guitar lines, frenzied drums, and a bombastic tenor sax solo into the mix, the energy in the room was palpable. Tesfaye jumped down into the crowd several times to sing face-to-face with members of the audience, and commanded their attention with his unpredictable and fun stage presence. 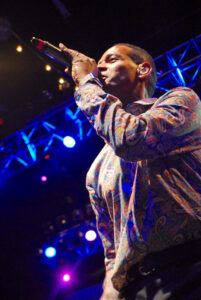 The 9-piece band balanced several different styles over the course of their set, but their sound and style was always consistent. Tesfaye casually patrolled the stage with a skip in his step, and the band would respond to the music by crouching in unison, prompting the audience to do the same. Nine songs later, they departed.

The Main Stage audience took a quick break before welcoming Orkestra Mendoza, all the way from Tuscon, Arizona. The eight-member ensemble came prepared to deliver a series of up-tempo, festive Latin tunes that inspired the audience to dance, shout, and on multiple occasions, shout “Sí!” along with the band.

The band’s “conductor,” Salvador Duran, looked like a mad musical genius on stage, decked out in all black, with the exception of his ample white beard. They demonstrated their technical ability, navigating danceable tempo changes and mixing thumping grooves with sultry slow-dances.

They also proved to be masters of audience interaction, as the band sent a trumpeter out into the crowd to trade melodies with the musicians left on stage. Nearly without exception, the entire standing room was full of swaying bodies, and even the upper balcony had begun to fill up, with several couples dancing to the music and making merriment. Even without moving too wildly on stage, Orkestra Mendoza managed to be an entertaining sight as well as a compelling sound that drew in its audience and guided them through what easily could have been a party under a Tijuana sunset.

After 11 songs, they departed with one last “muchas gracias” and gave way to the next act, which was actually two bands together. At 8:30, the New York-based NOW Ensemble took the stage, playing a delicate intermingling of flute and upright bass. After a calming and emotive piece, they invited the band San Fermin to the stage, and the two groups dove into their set. “This is a very special show this evening,” explained singer Charlene Kaye. 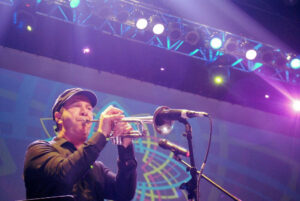 Every song was a journey, full of melodies and English lyrics – an oddity compared to most of CRASHfest’s artists. The 50-minute collaboration evoked a sense of grandiosity as they slowed the tempo for the night and focused more on the beautiful than the danceable. Totaling 12 members between them, San Fermin and NOW Ensemble blended in such a way that, to the first-time listener, they could have been the same band.

Last but certainly not least, the groovy four-piece act Bombino hit the stage to cap off the evening’s festivities. Decked out in colorful and traditional garb, the band quickly displayed their diversity, both musically and otherwise. After two groovy tunes that evoked influence from both Carlos Santana and Bob Marley, they greeted the crowd in several different languages.

As opposed to some of the bands that came earlier in the night, Bombino’s focus was less on performing songs and more on exploring musical ideas. Several numbers began with the feisty guitarist bent over his effect pedals, searching for just the right sound before the next jam could commence.

For most of the set, the quartet let the music do the talking, with little to no discussion in between songs. However, nine songs into the set, the bass player took a moment to mention that everyone in the band was Muslim and based on the current state of politics in this country, they weren’t sure if they’d be back in Boston soon. 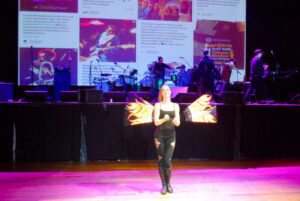 Near the end, the crowd was treated to the only encore performance on the Main Stage, which featured an unaccompanied guitar solo before the rest of the band returned for one more groovy jam. After sharing 14 songs total, the band exited to much applause, putting an end to the festival just past 11 o’clock.

All things considered, none of the artists were massive success stories here in the United States, but based on the talent brought to the House of Blues Main Stage Saturday night, one never would have known. Each set was full of energy, musical ability, and most importantly, fun. The CRASHfest served up a well-rounded sampling of talented and enjoyable musicians, communicating a subtle message oflove through the best universal language our planet has ever known: live music.