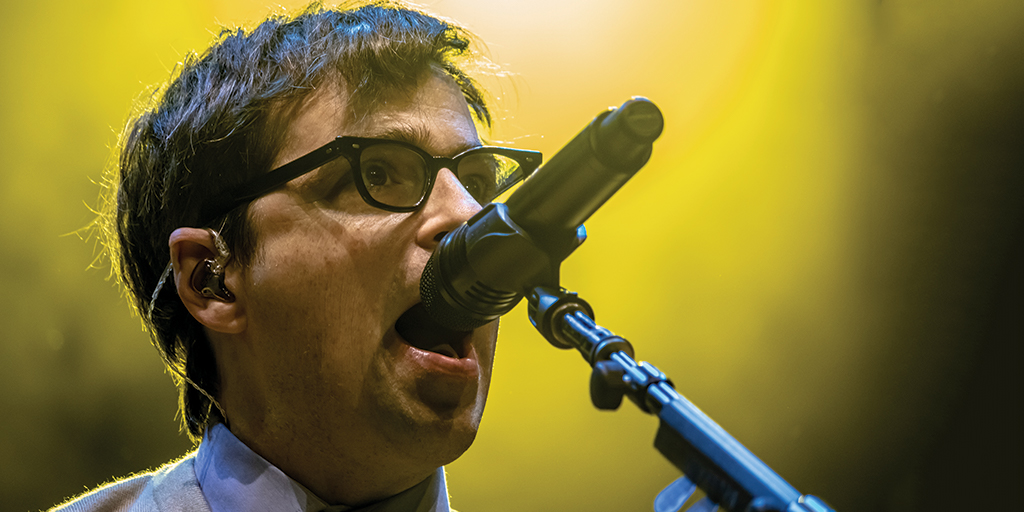 Written and Photographed By Lukas Markou

We're cruising into the halfway point of Summer. Last night, down at the Xfinity Center, twin pillars of 90s alternative rock, Pixies and Weezer performed as part of their huge North American tour. Completely unfazed by the flash flood warnings that tried to threaten the evening, the packed sea of fans only slightly squirmed in the on and off thunderstorms.

Pixies frontman, Black Francis, brought the band out of a cloud of golden fog.

Suddenly, the rain didn't matter, and they began to jam. As the Pixies rocked out to "Monkeys Gone to Heaven," fans began ditching their cheap plastic rain ponchos and fully embraced the drenching rain. Black Francis' bald head, though covered under the roof, was just as soaked with sweat as the audience was with rain.

The giant LCD screens around the venue rendered all the lights in a harsh green and gold color scheme reminiscent of the grungy 90s MTV feel that Pixies rose up in. It feels like they haven't aged a year. Beautifully cued golden spotlights guided the audience to different members of the band throughout the show, shining light on every solo and individual performance.

For one solo, lead guitarist Joey Santiago pulled out his amp cord and rubbed it around on his fedora, sending bursts of raw distortion out of the speakers. This was the first time I heard a solo played with a hat. The Pixies concluded their show with an acoustic rendition of "Where is My Mind" in front of a strobing screen of star-like lights making for a perfect send off into the second half of the show for Weezer's turn.

A massive, intricate set was revealed that made the stage look like a diner.

All dressed in sweater vests and ties, Weezer kicked off their show with powerhouse classics "Buddy Holly" and "Beverly Hills." Soon after, Rivers Cuomo announced it was, "time to go back to 1994," as the set of a garage lowered from the rafters. Old stereos, laundry machines, and old rock posters littered the stage.

The band ditched their classy outfits for graphic T's bringing us back to the beginning of Weezer with an always strong performance of "My Name is Jonas," the first track off of their first album, The Blue Album.

As Cuomo moved a few years further into Pinkerton, playing "Falling For You," he reminded the crowd that he wrote the song while attending Harvard. The 90s wasn't far back enough for Weezer however, as the band covered 1967's "Happy Together" by The Turtles, while Rivers disappeared offstage on a razor scooter.

He remerged in a sailors outfit on top of a boat shaped parade float that rode out into the middle of the crowd.

This moment had to be the peak of the whole night as Rivers played "Island in The Sun" alone onto of this float with an acoustic guitar, wrapped by a sea of iPhone flashlights filling in as lighters.

I definitely wasn't the only one who cried. As if Cuomo knew the emotional impact of this performance, he brought us all back with a hilarious acoustic cover A-ha's classic "Take on Me." Afterwards, Rivers rejoined the rest of the band on stage, now donning a sleeveless Nirvana tee, giving a subtle salute from Weezer and the Pixies to another defining band of the 90s.

Cuomo did his best Kurt Cobain impression, inserting "Smells Like Teen Spirit" lyrics into Weezer's song, "Burndt Jamb." Weezer ended the night with "Say it Ain't So," and sprinkled it with a verse of Black Sabbath's Paranoid. That was sung this time by guitarist Brian Wilson.

Through all the set and costume changes, the one constant was the brightly lit Weezer logo that hung over the stage for the whole show.

It's hard to deny that the Pixies and Weezer are moving away from the good side of 40.

But as these 90s icons move towards becoming "dad rock," these two powerhouses of alternative rock still seem to capture the simultaneous angst and humor of early adulthood. They may be old man bands soon, but for now, they're ageless and still able to give a timeless performance.

Lukas Markou is a photographer and reviewer for WERS. Studying Visual Media Arts at Emerson College, he has a focus on "destroying the competition."