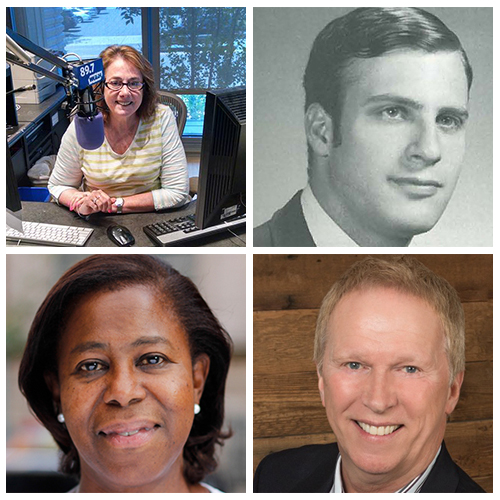 WERS 88.9 FM will welcome four new inductees from the world of radio, news, and music promotion into its Hall of Fame during Emerson College’s upcoming Alumni Weekend.

Lifeset is founder and president of Peer Pressure Promotions, and over the past 40 years has promoted rock bands, heavy metal acts, New Age music, and now, smooth jazz. He started his career in radio, then transitioned to doing Northeast regional promotions for a number of West Coast record labels. In 1976, he moved to Los Angeles to become national album director for United Artists.

Thomson began his career as a disc jockey while still a student at Emerson, with gigs at stations in Laconia, New Hampshire, and Denver, but his very first gig, at Emerson’s WECB, was working for station manager Vin Di Bona ’66—Emmy Award-winning producer, Emerson Trustee, and 2016 WERS Hall of Fame inductee. Since 1973, Thomson has crisscrossed the nation, in markets such as New York, Minneapolis, Philadelphia, Detroit, Washington, Baltimore, and Sacramento. Most recently, from 2012 to 2016, he could be heard on morning radio at SoftRock989 in Fresno, California, where he’s now launched a new career in real estate.

Coombs is operations manager of CBS Radio News, where she’s worked for more than 30 years producing breaking news, coordinating special events, and staffing the copy and assignment desks. She got her first full-time news job as a local news reporter/anchor at WVOS in Monticello, New York. She did news for a station in Charlotte, North Carolina, until 1981, when she moved back to New York to work for RKO Radio Networks before heading to CBS Radio.

Daigle is associate director of media relations at Wellesley College. Prior to that, she was afternoon/evening general assignment reporter for WGBH 89.7 FM, where she previously hosted the public radio station’s All Things Consideredbroadcast. Earlier in her career, she covered Capitol Hill, the White House, and the Supreme Court for the Unistar Radio Network in Washington. Through the 1980s and ’90s, she worked as anchor/reporter for a number of Boston radio and TV stations, including WRKO, WBZ, and NECN/Charter TV3.

Welcome to the New WERS.org